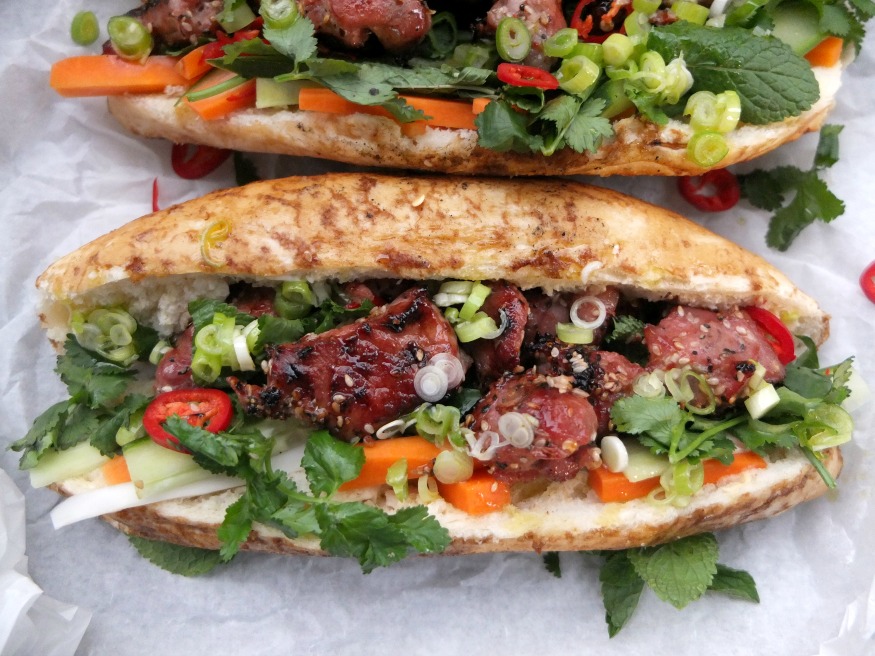 If there’s one thing I’ve learnt about bánh mì, it’s that the variations are endless; the bread comes in tiny skinny baguette shapes with just pâté inside, or sometimes in round ‘bap’ shapes. Pickles are not limited to carrot and daikon, and protein not to pork, chicken or fish. I actually saw a version on YouTube stuffed with dumplings. I KNOW. 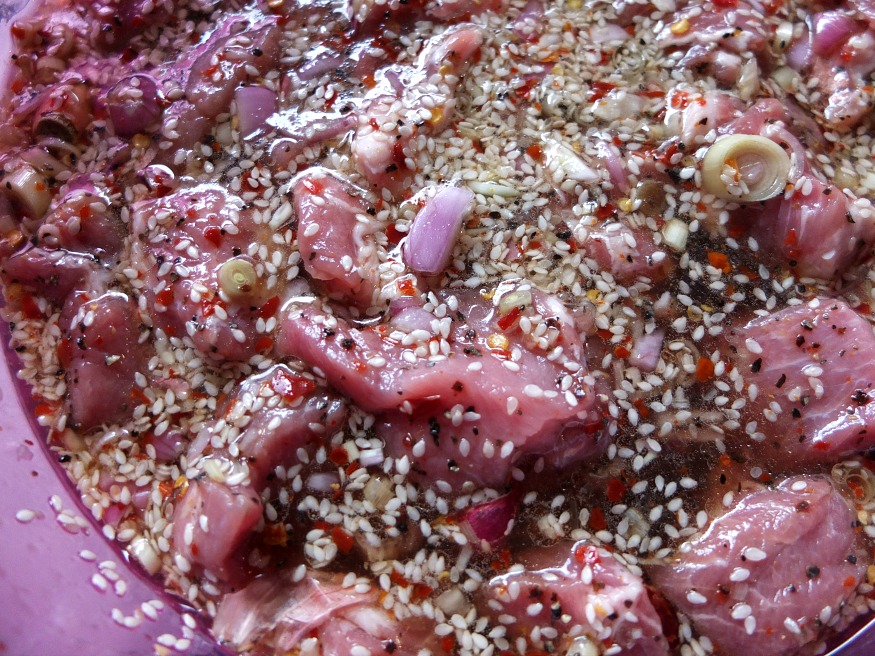 Knowing that the fillings are so readily adapted to the whims and fancy of the maker freed me up a little bit to have some fun with this recipe. It had to be grilled because you know I love my barbecue and if there’s one enduring memory I have from Vietnam it’s the scent of pork grilling on the streets. My recipe uses diced pork shoulder, which grills nicely, staying bouncy and tender but also retaining some chew. Important ingredients in the marinade are fish sauce, lemongrass, sesame seeds and… a can of Ting. Yeah, that’s right, this is a South London special. For those of you further afield, Ting is a soft drink that’s popular in the Caribbean (and South London), flavoured with Jamaican grapefruit.

I’ve done quite a classic pickle with carrot and daikon but one time I ran out of radish and used cauliflower stalks and that was good too. Like I said, this should be a free and easy sandwich. I do, however, recommend adding the scotch bonnets to the pickle – the vinegar mellows them and you’re left with the fruity flavour. Another local touch. 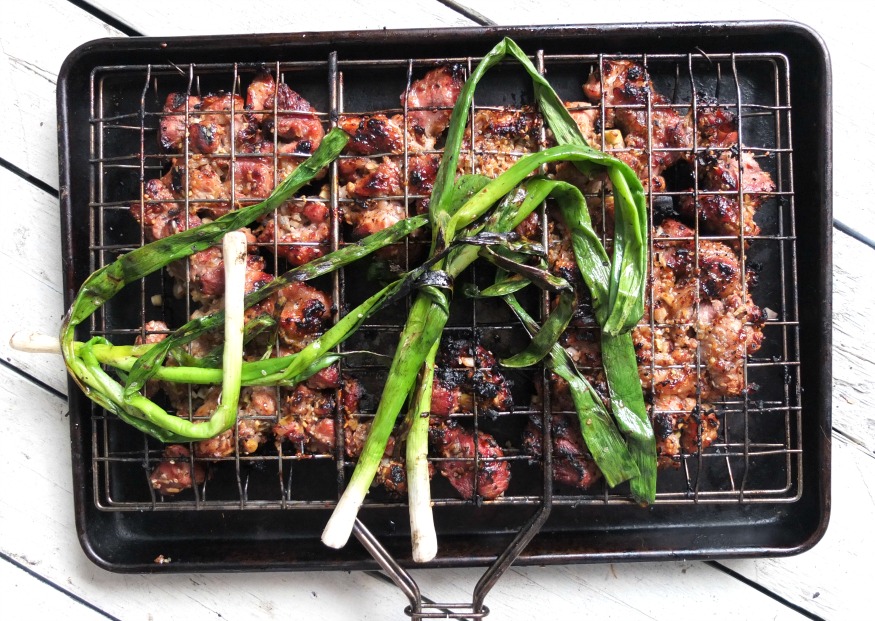 Finally, there’s the bread, which is notoriously tricky to replicate at home. These are simply shop bought baguettes, brushed with soy and oil and grilled on the barbecue, as per a regional variation I found out about on Youtube. It’s from Lạng Sơn, apparently, and it’s great because you get that ultra-crackly crust you want from a banh mi and it’s extra savoury from the soy.

There are a lot of myths surrounding the bánh mì and how it’s made (particularly the bread) but if there’s one thing I’ve found out it’s that this sandwich really isn’t as complicated as people think, nor are its ingredients set in stone. 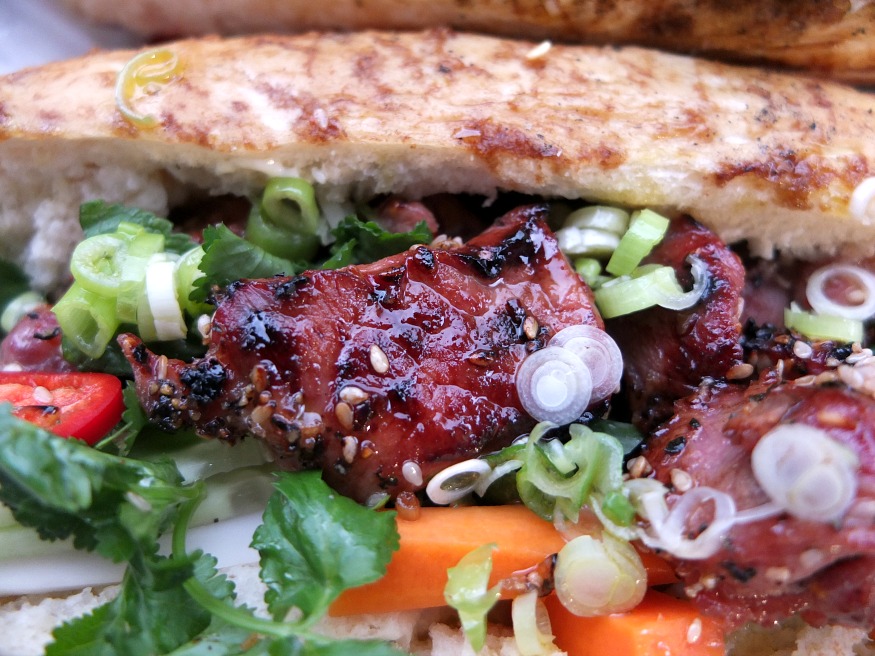 You can marinate the meat the night before if you like but an hour or so is fine with pieces of meat this size, to be honest. You can either skewer the meat or cook it in a cage (the same thing you’d use to cook fish), which is what I do.

1 can Ting (I guess the nearest substitute would be Lilt)
3 banana shallots
2 stalks lemongrass, hard outer bit removed
2 tablespoons brown sugar
1 tablespoon good sea salt
1/2 tablespoon black pepper
1 teaspoon MSG (optional)
1 tablespoon honey
3 tablespoons fish sauce (Three Crabs is the one I use – you can buy it in Asian supermarkets but obviously use whatever you can get)
1 tablespoon sesame seeds
1/2 tablespoon vegetable or groundnut oil
1 tablespoon regular chilli flakes

To make the marinade, mix all the ingredients together and combine with the pork. To cook the pork, prep a barbecue for direct grilling. When the flames have died down and the coals are covered in white ash, it’s ready.

Get your meat ready in the cage in a single layer (or on skewers) and cook, flipping frequently until just cooked through and caramelised on the outside – around 10 minutes.

Brush the baguettes with the oil and soy mixture and briefly grill until crisp.

Cut the baguettes open and scoop out some of the fluffy insides (room for more filling), then spread one side with butter and one side with mayo – both GENEROUSLY. Don’t skimp, you will ruin the sandwich.

Layer up with cucumber, pickle, the pork, loads of fresh herbs and the spring onion oil on top. Eat – like you mean it.