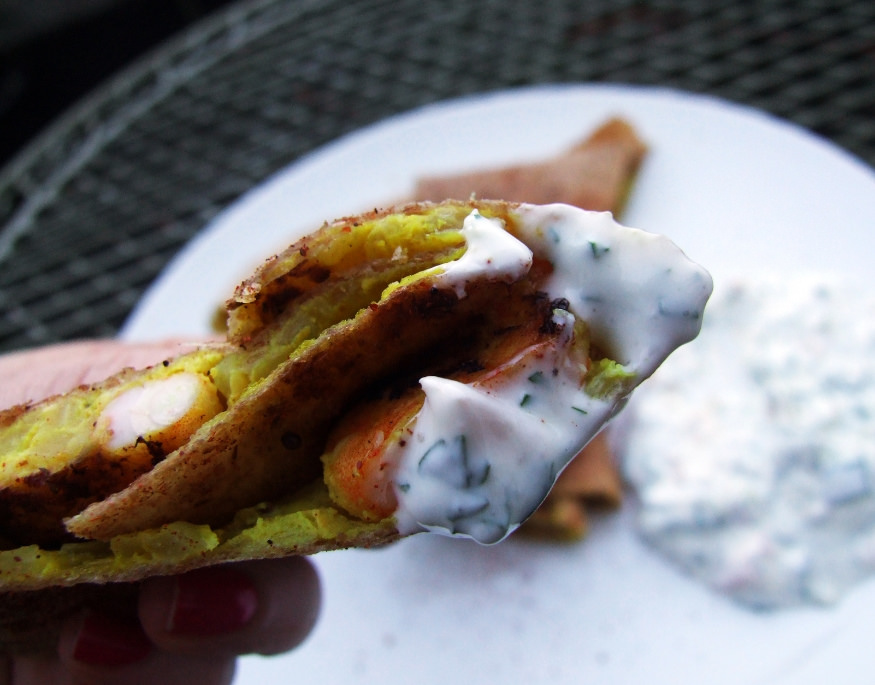 The tava is still my favourite new toy. For a while, I didn’t even put it away but just let it sit on the worktop so I could look at it more, like a new pair of shoes that you just can’t put in the cupboard. I started basic with chapatis and then felt ready to move on to parathas. It was supposed to be a gentle learning curve until I spotted this gorgeous stuffed version; it had to be done.

This is from the brilliant ‘Indian’ by Das Sreedharan; hopefully I won’t get into trouble for publishing another of his recipes. I can’t understand why the book isn’t more popular to be honest. I found mine for a stupidly low price and quite a few others have told me how they found it in a bargain bin. Das is from Kerala and it’s packed full of South Indian recipes; coconut, curry leaves and mustard seeds are predominant flavours throughout.

Apparently, this recipe is based on “the popular Ceylonese tradition of flat, thin bread dough stuffed with…seafood masala.” You make the paratha dough (wholemeal flour and oil) and then slap it on the hot tava before smearing with the mix of  prawns, egg, onion, chilli and spices. This cooks briefly and then you flip so that the coating sears and sizzles instantly on the tava. You flip again and then roll it all up.

They are dangerously moreish. Crisp paratha and soft, spiced stuffing, fragrant with the essential curry leaf; every now and then a succulent prawn. It’s really tempting to re-make and pack ’em to bursting but this is one of those times to resist – knowing when to stop and all that. They look weird while you’re cooking them (a bit like someone sicked up on a paratha – there’s no denying it), but once rolled, we’re talking high quality stuffed carb here – we ate four each in one sitting and yearned for more.

I suggest you make a steaming great heap of them. There’s nothing else for it. You won’t need any accompaniments except perhaps something to dunk them into – they’re a meal in themselves.

To make the paratha dough, put the flour in a bowl and gradually stir in the oil and about 150ml water to make a soft, pliable dough. Knead for 3-4 minutes, then return to the bowl, cover and set aside for an hour.

To make the filling, heat the oil in a frying pan. Add the mustard seeds and when the start to pop, add the ginger, onions, chilli and curry leaves. Cook over medium to low heat for 5 minutes, stirring every now and then until soft. Add turmeric and salt and cook for 1 minute then add the prawns until pink and cooked through. Remove the mix from the pan and set aside.

Divide the dough into 8 equal portions. Roll one into a ball before rolling out into a circle as thinly as possible. It should be paper thin and about 8-9 inches in diameter.

Heat a tava, griddle or frying pan and brush with oil. When hot, slap on a circle of dough (the heat should be medium). Cook until it starts to turn golden. Stir the eggs into the prawn mix, lower the heat and then spread 3 scant tablespoons onto the paratha. Leave until the egg is pretty much cooked and then flip, searing the mix onto the paratha. Wait until it is stuck well on there before you flip again and cook briefly. You want it nicely golden underneath.

You now just roll it up. I kept mine warm in a very low oven while I made the rest. I served them cut into two or three pieces each with a yoghurty dipping sauce which had some coriander, chilli and lemon juice stirred through (I think). A dusting of chilli powder on the parathas is really good.