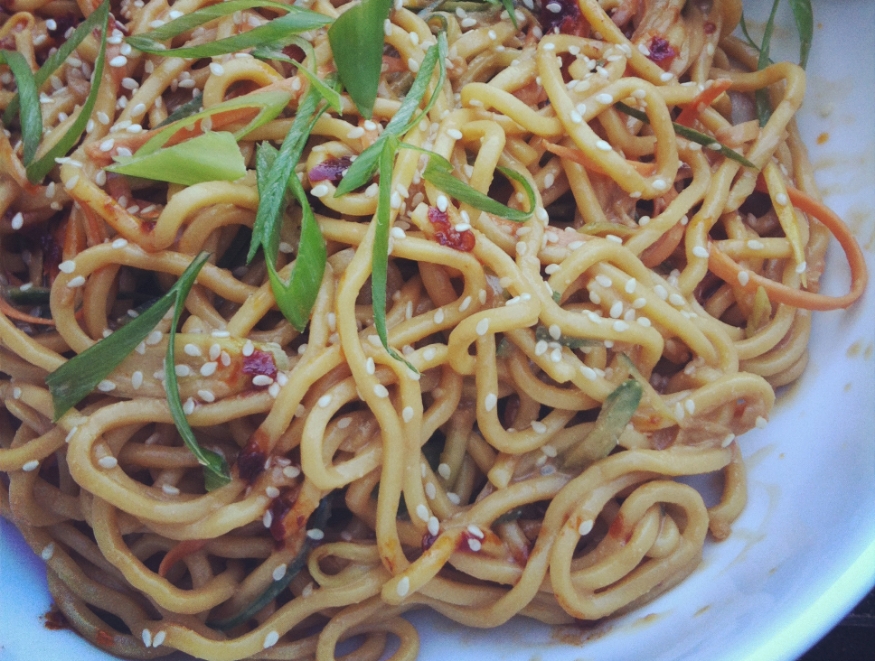 I refuse to shun big bowls of carbs during summer, although I will concede that a steaming hot noodle soup or heavy pasta eaten in the blazing sun would be a little… sweaty. This is a cold noodle dish I’ve been enjoying for ages now; perfect hot weather carb binge material.

The predominant flavour is, DUH, sesame, which comes from, ideally, Chinese sesame paste. Tahini could also be used, although its flavour isn’t as strong so it needs bumping up with extra sesame oil. In the absence of Chinese sesame paste, however, I would recommend using peanut butter; it’s rather a nice variation.

The noodles are mixed with crunchy slivers of shredded cucumber and carrot. I also added some pickled mango because I had it around after a recent spree in the Asian supermarket; it’s considerably less pickled than one would expect from something labelled as such but it has a pleasing acerbic funk nonetheless.

The sesame dressing makes for one slippery bowl of noodles; I got into a right mess eating them. Catching myself in the mirror I marvelled at the way the sun had really really brought out my freckles. Then I realised my face was just covered with flecks of sesame noodle sauce…

Cook the noodles according to packet instructions, drain and rinse them under cold water until totally cold. Toss them with the sesame oil and set aside.

Heat a little oil in a small pan and gently cook the ginger and garlic for about a minute.

Mix together the soy sauce, sesame paste, rice vinegar, sugar, chilli oil, garlic and ginger and then thin it out with water until it is the consistency of a dressing. You want it to coat the noodles but you don’t want it too thin either.

Pour the sauce over the noodles then toss with the spring onions, carrot, cucumber and pickled mango, is using. Garnish with extra chilli oil, a little more spring onion and sesame seeds.