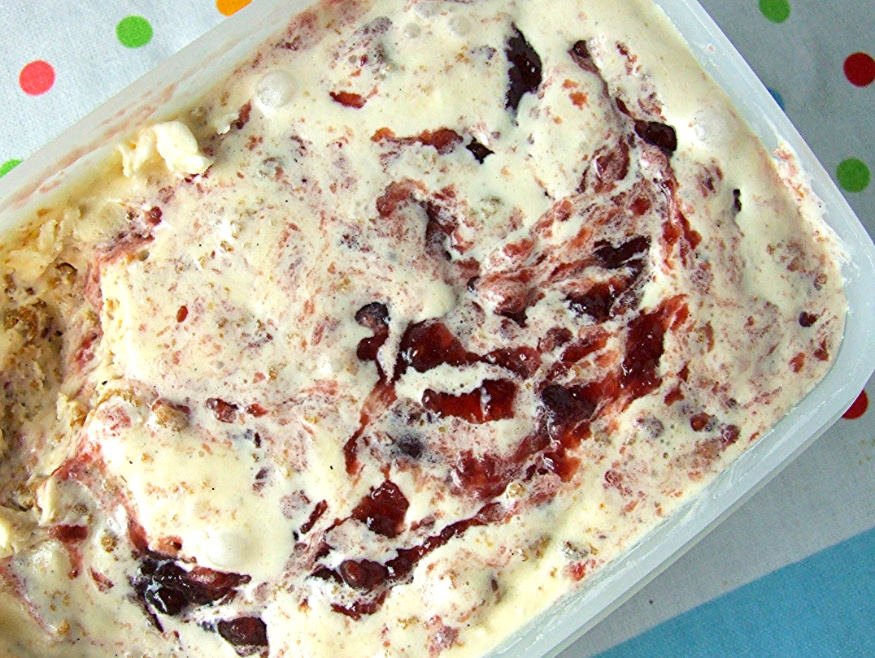 Brown bread ice cream might sound weird but it’s actually one of the best flavours ever invented. Fact. Crumbs are caramelised in the oven with brown sugar and butter until gooey malt; the edges crisp and the centre remains soft so the final effect is like Ben and Jerry’s cookies n cream with chewy, dough-like pieces flecked throughout.

I got thinking along the lines of toast and jam; lots of nutty caramel from the crumbs and a ripple of sweet (high-fruit) raspberry jam running through. This is about as old English as it gets: a Victorian recipe with a ripple in it.

(I used Keiko’s recipe as a starting point)

4 medium egg yolks
45g caster sugar
1/2 tablespoon vanilla paste (I used Nielsen-Massey vanilla paste from a jar but you can use half a vanilla pod or a little vanilla extract)
80g crust-less wholemeal bread (make sure it doesn’t have any seeds)
1 teaspoon cornflour
250ml semi-skimmed milk (use whole if you want to but I don’t think it necessary for this recipe)
40g butter
50g light brown sugar
250ml double cream
High-fruit raspberry jam (not too much sugar basically), for rippling

Whiz up the bread to make crumbs. Melt the butter then mix it with the crumbs and light brown sugar. Spread this mixture out on a baking sheet and bake for about 15 minutes, until the crumbs are crisp. They may remain a bit soft and chewy in the middle but this is a good thing. Allow them to cool completely then break them up into crumbs again; make sure to leave some big bits.

Pour the milk into a heavy-based saucepan, add the vanilla paste and bring to the boil. Remove from the heat and leave for 15 minutes to infuse.

In an electric mixer or in a large bowl with a hand whisk, beat the egg yolks, sugar and cornflour until thick and pale. Pour over the hot milk very slowly, whisking constantly. Return the mixture to the pan and cook it over a very gentle heat, stirring all the time. After a while the custard will begin to thicken slightly; when it coats the back of a spoon it is ready. That’s at 80C if you have a thermometer. Cover with a cartouche of greaseproof paper and leave to cool.

Stir the cream into the custard, tip into an ice cream machine and churn until thick. Stir the crumbs into the mixture, churn for 5-10 minutes until ready to serve. If you let your ice cream get too thick before you’ve added the crumbs, just stir them in by hand. Tip your ice cream into a freezer proof tub. If your ice cream is rather soft at this point, stick it in the freezer for an hour before adding your ripple. To add the ripple, take a tablespoonful or so of the jam and put in a bowl, mix it very well with a spoon to loosen it up. Put dollops of the jam on top of the ice cream and use a skewer to create a ripple effect.