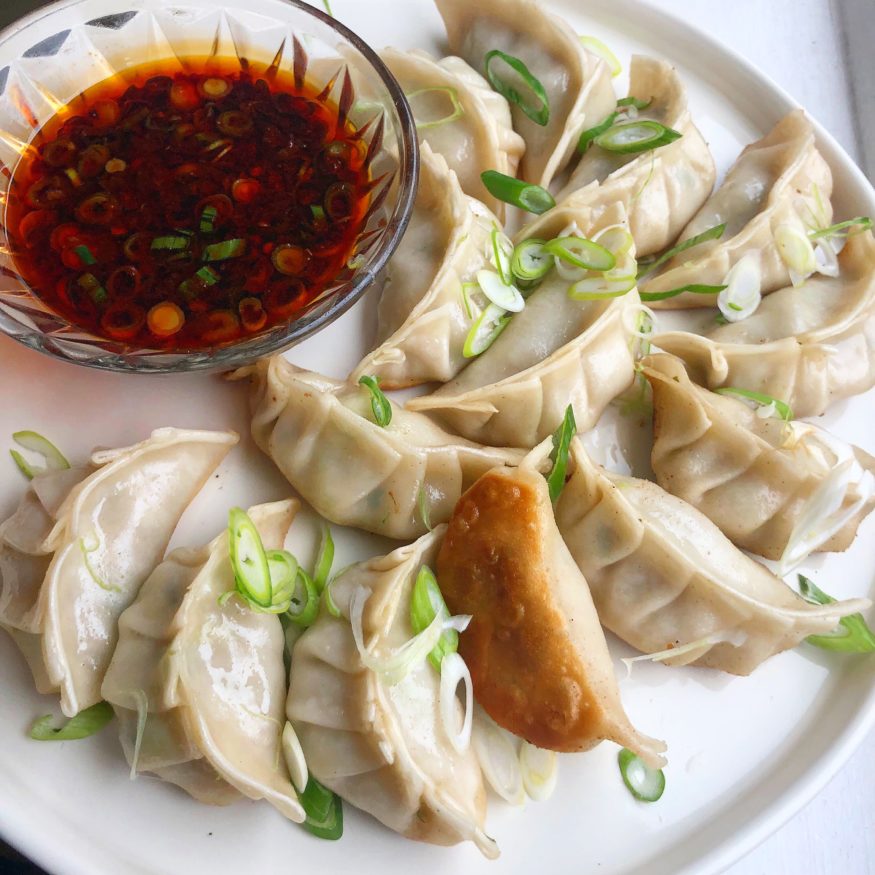 I have accelerated rapidly from ‘just adding sprouts to a few dishes in small quantities’ through to ‘adding them to everything including those I promised I wouldn’t’. A pal pointed out I’d once lamented the overuse of these mini cabbages saying – and this is a direct quote – ‘God help us but it’s only a matter of time before someone dishes up a sprout Caesar’.

A sprout Caesar is the last recipe I posted on this website.

So yes, fine, I have given in to the sprouts because I feel like they’re just so much more interesting now I’m shredding them, which is ridiculous because I’ve been doing this for years. I’m adding them to fried rice, coleslaw, gözleme, CAESAR SALAD and now dumplings in lieu of cabbage, with pork.

I’m going to try making my own dumpling wrappers next time because the frozen ones tend to get brittle around the edges which makes them a bit harder to seal. Other than that, it’s very simple. You will probably have filling leftover and I suggest you fry it and eat it on top of rice for a quick and satisfying lunch the next day.

This is quite a basic recipe which you can add to for e.g. some rehydrated dried mushrooms such as shitake would boost the umami or you could change the sprouts for the more traditional cabbage, add some minced prawns and so on.

Serve with a dipping sauce made from 3 tablespoons dark soy, 2 tablespoons black vinegar, a teaspoon sesame oil and a little diced ginger and chilli – or whatever you prefer! Often I add chilli oil.

Plunge the shredded sprouts into a pan of boiling water and when they come back to the boil, drain and refresh under cold water. Dry thoroughly.

Mix the pork with the sprouts, chives (or spring onions), light soy, sesame oil, ginger, garlic, white pepper, sugar and salt. You can cook a small piece at this point if you want to check the seasoning.

Take a dumpling wrapper (keep the open packet underneath a damp tea towel to prevent them drying out) and place a teaspoon of filling into the middle. Wet the edge of the dumpling wrapper with the cornflour and water mix) and then bring up the edges. Use your middle finger to push one edge of the wrapper and make a pleat, closing with your opposite thumb (this is much easier than it sounds when you have a go at it). Repeat to make as many pleats as you like, then do the same on the other side. If you don’t want to pleat the dumplings, just press the edges together. I just remembered my mate Lizzie has a video on her blog!

Repeat with all the wrappers. Press the finished dumpling down onto a lightly floured surface to give it a flat bottom, then repeat until all the filling is used up. To cook, heat a lidded frying pan (preferably with a heavy base) over medium heat and add 1 tablespoon of oil, brushing to distribute evenly. Arrange the dumplings in a circle until the pan is full and fry for a couple of minutes until the bottoms have browned. Carefully splash in a couple of tablespoons of water – it will spit and hiss furiously, so put the lid on. Steam the dumplings for around 3 minutes, adding another splash of water if it runs dry. Check the dumplings are nicely browned on the bottom. Serve the dumplings with the dipping sauce.