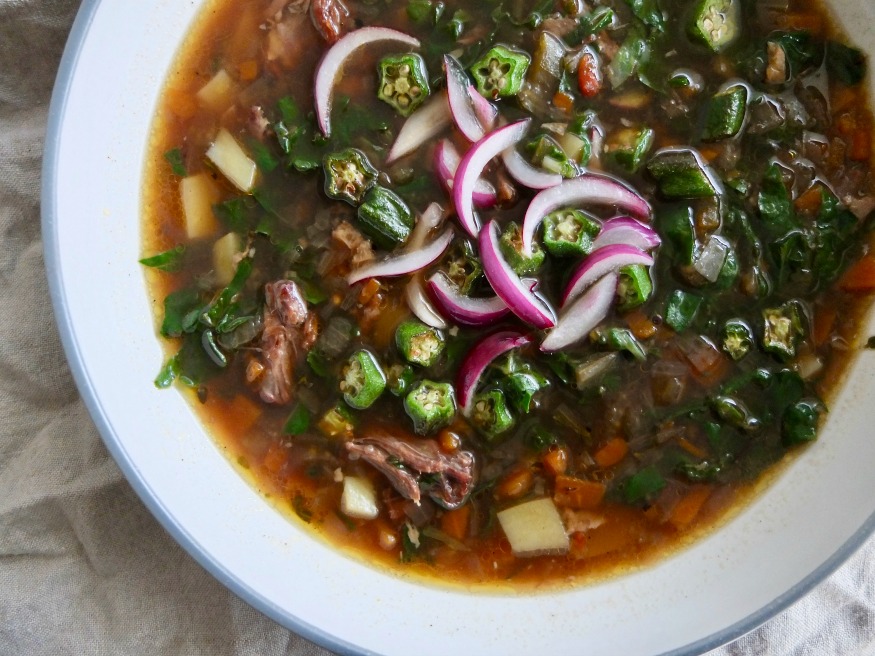 People are laughing at me because I’ve decided I like soup. For years I’ve been very picky about hot bowls of liquid masquerading as meals letting only those involving noodles, wontons or chunky bits into my life. It’s a texture thing; I can’t stand anything that’s devoid of chew or crunch and there’s only so much bread one can justify eating in a single sitting. I say this as a professional-level carb-consumer.

Recently I’ve relaxed the rules a little but still require plenty of vegetables and garnish to keep my soups from the dreaded one-note drab fest. This soup was originally destined to remain a stock but evolved over a couple of days into a rich, meaty number with a warming background heat from the scotch bonnet chillies. People asked for the recipe after watching me make it on Instagram Stories, so here it is.

I quick-pickled some red onions because I thought the soup would want something to cut the richness. It didn’t. The crispy okra is important, however, adding a bright, fresh flavour and of course, another all-important texture. It’s going to be a long winter filled with warming bowlfuls in this house. Yeah I know, you’re all doing it already. Maybe I can tackle another traditionally shunned one-texture food next? Polenta perhaps. Or mashed potato that isn’t 70% butter.

This soup is a bit of a time investment but you will be rewarded. You need to start it the day before you want to eat it as oxtail is very fatty and leaving it overnight in the fridge means you can easily remove the fat which sets on top. I also used a pressure cooker to cook the oxtail which makes the process faster but you could simmer the stew for 3 hours until tender. This makes around 6 servings.

Heat a couple of tablespoons of oil in a frying pan or skillet. Toss the oxtail in seasoned flour and brown it really well in a pan. A lot of fat will come out which you may need to drain off as you fry. Set aside.

Remove all but a tablespoon of the fat from the pan and fry the onion, carrot and celery until soft and starting to colour golden. You want to get them nice and soft as this forms a sweet base for the soup. Add the garlic and fry for a minute or so.

Add the mixture to a pressure cooker along with the beef stock, Guinness, chillies, thyme, ginger and some salt and pepper. Cook for 1 hour and 15 minutes or until the oxtail is very soft. Cool, cover and refrigerate overnight.

The next day, remove from the fridge and take the layer of fat off the top. Pull the meat off the oxtail and add back to the soup. Pick out any pieces you don’t want like thyme stalks and the whole bonnets (you could leave the chillies in if that’s your thing!) then reheat the soup.

Add the diced potatoes. Fry the okra slices in a couple of tablespoons of oil until crisp and drain on kitchen paper. When the potatoes are cooked, add the chard and bring back to the boil. Check seasoning and serve, garnished with the okra.