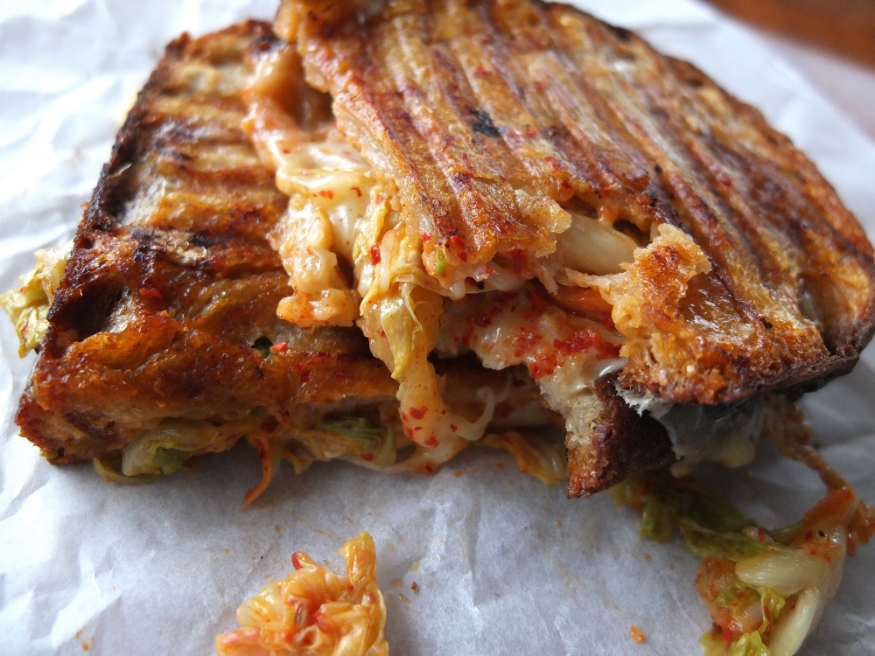 I never thought I’d be posting a squash recipe here, let alone a squash soup. I used to loathe the pappy sweetness of most orange-fleshed gourds, and they’re like pure baby food when whizzed into a soup; I’ve still got teeth. In recent years however I’ve come around to certain preparations of butternut squash, in particular those which steer away from that pumpkin-pie-cinnamon-spice-thanksgiving vibe. Miso does this job very well indeed, its yeasty funk bringing some complexity.

A toasted cheese sandwich is hardly a groundbreaking accompaniment to soup but it is more exciting with the addition of kimchi, especially a really punchy one. I used up the ends of a cheeseboard in the sandwich but it was mostly Lancashire, which has some sharpness. That’s one gnarly end of ageing cheese and a double whack of fermentation before 1pm on a Wednesday. Not bad going. 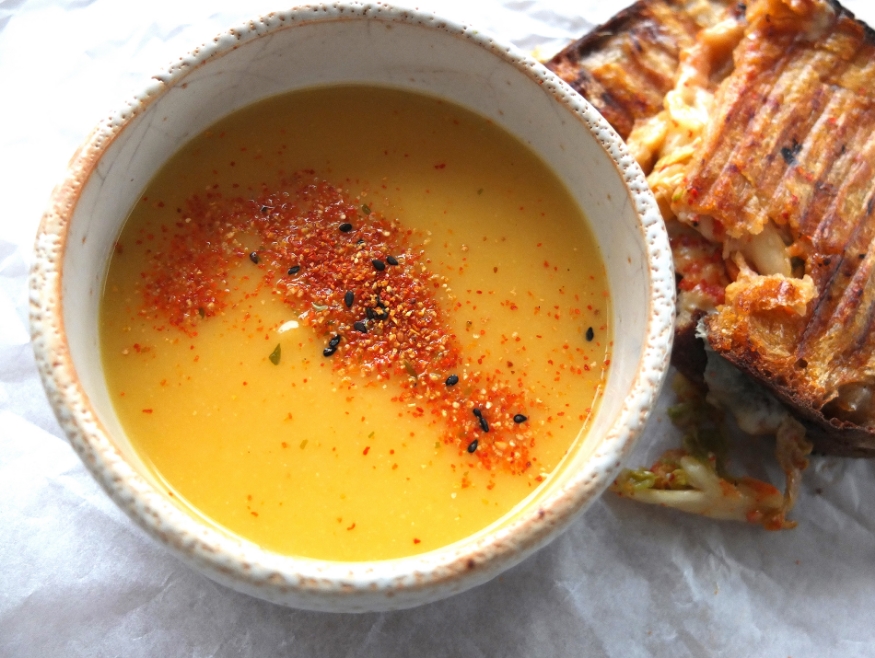 If you do dig the sweetness of squash then you could enhance that in this soup by roasting it first and adding it later.

1 kg butternut squash, peeled, seeds removed and cubed
1 large potato (around 400g), peeled and cubed. You could use sweet potato too.
1 onion, finely chopped
2 large cloves garlic, crushed
1 thumb of ginger, peeled and grated or crushed (I do all mine on a microplane these days)
3-4 tablespoons white miso (or yellow)
1.5 litres good quality vegetable stock
Oil for frying (vegetable or groundnut/peanut)
Shichimi Togarashi (Japanese seven spice) to garnish (optional)

Heat a tablespoon of oil in a large pan (large enough to cook the soup in) and gently cook the onion until soft but not coloured, then add the garlic and ginger and cook for a minute or so, taking care not to burn it. Add the miso and stock and stir until the miso is dissolved. Add the squash and potato and simmer gently until soft. Blend the soup – this is easiest with a stick blender.

Taste and season. Serve topped with a sprinkle of shichimi and the cheese toastie.

Two slices sourdough bread
Kimchi
Cheese (any melter will do here, but you want something with strong flavour, like good Cheddar or Lancashire)
Butter or mayonnaise

Do I really need to tell you how to do this? Okay. You can either butter the outside of your bread or spread it with mayonnaise, both work well (as mayonnaise is really just oil). If you have a toastie machine, as I do, then it’s a case of filling the sandwich and then putting it (butter or mayo-ed side down) into the machine. If you don’t, then fry the sandwich in butter, weighing it down with something heavy, then flipping over and repeating until golden on both sides.