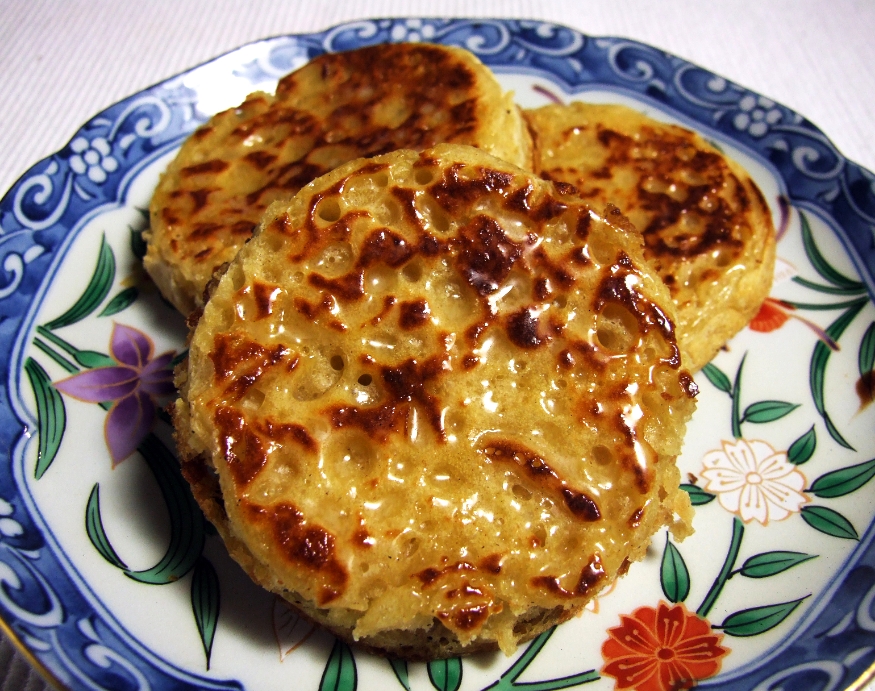 Me and crumpets have got history. My first attempt was a complete failure; the batter was wrong, the cooking was wrong, the finished product was wronger than wrong. I ended up with a pile of stodgy, under cooked discs, which lacked that most distinguishing and important of crumpet features – holes. If they don’t have holes then the butter can’t get in. Enough said.

My second attempt was more promising, mostly down to the good advice of Bea, who suggested I use a different recipe and make a couple of tweaks. The batter this time was spectacularly gaseous and I was effervescent with excitement. The bubbles in the batter rise to the top during cooking and burst, leaving that essential network of butter channels. I thought I’d nailed it. Well, I thought Bea had nailed it.

They did produce some holes – an improvement on the first attempt, but still not good enough. Bea was flummoxed and I was inconsolable until some helpful soul ventured to ask the rather personal question, “how old is your bicarbonate of soda?” I hung my head in shame and squeaked out the admission: “don’t really know; at least two years, probably three, maybe four.”

That was back in July. Despite being certain that this embarrassing discovery marked the end of my crumpet woes, I just couldn’t face making them again until now. The thought of a third failure too traumatic perhaps? Well, it almost happened again; I forgot to put the bicarb in. I honestly couldn’t believe what was happening, but through the mist of disappointment and dizzying fog of frustration I just slung it in half an hour late, re-mixed, re-covered and hoped for the best.

And…it worked. Hallelujah! They were spongy and light, with more holes than an OJ Simpson alibi. Finally, a recipe for crumps that I can rely on, and of course I’ve learned a thing or two about making them along the way. Here it is:

1. Using rings is a right faff. You have to oil them repeatedly (until you can’t be bothered any more) and lift them up using tongs while simultaneously trying to release the crumpet with a knife. Next time I’ll freestyle.

2. Making crumpets takes time. If you try and rush them (by turning up the heat) they will burn on the bottom before they are cooked on top.

3. Keeping bicarbonate of soda for longer than two years is skanky and pointless.

4. I’ve made every single mistake in the book so you don’t have to.

This mix makes about 14 crumpets. Just think, if you remember to put your bicarb in at the right time, your crumps could have even more holes than mine! (Edit: Miss Marmite Lover has made a brilliant suggestion in the comments: she adds more bicarb than the recipe suggests. Obvious now I think about it. This is a brilliant way to get more holes).

Combine the yeast and sugar with 250ml of the warm milk in a bowl. Do make sure the milk is just warm, not hot. Cover and leave in a warm place to rest for about 10 minutes until frothy.

Sift the flour, salt and bicarbonate of soda into another bowl then make a well in the centre and add the yeasty mix along with the rest of the warm milk. Mix this to a thick batter using a wooden spoon. Cover it with cling film and allow to rest in a warm place for about an hour. The film will rise up as gases build up inside. This is good. The result is an extremely light and aerated batter.

Heat a wide pan over a medium heat then turn down fairly low. Use a piece of kitchen paper to wipe vegetable or groundnut oil over the base so it is coated in a nice film. Do the same to your rings if using or you can freestyle (i.e drop blobs of batter into the pan). Allow to cook for about 8 minutes or so or until they appear ‘dry’ on top, then flip them over to toast lightly for a minute on the other side. Remove to a wire rack to cool. Repeat as necessary. They can then be re-heated under a grill to crisp up more before serving. Spread liberally with butter and then rejoice in their holey juiciness.

A huge thank you once again to Bea. Without your advice I may never have lifted myself from the depths of crumpy despair.