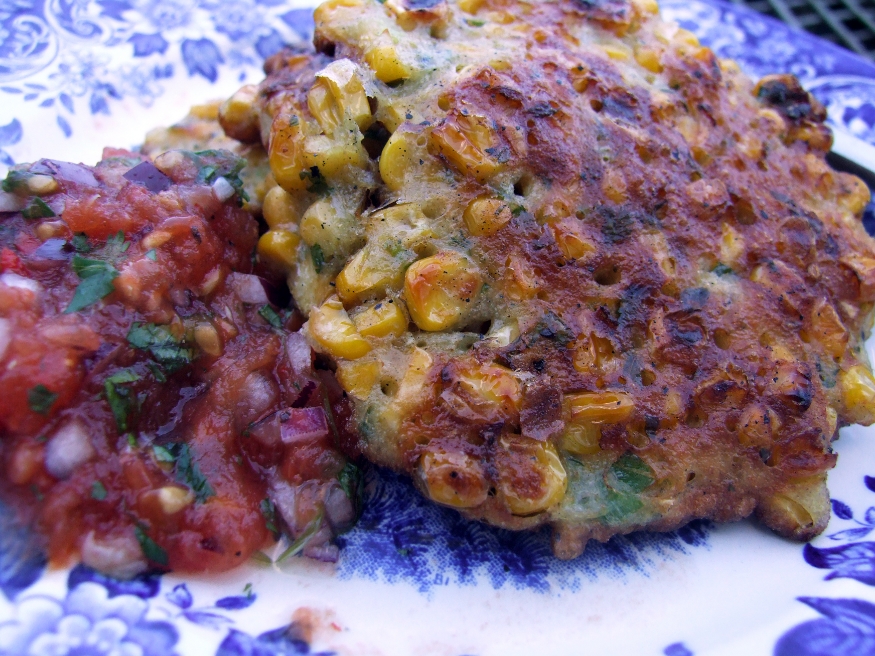 I usually serve these with bacon. It’s sweet n salty amazing. This scotch bonnet salsa is also lovely, but there’s a clear lack of pork in the picture and for that I apologise.

Corn is dirt cheap right now and I constantly hear it begging me to shear it from the cob and fritter the living daylights out of it. The fresh stuff really keeps its succulence but canned and frozen will also work. There are all sorts of things you could add to the mix; Simon suggested cockles, which I’m dying to try. Salt fish is a favourite, if a little more effort. Often though I prefer a simple recipe – a touch of spice, a little spring onion and fresh herbs; it’s all about the corn. Fiona Beckett asked me to contribute a recipe to her student cooking site, Beyond Baked Beans and so this is it. The recipe is easy, fun to make and when served with bacon and perhaps an egg, one of the best hangover cures known to woman. What more could a student want from a meal? If you can stomach it though, there’s no better accompaniment than an ice cold beer.

Vegetable or groundnut oil, for frying

Remove any outer papery husk and strings from the corn cobs then stand one on its end on a chopping board and carefully run your knife down one side to remove the kernels. Repeat this until all the kernels are stripped off and then add them to the batter. Add the egg, spices and spring onion and season with two large pinches each of salt and pepper.

Heat a 1cm depth of oil in a heavy based frying pan or skillet and wait until it starts shimmering, but not smoking. Turn the heat to medium-high. Drop a tablespoon of the batter into the oil at a time and immediately flatten it out into a round fritter shape. It will take a few minutes to turn golden on the underneath – you can then flip it over and brown the other side. Be wary as the oil will spit a little and splash as you turn them. Set aside to drain of excess oil on kitchen paper then keep warm in an oven on its lowest setting while you make the rest. Don’t be tempted to try and put too many in the pan at once.

Serve with bacon. And perhaps egg. Or anything else you fancy.