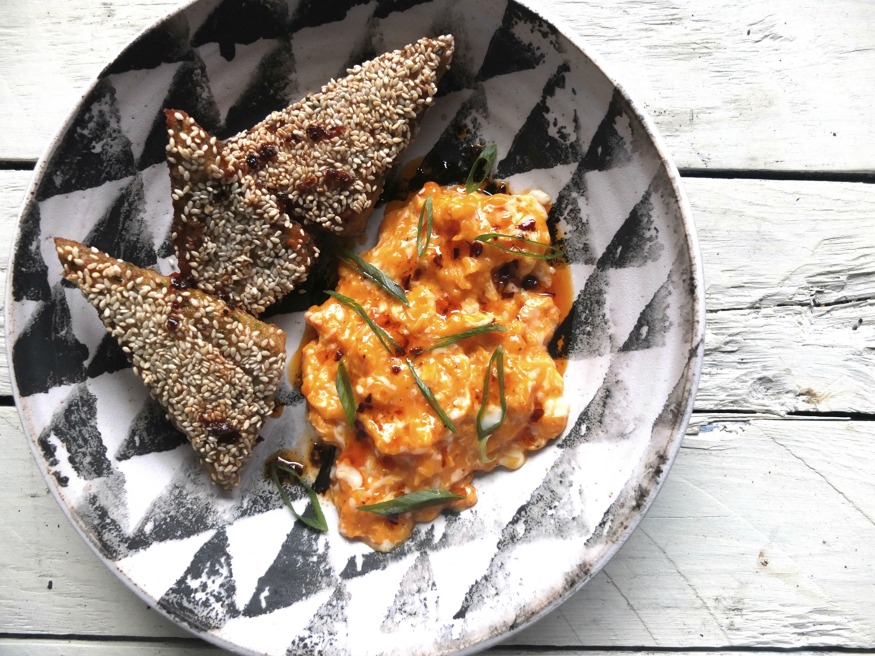 Sometimes I have a conversation with people at the gym, which starts when they say something like, “why don’t you try x diet?” or “why don’t you cut carbs?” or “why don’t you reduce your intake of this?” and all the time I say, “I can’t” and they look at me like I’m making an excuse. It’s very hard to explain what I do, my love of food and the emotional significance of it, to people who are able to eliminate food groups, or drastically reduce calories. I can’t communicate how it goes against the very fibre of my being (literally) to restrict my intake of food in that way.

What I do is about more than describing what I eat, it is about how it makes me feel. It is the comfort of steam rising from a stew plopping gently on the hob, the dumplings warm and heavy on top. It’s about the sticky bun with builder’s tea when you’re frantic about the state of the world, or the slippery flick of buttered spaghetti, eaten in bed, with a hangover. It’s not even just about the joy of fat and carbs either – in January I crave bright, green vegetal things which bring freshness and vitality to a sad sack month. 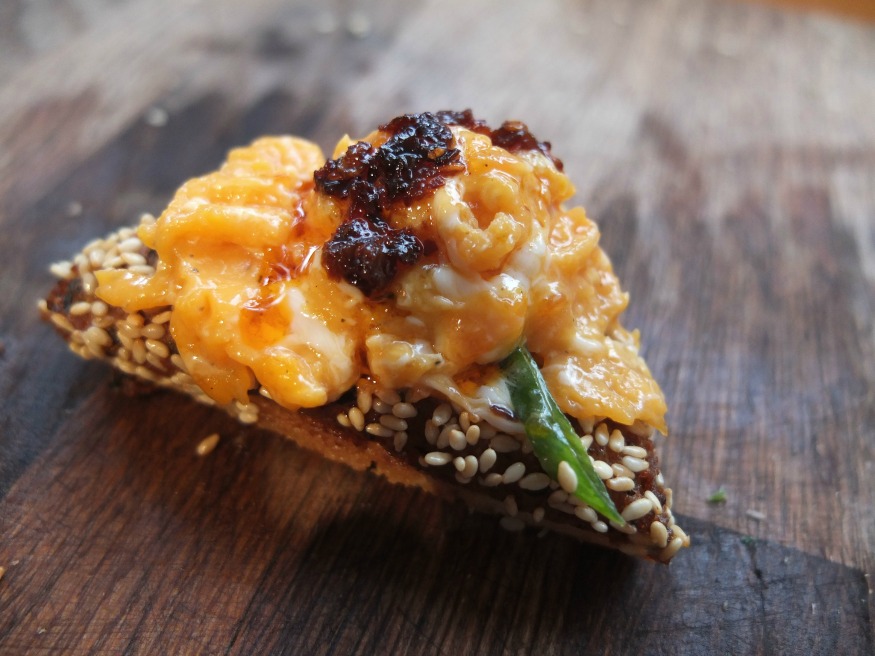 I’ve often heard the phrase ‘don’t be an emotional eater’, meaning don’t comfort or reward yourself with food, and I think, ‘is there any other way?’ What is it like to look at ingredients and see calories instead of flavours? To stab letters into an app that passes judgement on what you’re about to consume, reducing it to numbers? Numbers are the worst. There is the very real problem of obesity, of course, and everything that comes with it, but that is why I bust my ass at the gym five times a week. To see food purely as fuel is such an alien concept.

This is not an anti-clean eating rant, although goodness knows I have plenty of those within me, it’s just an observation now that I’m in contact with people from another world – lovely, intelligent, fun people but with attitudes to food that are light years away from my own. I think of these conversations every time I make something I know they wouldn’t touch with a spiralizer, which brings me nicely onto this recipe for prawn toast. I live with a prawn toast obsessive – never an opportunity missed to order one of those white paper bags from the takeaway, his eager paw rustling in and out until all that’s left is grease spots.

The homemade version is obviously much nicer, and we played with the mixture a bit, ramping up the prawn flavour with some shrimp paste (so good), adding garlic, spring onions and soy. It’s fantastic with scrambled egg for a really OTT brunch, and the chilli oil is crucial for counteracting all that richness. That’s right, guys, extra fat on top.

This makes 4 rounds and so serves 4 people (4 pieces is enough with the eggs).

To make the prawn toast, put everything in a blender except the bread and process to a paste. Heat a frying pan and fry a tiny bit of the mixture to check for seasoning – add salt if you like. To assemble, divide the mixture between four pieces of bread, spreading in a thick layer on top. Cut the crusts off. Divide each into four triangles.

Spread sesame seeds on a plate and use them to coat the top of the toast. I found it easiest to sprinkle these on rather than dunk.

Heat oil to a depth of a couple of cm in a heavy based pan and fry each piece until golden (a couple of mins each side should do it). Set aside on a plate covered with kitchen paper. You could keep them warm in a low oven if you like.

To make the eggs, whisk them in a bowl and season. Melt the butter in a pan and add the eggs, moving them around gently until they are nearly cooked. Take them off the heat before you think they are fully done. Don’t over stir. 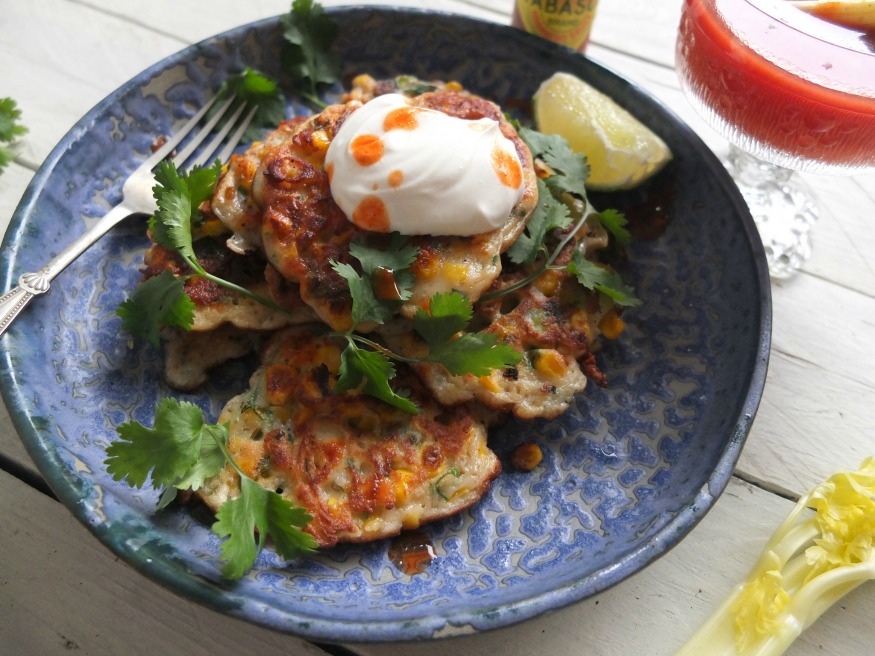 When it comes to hangovers I’m sorry to say that I have many points of reference, not that they get any easier. When once it was possible to giddily make your way out into the world after a night on the tiles, it becomes increasingly difficult to even haul your ass out of bed before midday. The still young adult starts off – dare I say it – almost enjoying a hangover, then progresses through various stages of increasing pain before reaching full-blown knuckle-dragging misery.

I have written before that taming the hangover is like dealing with a ferocious beast – you’d better tread carefully because one wrong move and it’s all over. The hangover is something that needs minute-by-minute management, and although I consider myself an expert everyone is different. I am very fussy about food, for example, to the point where things I usually adore, like eggs, cannot pass my lips post-booze. This is a recent development likely to change at any moment. I also can’t stick tea; so where usually I’m a ten cups a day gal, the morning after it’s just rancid tannic bile. 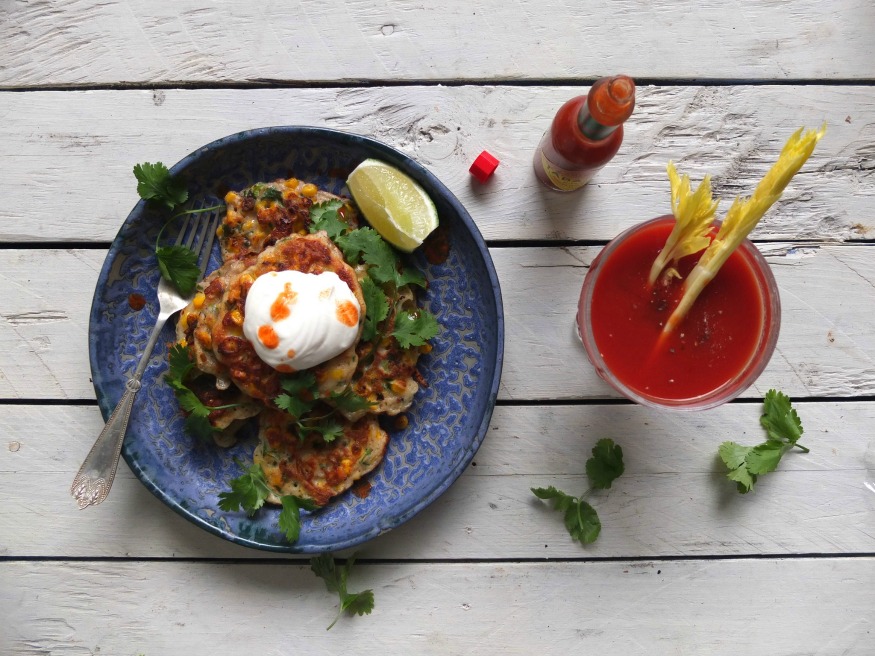 This is a recipe for a level 2-3 hangover (out of 5). I say that because it does require you to stand up in the kitchen, mix things together in a bowl and fry the results in a pan. The fritters are excellent, though, because a) they’re fried b) they’ve got corn and sour cream and c) they’ve got habanero sauce and I think we all know that it’s my absolute favourite chilli. Make these, pile them up and eat them in bed while binge-watching Netflix.

Heat a 1cm depth of oil in a heavy based frying pan or skillet and wait until it starts shimmering, but not smoking. Turn the heat to medium-high. Drop a tablespoon of the batter into the oil at a time and flatten it out into a round fritter shape. It will take a few minutes to turn golden on the underside – you can then flip it over and brown the other side.

Be wary as the oil will spit a little and splash as you turn them. Set aside to drain off excess oil on kitchen paper. To serve, add lime wedges, sour cream and more coriander and Tabasco alongside.

This recipe was commissioned by Tabasco. All content was written and created by me and I retain full editorial control. 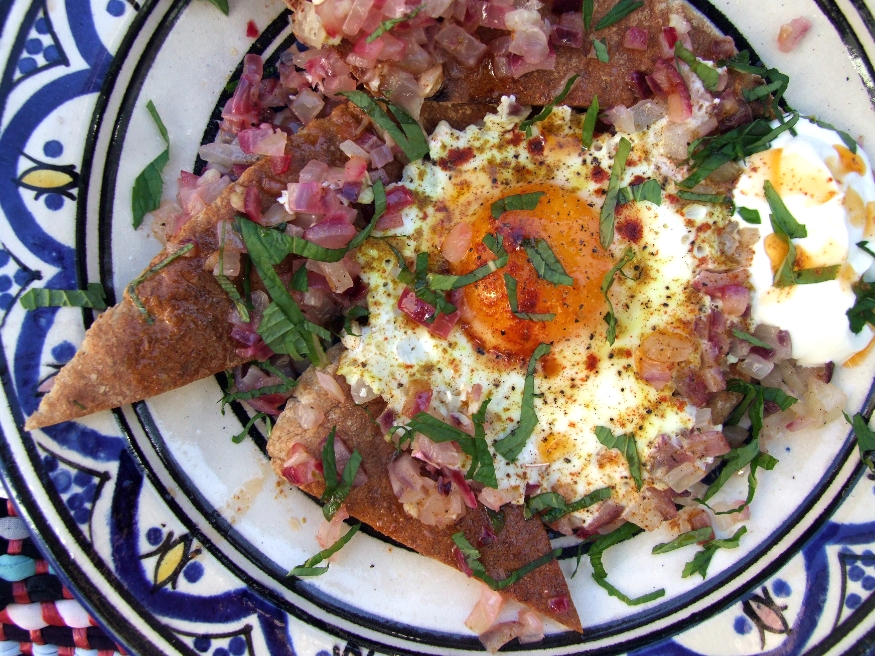 I first came across a recipe for Baghdad eggs in one of my favourite cook books, Jake Tilson’s ‘A Tale of 12 Kitchens’ (from which I also cooked a mummified chicken). Tilson discovered the recipe in the book ‘Medieval Arab Cookery‘, which describes eggs on a bed of spiced celery; my version however is more akin to modern recipes I’ve seen.

An egg is fried gently on a bed of softened onions, sizzled with lemon juice, sprinkled with cumin and paprika then slicked with melted butter. The whole lot is served on top of toasted pitta, which softens in places under the oozy egg. A dollop of yoghurt and a flurry of chopped mint contrast the richness.

This is quite indulgent considering the aforementioned butter, which is why it’s my new favourite Sunday brunch, Middle Eastern style.

Melt a knob of butter in a frying pan and cook the onions gently until they start to soften. Add the garlic and cook for a couple of minutes. Squeeze in the juice of half a lemon, then crack in the eggs.

Dust each egg with a little cumin and paprika (use your fingers to do this and be conservative – you don’t want huge clumps of spice in there), plus some salt and pepper then put a lid on and let cook until the eggs are just set. Toast your pitta breads then split them apart and toast the er, untoasted side under the grill.

In a separate small pan, melt another knob of butter and sprinkle a little extra cumin and paprika into it. Leave this on a low heat to get a little brown and nutty.

When the eggs are cooked, cut up the pitta and arrange on a plate. Put an egg on top, making sure to get plenty of the onions too. Drizzle with some of the extra melted butter and garnish with a dollop of yoghurt and some mint.