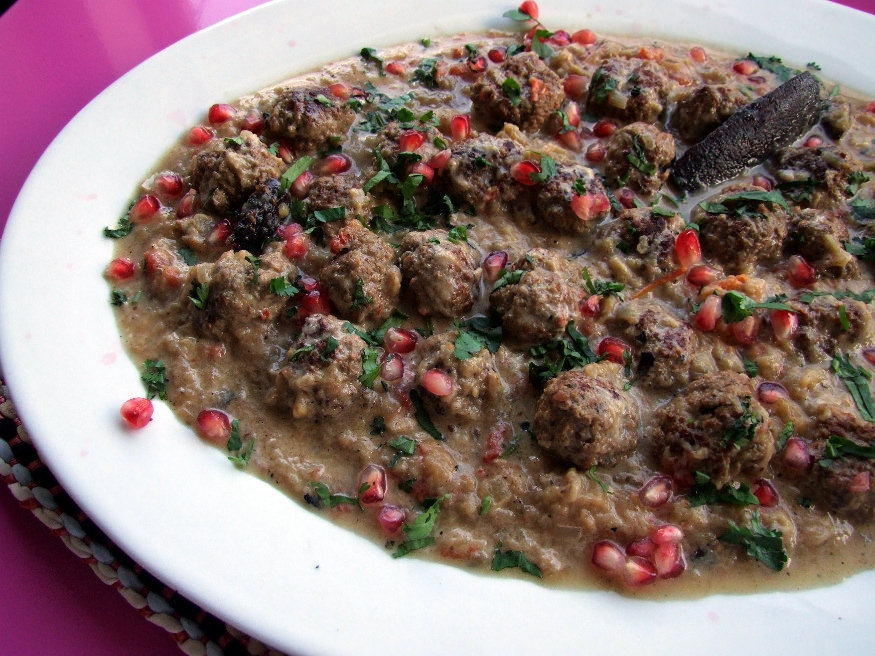 When shiny aubergines are placed over a naked flame, their skins blacken and they collapse inward on themselves with a steamy sigh. Once cooled and split, the inside is gloriously smoky; a total transformation. It is this creamy flesh that blends into dips such as baba ghanoush, but I like to use it as a base for a sauce.

The meatballs are made with lamb, dates and warming spices like cumin and chilli. I’ve nicked a trick from the Italians too and mixed in some breadcrumbs soaked in milk – just a little – so they become light and extremely easy to eat. A swirl of yoghurt and a few pomegranate seeds make this dish pretty. Serve with couscous or bread to absorb the luxurious sauce.

Pierce the aubergines in several places with a fork, then place directly on the gas ring of the hob, turning occasionally, until black and shrivelled all over. Alternatively, grill them to the same effect.

Remove the crusts from the slice of bread and break into rough pieces. Place in a small bowl with enough milk to mash to a paste.

In a small frying pan, toast the cumin and coriander seeds over a low heat, stirring frequently, until they start to smell fragrant. Take care not to burn them. Grind them in a spice grinder or crush them in a pestle and mortar.

In a large bowl combine the minced lamb, bread paste, ground cumin and coriander, chilli flakes, chopped dates and mint. Season with salt and pepper. Mix well; really , really well. Get in there with your hands and knead the mixture almost like a bread dough. Make sure the dates are well distributed. Roll into walnut sized balls. Set aside on a plate.

Heat 2 tablespoons of vegetable oil in the Le Creuset, and fry the meatballs in batches, 4 or 5 at a time, until golden brown all over. Set each batch aside while you cook the next.

To make the sauce, scrape the flesh from inside the aubergines, leaving behind the blackened skin. Chop roughly. Fry the onion until , cardamom pods and cinnamon stick until the onions are soft and beginning to colour. Scrape up the lovely meaty residues from the pan as you do this. Add the aubergines and garlic. Turn up the heat a little and Cook for about five minutes more stirring.

Add the tomatoes, pomegranate molasses and stock. Put lid on and cook for 45 mins to an hour on low heat. Taste and season. For a thicker sauce, remove the lid towards the end of cooking time to reduce it. Add back the meatballs to heat through.

Scatter with pomegranate seeds and coriander to serve.