This article first appeared in The Peckham Peculiar

You’d be forgiven for not knowing that Yada’s Kurdish restaurant exists. In fact it didn’t until very recently, and to find it, you’ll need to walk all the way up the little side street that is home to Ali’s Fresh Fruit, around the corner and into the space of a railway arch.

The restaurant is named after a young man called Yada Baban, although when I arrive it’s his aunt, Pary Baban that I find behind the counter. She is “helping out, just until he finds his feet”, before she returns to her own business, a sandwich shop in Elephant and Castle. For now however, the eponymous Yada is happy to let her take the reigns. Originally from Southern Kurdistan, in Northern Iraq, Pary came to the UK in 1995, after the outbreak of the Iraqi-Kurdish civil war. “When I arrived, the very first thing I did was attending the college to learn the English language! She laughs, “very important! Then I did hairdressing and beauty therapy but I didn’t like it, so with my husband I started a sandwich bar.”

Pary’s brother runs Ali Baba Fruit ‘n Veg (well known to Peckham residents) and he was previously using the Yada’s space to store his produce. It’s not hard to tell that it has been only recently transformed into a restaurant, if I’m honest, but the place has bags of ramshackle charm and despite looking hurriedly put together, is welcoming and cosy, with wall hangings and instruments dotted about. Pary is quick to admit she thinks it needs “a little change around”, but I feel that I immediately want to sit down to eat, and there is plenty to get stuck into. The restaurant serves Kurdish specialities only, and I watch eagerly as Pary piles them up for me to taste.

“We make all the food here, all of it”, she tells me. There are stuffed crispy rice cases called kubba, filled with meat or vegetables, a little like the similar sounding Levantine snack kibbeh (which use bulgur wheat casings). They’re pleasantly crisp, yet chewy with gently spiced filling. As a food writer, I’m excited – it’s always a thrill to encounter something completely unfamiliar. There is a shami kebab, which Pary describes as ‘minced chicken, with spices, and herbs” and a bowl of “signature recipe” hummus, which is, unexpectedly, green. “It’s our own recipe, Pary explains, “we have normal hummus as well, but we make this one as people really, really love kale”. She’s right of course – kale has been a big recent food trend – so no one can say this lady doesn’t have her finger on the pulse. 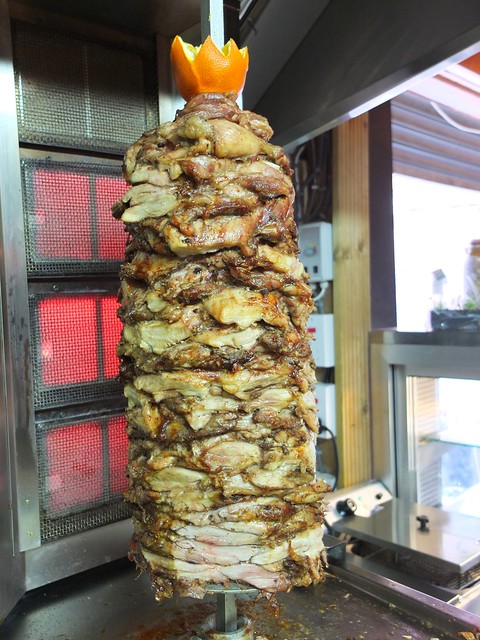 There are chopped salads, too, made with the feathery bunches of fresh herbs lined up along the counter; there’s thick, tart yoghurt with dill; large pots of home made pickles, including mixed pickle and some fierce, skinny green chillies; there are flat, disc-shaped falafel, and dolma made with cabbage leaves, which are “stuffed with aubergine, onion, mixed vegetable, chilli, cumin and sometimes sumac”. There is a mound of coarse bulgur wheat with a very gentle tomato flavour, plus another of fluffy white rice, both of which make perfect accompaniments for all the highly flavoured patties and pickles. In a case alongside I spot giant breads, called kalana, a type of Kurdish flat bread traditionally cooked on a huge, round hot plate. It strikes me that this cuisine is very exciting for vegetarians and Pary confirms, “we have many people now who are vegetarians; Kurdish food has lots of choice {for them}”.

They’ve been open only a few weeks but already business is picking up, “people have been coming, and they love it; they come back again in the evening. We’ve already started taking bookings.” She also reveals that they have plans for expansion, “we are trying to open also a BBQ outside, especially for summer; they will try to do shisha, and we have applied for a license to have a wine bar as well”. You have to admire their resourcefulness in setting the place up for minimal cost; flowers are planted in stacks of tires and the restaurant sign and menu consist of hasty chalk scribbles.

Do you know any other people doing Kurdish food in London? I ask, “we do, but they don’t do just Kurdish food like us. On the Edgware Road they do it, but it is more generally Middle Eastern.” Could it be that I have found one of London’s first exclusively Kurdish restaurants, tucked away down a side street in Peckham? If I have, then I am very happy – the food is great, the people are charming and what luck that it’s right here on our doorstep. 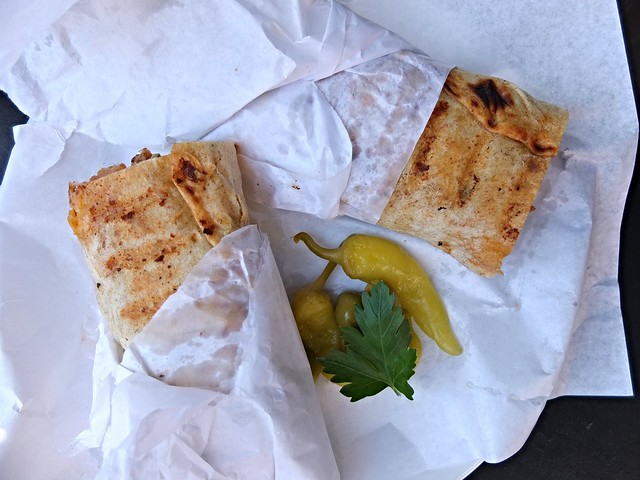 Yada’s Kurdish Restaurant, past Ali’s fresh fruit and veg on Rye Lane, under a railway arch.