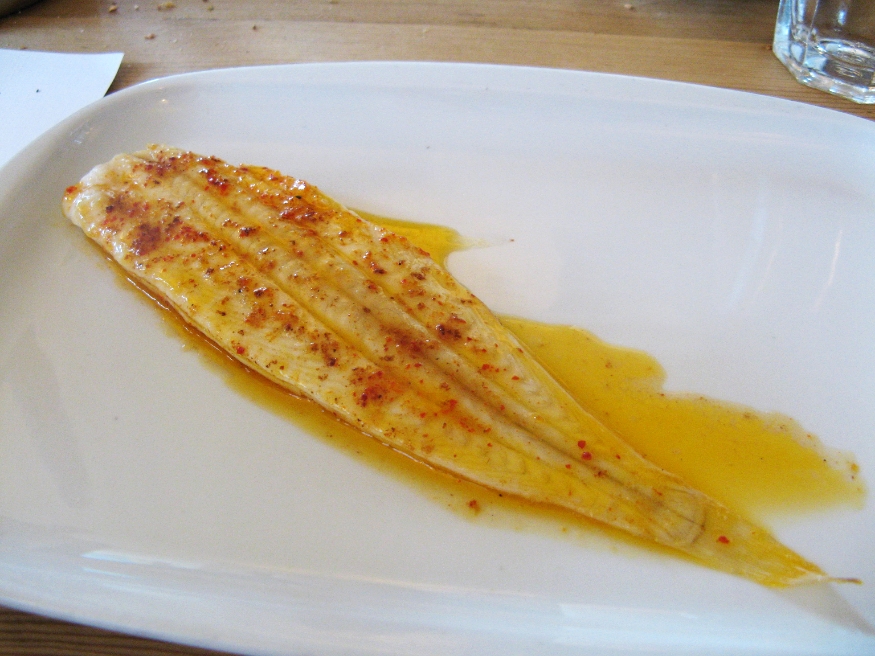 Will you travel for a good meal? I’m sure you can guess that I will. Be it schlepping out to West London for some sushi or planning entire holidays around food, there had better be a decent feed at the end of it or I ain’t going.

I was supposed to visit The Sportsman last year but I’d finished my job a month earlier, was broke and ended up sobbing into my P45 as I saw my friends go off without me. A year later and things are almost back on an even keel. This meal was a present from my friend, to congratulate me on getting a new job – one that I really wanted.

We grabbed a cab from Faversham station, which is necessary, unless you want to drive. I’d heard that the pub was remote, but it took next to no time to arrive, and before we knew it we found ourselves waiting outside for staff to take pity on us – the first customers of the day. We’d pre-booked the tasting menu (you have to) for 9 people and settled in to let them show us the best the area has to offer, for this is what food at The Sportsman is all about. Nothing pleases me more than a menu that starts with a bit of pig. When a pile of warm pork scratchings arrived, my no-drinking rule for the day went right out the window and I ordered a pint of Whitstable Bay as fast as possible. A crunchy piece of swine, a swill of beer. Repeat. Pickled herring pieces were also right up my strasse; firm, glistening meat and an acidity that shooed away any trace of fat from the scratchings. I was prepped for the oysters to come. Two batches of natives followed in quick succession; the first, raw with a pea and ham combination and the second, wrapped with bacon and cooked: angels on horseback. Usually I don’t really dig a cooked oyster but these were the first I’ve ever enjoyed. Probably something to do with the pig.

The bread and butter: outstanding. A focaccia, a perfectly crusted white and the treacly, dark soda loaf which was one of the best breads I’ve ever eaten. I slathered it with their home-made unpasteurised butter and washed it down with a pint of  Shepherd Neame ‘Late Red’ ale at the suggestion of the waitress; “the beer is only available for 3 months at a time” she told me – it was spicy and autumnal, a brilliant match. She’d noticed that I enjoy my beer and made a suggestion which was absolutely spot on. Full marks. A slip sole in local smoked salt and espelette pepper butter was almost perfect. The flesh cooked just so, the seasoned butter oozing amber over the plate. It was the prettiest food I’ve eaten in a very long time and so elegant that it made me sit up straight and pay attention to every last mouthful. The owner and chef, Stephen Harris, enthused about the ‘beautiful seabass’ that had come in that morning. “Huge” he gestured with his hands, “this big.” We were served fillets of the mighty beast with a smoked herring roe sauce which wasn’t much cop in the looks department but tasted of the sea. The bass was a touch over-cooked, which was a shame; I find I rarely eat a perfectly cooked piece of seabass.

Breaded breast of lamb was a nibble, a single slice per person – I wished it was a course. The fatty meat rendered down, crumbed, crisped and served with a sweet mint sauce into which I found myself dunking scraps of stray white bread, pretending they were lamb breast. Other highlights: a pear lollipop with ginger cake-milk, like a pear flavoured mini-milk crossed with a dip-dab minus the sherbert. With me? Okay, well everything should be dipped in cake milk. A creamy froth, like a Jamaica ginger cake milk-shake. I drained the dregs as if I were doing a shot.

Then a sugared plum came with ‘kernel ice cream’ – the plum kernels taste like almonds, and with the booze soaked cake alongside it had the flavours of an autumnal Bakewell tart.

I love what The Sportsman are trying to do. Un-fussed food, as perfectly cooked as possible but with the imagination and sense of fun that is so often missing for me in ‘high-end’ restaurants, or indeed in many restaurants, come to think about it. Some of our party remarked that the kitchen seemed off-kilter; I don’t know, I’ve not been before. What I can say is that I had a very relaxed, delicious and memorable meal – one that was definitely worth travelling for.

The Sportsman tasting menu costs £55 per person, which is extremely good value. To see the rest of my photos from the meal including their own cured ham; a mussel and bacon chowder and a roast rump and shoulder of lamb, go to my Flickr.