Rice and Three and Misogyny in Manchester 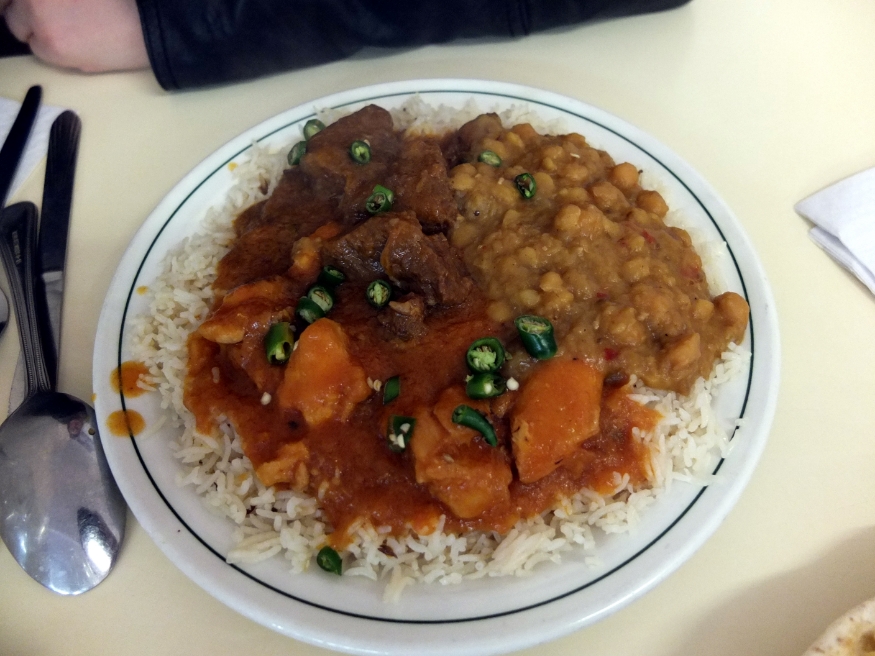 With 24 hours to eat and drink in Manchester, what would you do? Obviously I asked Twitter. The responses were many but amongst the crowd two contenders stood out as the most popular: the tradition of ‘rice and three’ curry cafes and the Almost Famous burger bar.

The curry cafe idea I was very much into and the most popular place seemed to be a joint called ‘This and That’ which is mentioned, well, pretty much everywhere as The Place to Go. The locals seemed to think differently however, which is how we ended up stumbling, extremely (really terribly) hungover, into Kabana. The idea of rice and three is that one is served rice and – guess how many curries? Yeah it’s three. Food is ordered from a very patient man who is clearly adept at dealing with hungover people. He stands over great big silver chafing dishes, waiting patiently while we dither about choosing what we want. Lamb, chicken and chickpea curries were duly heaped onto a mound of fluffy basmati and sprinkled with chopped green chillies, diced ginger and lemon juice, provided on the counter top for self service garnish.

We totter over to a formica topped, screwed-to-the-ground table and tuck in to what turns out to be some fantastic food; simple, yes, but with skilful, distinct spicing and a punch from those garnishes. A garlic chapatti was stupendously good; a real thwack of garlic and a slick of ghee. Hangovers are sniffled away as we shovel it down unceremoniously, surrounded by a mixture of couples with young children, plus people like us, clearly also soothing hangovers, and Indian families scooping up curries with their hands; great food with no fuss and oooh, I haven’t mentioned one of the best bits – it cost…a fiver. A fiver!

And from substance over style to…well I expect you can work out where I’m going. Almost Famous. I’m going to bypass all the trend ticking, the queuing, the forced cliches, because none of that bothers me hugely to be honest. What matters to me is what they’re serving from the kitchen and of course, the bar. Oh and the way they’ve chosen to name the things that are produced in both of them.

Their signature drink for example is something called ‘bitch juice’. We ordered a round. It was possibly the sweetest drink I’ve ever tasted, and that’s from someone who grew up on raspberry Slush Puppies, you know, the scary blue ones. ‘Bitch juice’ consists of a heavy grenadine base, then some booze, presumably, and a topping of fruit and…icing sugar. Mixing grenadine and icing sugar is just…I’d say confident, bold perhaps. Brave, maybe? My teeth are aching at the memory. The fact that it wasn’t nice is not my real problem however. What I really take issue with, is the name, as I did when I ordered my burger with ‘slut sauce’. Sorry but, since when did misogyny = cool? I wondered at the logic behind this. Hey! We’re really edgy! We’re so fucking edgy we named everything after derogatory terms for women! Will the salad come with whore dressing perhaps? How about a slag soup? I think it could really take off. There are a lot of breasts on the wall, too. I like breasts, I have some. They’re very nice to look at but really, when muddled with the lame sexism on the menu it leaves a bad taste in the mouth. As does the food. My burger, as you can see, was overcooked and also under seasoned. The house sauce appeared to be a mixture of mayonnaise and mustard but somehow, tasted of nothing much at all. It was reminiscent of a ropey Whopper. The wings I need not describe. Take a look at that picture. You know exactly what that BBQ sauce tastes like without my even needing tell you. 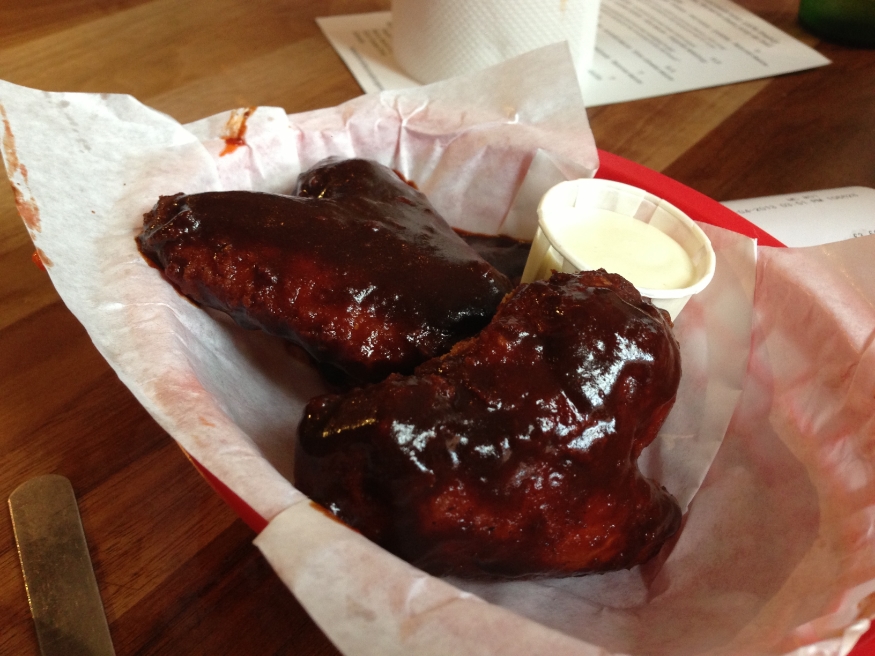 As I’m queuing up to order food I notice they’ve copied out Charlie Sheen’s breakdown rant on the wall. Er, cool. All the pictures are at jaunty angles. I want to buy them a spirit level. They sport a manifesto that says ‘no bloggers’, ‘no photos’. I wonder how they police that? There is a free jukebox at least, but they’ve allowed a situation where it is actually possible to put ColdPlay on, and lo and behold, someone has. And they’re singing along.

I’ve seen people draw comparison with London’s Meat Liquor, but let me tell you, Almost Famous has absolutely nothing on it. Meat Liquor has a history, which began with Meateasy and grew organically. The food is also a million times better, which is, let us not forget, what a restaurant is actually all about! Radical!

If you have to try very hard to be edgy and cool then I’m sorry to break it to you, but you aren’t. Kabana illustrate my point for me rather nicely. A slightly scruffy little cafe, no airs or graces, quietly doing their thing. Having just said the food is of utmost importance I’ll now admit that there is a place for restaurants which make their name on atmosphere alone and there’s nothing really wrong with that, I suppose. Just don’t be so goddamn desperate.

We also visited a couple of good pubs worth mentioning, if you’re interested. Very different places. Port Street Beer House is a craft beer pub of the well, craft beer pub ilk and The Castle is the kind of pub that I like. It’s sort of dingy and smells a bit and everyone talks to each other. Take yer pick.