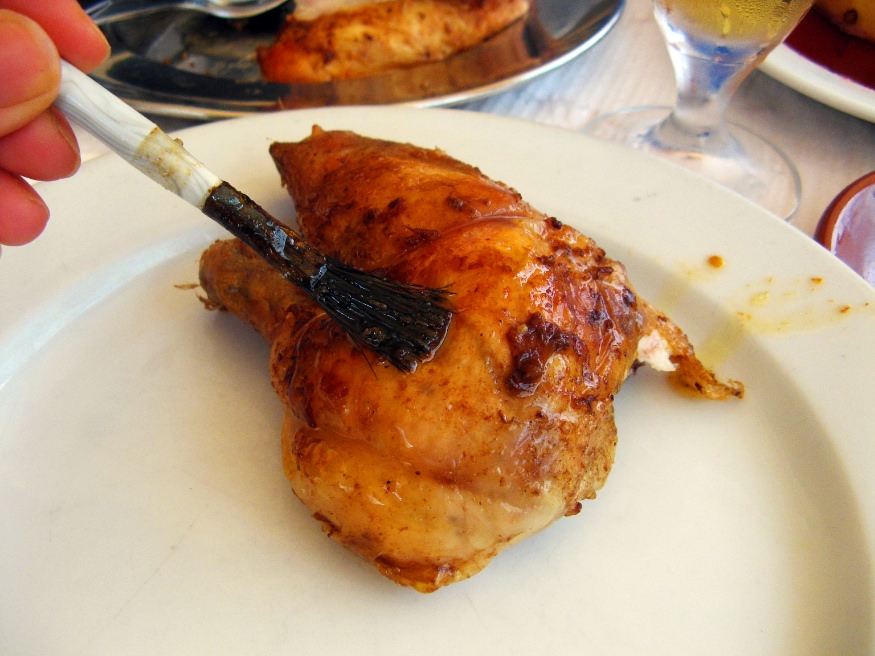 I’ve just been to Portugal for The European Wine Bloggers Conference. Obviously this is a food blog, but I’ve been making an effort in recent months to really get stuck into the rather daunting task of learning more about wine. I drink enough of the stuff, yet always seem to have a problem retaining information about it; this must change.

That said then, I’m not actually going to write about the wine in this post, as I need some time to consolidate, assimilate and generally gather up my thoughts on a topic I’ve never been confident in writing about. The post will need some careful consideration. In the meantime, a review which skips off my fingertips with minimum effort: Bonjardim restaurant not far from Rossio square. We’d received a recommendation from Bibendum’s Willie Lebus who raved about their spit-roast chicken, and so we wasted no time in heading there on our first night and ordering a big pile of chook, chips and salad.

At most restaurants in Lisbon, the waiter brings a selection of nibbles such as ham, cheese and pâté to your table before you place your order. If you eat them however, you will be charged. Fortunately for us, the charming waiter in Bonjardim informed us of this; bonus points for that. We no doubt ordered a round of Super Bock: a refreshing, ice-cold lager which can be found everywhere in Lisbon, or was certainly to be found everywhere that we went, and was permanently attached to our hands (a person can get wined out you know). It was light, fizzy and went down like a dream. Bish Bash Bock.

The mountain of chicken arrived on a silver platter and the feeding frenzy ensued, with myself and my mate polishing off two quarters each and then splitting a third. It comes with a dinky little pot of piri-piri sauce which seemed to consist of chilli flakes, oil and salt as far as I could tell and was highly addictive. You dunk the brush into the pot, swirling to get a good dose of those spicy flakes and then brush onto your bird as desired. A few stray hairs from a well-used brush were picked off and then it was nothing but me, my face and chicken; we probably should have got a room. The skin was golden and crisp with just the right amount of soft fat remaining beneath, like eating really good crackling. The flesh was super juicy within. I suspect they turn over tables very quickly because the chicken was so moist; it had clearly not been hanging around for long. A well dressed salad offered some freshness and went some way to giving the impression of eating healthy stuff. The whole lot, including wine, came to around 15 euros each and we left with full bellies, high spirits and huge enthusiasm for a crawl of the famous Ginjinhas: shops which specialise in smooth and sweet cherry brandy served in little shot sized paper cups with booze steeped cherries lurking in the bottom, if you’re lucky.

Three days later, feeling delicate to say the least, my mate and I returned to Bonjardim to gorge ourselves once more. What better hangover cure than spicy chicken and lots of it, followed by a final mopping up of juices and a dunking of bread in the piri-piri pot. We washed it all down with copious amounts of Bock, naturally. Service was charming and sweet, our waiter waving us a cheery goodbye when he left at the end of his shift. We were still settled firmly in our seats, well on the way to our next hangover, which may have had something to do with the scale of our beers in the bar afterwards (see below); my puny wrist strained to lift the glass.

Bonjardim is a little gem, tucked away in the side streets of Lisbon among a lot of other restaurants which all look pretty much the same. I can’t comment on the rest of their menu, but I can advise you to order chicken and chips, lick your lips and eat, drink and be merry. Bonjardim does simple, unpretentious food in the rather shabby and sometimes dilapidated, yet always charming and pretty back streets of Lisbon; you’d be a fool not to pay it a visit.