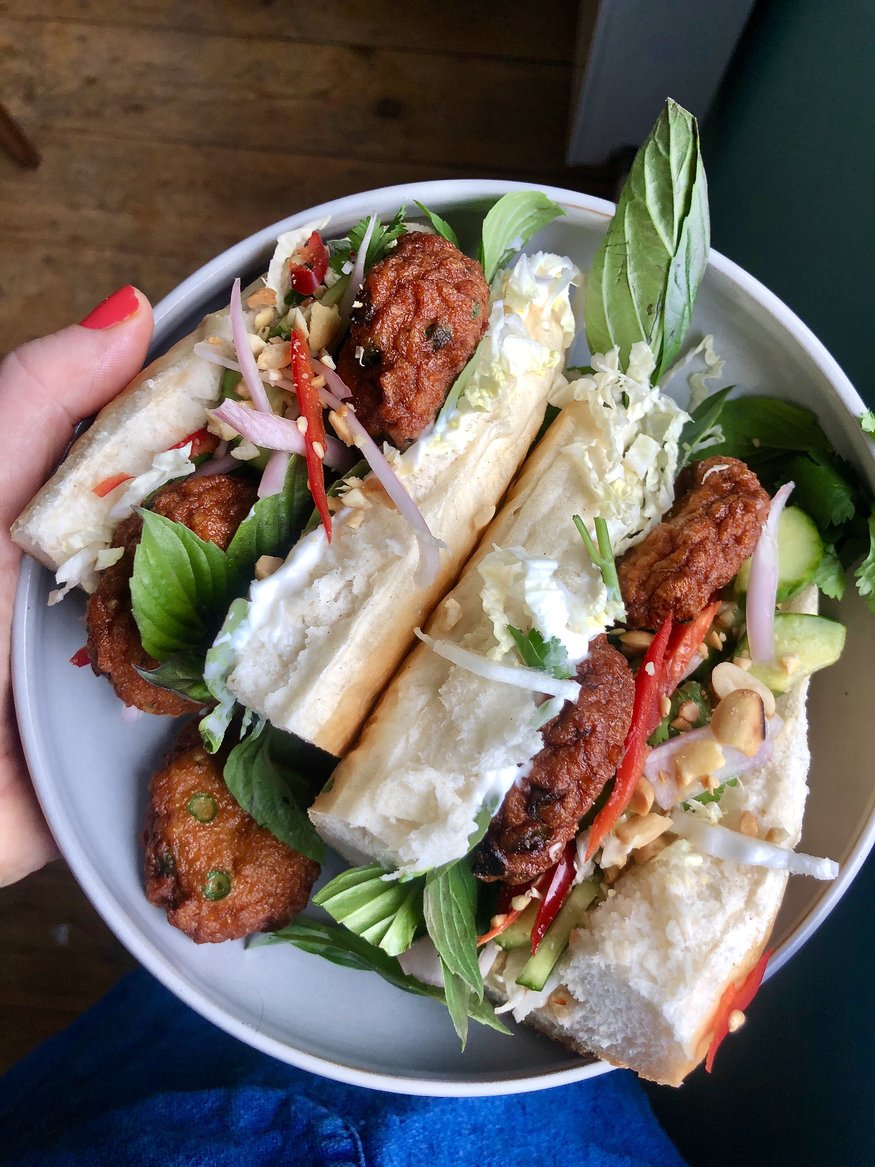 I’ve just returned from a work trip to Cambodia – a tough job but someone had to do it etc. My piece will be published in Food & Travel magazine later this year so I’m just here to tell you about Cambodian sandwiches, or num pang. As you might expect, num pang is very similar to the Vietnamese banh mi although considerably less well-known. Which came first? Well, they probably developed around the same time since both countries were part of French Indochina, formed in Cambodia and Vietnam in 1887.

Is there anything more thrilling than trying unfamiliar street food for the first time? Eating at tiny, meticulously organised stalls in South East Asia in particular – Malaysia, Thailand and Vietnam mainly – has left me wide-eyed and splattered with oil, sauce and crumb on many memorable occasions.

In Cambodia, the heat forces people to eat little and often, and street food lends itself well to this rhythm. A num pang, prepared in minutes on super light, crisp-crusted baguette, slicked with chilli sauce and stuffed with a pleasantly rubbery meatloaf called pate is the perfect snack. The pickled vegetables, although similar to banh mi in that they’re usually carrot and daikon are cut much thinner, therefore losing their crunch; I can’t say I was really that into them. For this recipe then, I’ve made a cucumber and shallot pickle which adds the requisite sweet and sourness while also bringing plenty of texture.

I’ll share a more traditional recipe in the next week or so but I’ve had these seafood cakes on the brain and had to get them out of my system. They’re based on the bouncy fish or prawn cakes found all over East and South East Asia but I’ve added some crab to mine because: crab. The bounciness of these cakes usually comes from pounding or blending raw fish but since I was using 50/50 raw prawns and cooked crab I also added an egg white to be on the safe side. I’d say the texture is somewhere between springy and soft, which is pretty ideal for a sandwich situation.

They’re flavoured with kroeung, a yellow (and sometimes red or green) aromatic paste made with turmeric, galangal and lime leaves (you should think twice about calling them Kaffir lime leaves, here’s why) among other things. It’s used as the base of many dishes and if you want a taste of Cambodia then this is the place to start. Usually, it would contain a fermented fish paste called prahok but since we don’t have that here I used some dried shrimp paste and fish sauce.

I can’t wait to tell the full story of my time in Cambodia, a fascinating and historically very troubled country. You’ll have to wait until the article comes out to read that one I’m afraid. In the meantime, clear a couple of hours and give this sandwich a try. Too much time to spend making a sandwich I hear you say? Sorry, you must be new around here.

For the crab cakes

150g raw prawns (they need to be raw)
100g white crab meat 70g brown meat (I bought a dressed crab for this so the amounts will vary if you do the same)
1 large egg white
50g green beans, thinly sliced
2 generous tablespoons kroeung
Veg or groundnut oil, for deep frying

Make the kroeung paste by toasting the shrimp paste in a dry pan over medium heat until dark on all sides (I recommend opening a window as the smell is strong). Crush it to a powder in a pestle and mortar.

Add 2 tablespoons of vegetable or groundnut oil over medium heat, then add everything except the shrimp paste and fish sauce. Cook, stirring until ingredients are just beginning to brown, around 8 minutes. Add the shrimp powder and cook for a further minute or so.

Add everything to a blender with the fish sauce and process to a coarse paste. Store it in a jar in the fridge with a layer of oil on top to prevent it spoiling.

To make the crab cakes, combine the prawns, crab, egg white and kroeung paste in a blender and process until very sticky. This took 5 minutes in my Vitamix but could take longer in a less powerful blender. Stir through the beans.

Form golf ball sized cakes with wet hands, then flatten into round patties and place on greaseproof paper.

Heat oil to 180C and fry the cakes in batches of 3 or 4 for around 30-secs to 1 minute each side, or until golden and cooked through. Drain on kitchen paper.

To assemble the sandwiches, spread one side of the baguettes with mayo, the other with sweet chilli sauce. Top with cabbage, then add the herbs, crab cakes, cucumber relish, red chilli and toasted peanuts. ENJOY! A cold beer works well as an accompaniment.