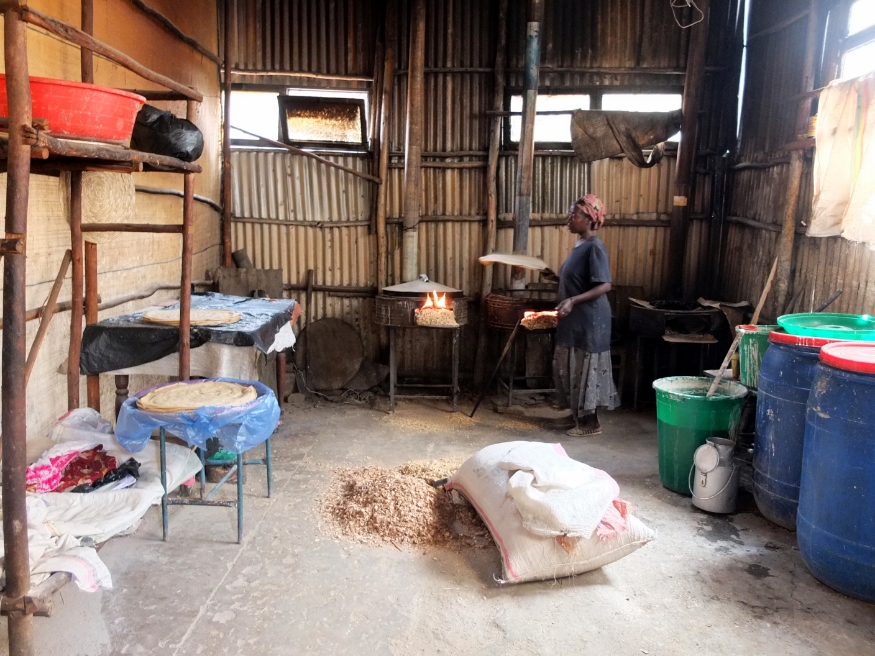 Today I spent time with a group of women who have received support from World Vision to set up their own injera making business. All of the women were identified as particularly in need of help, living below the poverty line for various reasons. Some are HIV positive and were previously uneducated about living with it or were unaware they even had it, while some were unable to earn a living for other reasons, such as being dependent on a husband who died. Lemlem Tesjay (above) is effectively the manager of the injera group, of which there are about half a dozen members. Aside from earning the women enough money to do things like cover the expenses of their children going off to university and of course, a salary for themselves, they have the benefit of companionship; they are friends and can discuss family issues, financial issues, womens’ issues, together every day. They also have the benefit of a work space which they rent from the government – this would not have been available to a single person.

A member of the group, Letay Naezgi, took us through the entire process of injera making. She was stuggling to make ends meet after her husband died, travelling out of Addis Ababa to buy goods which she then attempted to sell for a higher price in the capital. It simply wasn’t enough. Now she is able to take a regular salary each month, make sure her children are well nourished, and was even able to pay for herself to visit relatives in the North of the country.

Injera is made from teff, a grain which grows in Ethiopia. The women take it to the local mill where it is ground to a powder. The teff is sifted 3 times This then goes into the bucket to ferment for 3 days After this time, water is boiled and combined with some of the teff mixture from the bucket. It is heated again until boiling, then cooked for 5 minutes. It’s now ready to become injera. Fuel for the injera pans

The injera are cooked on massive, floor standing hot plates, which are sprinkled with ‘something like cabbage seed’ – this looked a bit like polenta and I’m sure is used for the same purpose as the latter serves when sprinkled under pizza dough. Once on the plate, they’re covered with a giant hat and cooked for about 10 minutes before being shimmied onto a sort of flat basket and transported over to a different work top to cool. Letay of course makes the injera cooking look incredibly easy; they produce a minimum of 100 a day, but can produce up to 500, depending on orders. They ask if I want to have a go, which of course, I do. My injera and those of my fellow novices spark fits of giggles amongst the women. They’re all sort of thick, wonky and craggy rather than thin and even as they should be. ‘YOURS HAS A FACE!’ I helpfully inform Jo. With our ‘finished’ injera

They might not be much to look at but we’re rather proud nonetheless. They still taste like injera and we gobble them up with a mound of chilli powder for dipping. The World Vision development program here has been of such vital importance to these women. When once they could barely afford to survive, now they’re self sufficient and supporting their families. The benefits are not purely financial however. The women who are HIV positive have received education in living with the virus. They have received small business training. Importantly though, there’s a sense of empowerment. We ask Lemlem how she has changed since her involvement in the project and she describes how she tells people, ‘anyone who is strong enough to work has the power to change their lives’ – she particularly wants other women and their children to know this. I decide to ask her how the men in Ethiopia feel about women becoming more empowered and she smiles and answers that although they are aware this is now ‘a thing’, some of them choose not to really acknowledge it. Times are gradually moving on. This is such a powerful collaboration, and it starts me thinking about the power of people working together for change, the essence of the Enough Food For Everyone IF campaign that I’m here to highlight. What could we do to help change our approach to food and make it less wasteful? More sustainable? How about sharing an allotment or garden with friends or neighbours? Perhaps your mates don’t have the time to maintain that garden all by themselves, but would like to see it used more effectively. Or how about office lunching? A group of colleagues clubbing together with one person bringing a simple lunch for everyone each day, instead of feeding money into the hands of big companies with questionable sourcing of ingredients, not to mention interesting approaches to paying tax.

The idea of this campaign is not not make everyone feel guilty, but to address the root of the problem, which lies in the way food is grown and distributed. If we can all make a small change at a local level, the knock on effects could be very powerful indeed.