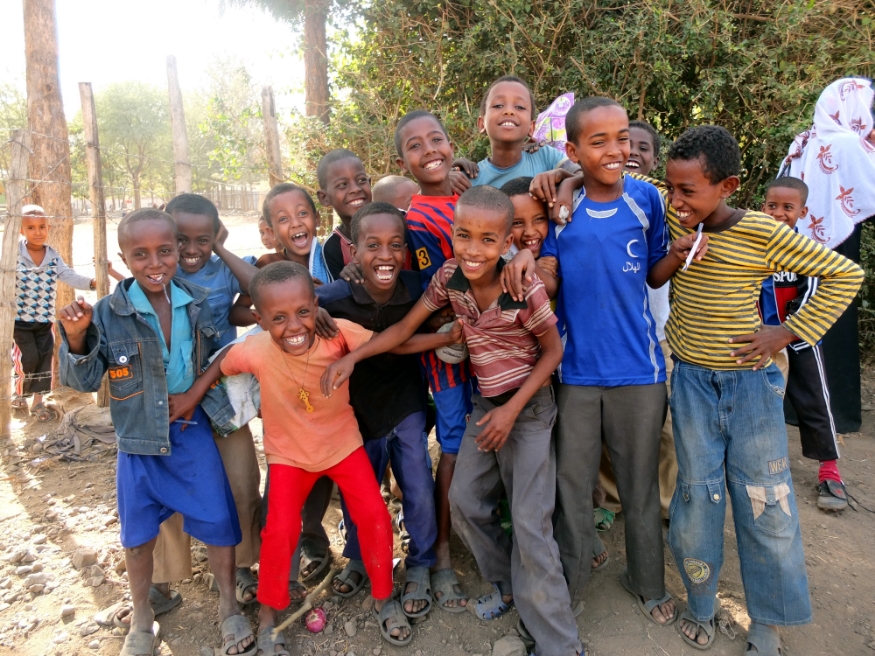 It was 1984 when news of the famines in Ethiopia broke in the UK; I was 4 years old. Antsokia valley was one of the worst affected areas, and I’ve been there for the past 3 days, visiting people who lived through it, and learning about how the area has changed and learned to support itself, with the help of the aid organization World Vision.

Four million people were affected by the famine, and there were 15-20 deaths each day. I met the man who informed the government of the situation at the time, Girma Wondafrash. A community leader, he told the authorities that people were starving, initiating the relief effort. He spoke about how he mobilised a community to build an airport in Antsokia, overnight, in order for emergency aid to be delivered. A remarkable story. I think about Live Aid and Bob Geldof and all those images of desperate people on the telly, as I’m hearing the story from the man who actually started the whole thing, sat right in front of me. We’ve been travelling out to World Vision’s ‘area development programmes’, along dusty roads where women and children walk, carrying water, bags of onions and sugar cane; men herd cattle or tug lines of camels bearing wood or straw, scarves piled on their heads to shield the sun. Donkeys plod relentlessly with burdens of rocks. The landscape changed as we arrived here from Addis Ababa; what were once patchwork shades of brown change to green as crops flourish. Red onions are a major source of income, a variety called ‘Bombay’ which can be harvested 3 times a year; some are exported but most are consumed by Ethiopians. The fields in which they grow are now irrigated, and we walk along irrigation streams to a fruit farm. I find out just how effective the system is by plunging my foot into a puddle of sloppy mud. World Vision’s development programs run in 3 phases: the emergency relief phase, which is what we saw with emergency feeding programmes during the famine, rehabilitation, and then development. After the emergency feeding ended, the Ethiopian land and its people were in such dire need that a lot of work had to be done in preparation before rehabilitation could even start. The people didn’t know the capacity of the land; where previously they’d been growing simple grains, now they grow vegetables and fruits – avocados, mango, papayas, bananas, oranges and limes. Bananas on the tree with magnificent flower. At another farm we meet a man called Abebe Aragaw who survived the famine and now runs a flourishing fruit business. Trees groan with the weight of huge papayas and mangoes, the latter being a good example of how the seedlings have been modified in research centres to ensure better rewards for the farmers; the new trees yield much more fruit, more often. At another farm we see modified trees that are smaller, meaning women are able to harvest the mangoes. This seedling development is clearly a major boost for the farmers. Abebe on his farm. Ethiopians are smart dressers; clothes may be threadbare, but they still turn out in suits. Abebe with his lunch box, made from animal hide. Desta Aragaw, a member of a farmers’ association, on his farm in Antsokia Valley. Ripe apple mangoes on the tree.

We also see fresh coffee beans; coffee is one of Ethiopia’s major exports and is crucial to the economy. Aside from that, it’s incredibly good. I’m a hardcore tea drinker, and yet I’ve stuffed several pouches of coffee in my rucksack to bring home. Abebe shows us around his farm with pride, and describes how he has plans for the next ten years, including setting up his own shop. Every Ethiopian we meet seems to have a clear goal for the future, not a single person faltering at the question. They have developed strength and self sufficiency and the will to keep moving forward is strong. The lush farms, buzzing with insects and bird song, seem so far away from the images of planes dropping emergency rations on parched soil. It’s hard to believe it ever really happened.