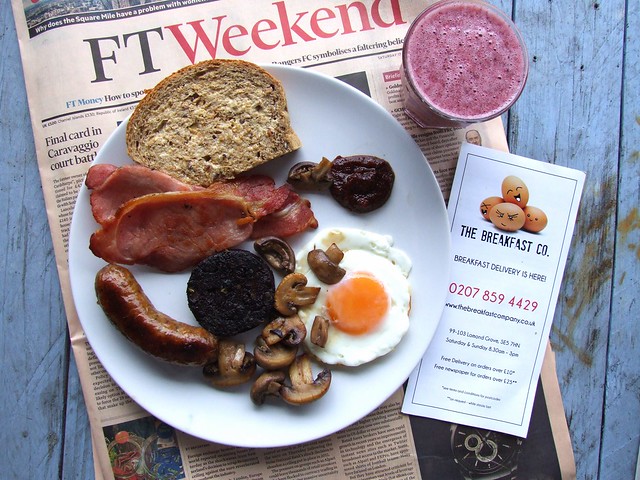 People of South East London, listen up (particularly those likely to wake up with a hangover come the weekend). Do you know that you can get breakfast delivered to your actual (actual) doorstep on Saturday and Sunday mornings? Seriously. The Breakfast Company will do this. The idea came from the brain of a bloke called Niki Byrne, for the reason you might imagine – he was feeling rough one morning and wanted someone to bring him a fry up. He got together with his best mate and brother and made it happen and they now cover much more of South East London and some of South West, although I can only vouch for the service in Peckham and Camberwell, where I am close to their kitchen.

My though, what a service it is. I’ve tried quite a few of the dishes they offer now, and the quality is high. This morning for example, I enjoyed a full English, including sausage, bacon, mushroom, bubble, black pudding and a fried egg that was STILL RUNNY. It came with a tamarind-heavy pot of home made brown sauce and a mixed berry smoothie that was actually lovely instead of tasting either entirely of banana or like someone has blitzed a bag of Iceland frozen forest fruits.

They do sort of homage to ackee and salt fish but with scrambled eggs and mackerel, which comes with plaintain and – wait for it – they actually know how to cook the plantain properly. So many people don’t which is why it is often disgusting. Plantains are very sweet and they need to be cooked with some acidity, in which case they become delicious.

I’ve also tried the huevos rancheros, which arrive with some impossibly tasty chorizo sausages (though the guac needs work), and also a bacon, egg, cheese and hash brown muffin. A grumble: they haven’t worked out how to keep the egg runny in the muffin yet, but tell me they are working on it. 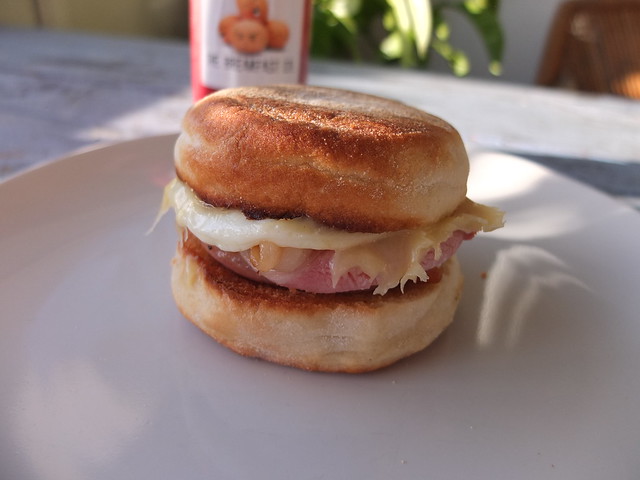 What’s surprising about The Breakfast Company is the quality of the food; so many people could come up with this concept and then make a half-arsed attempt, but it’s easy to see they really care about it. Most ingredients are sourced locally or made made in house. They’re also very intensely cheery when they come to the door.  Oh and they’ll pick up a paper for you on the way.

One word of advice though guys, you gotta change that website. There’s just a space to write out your order rather than tick box options, which means that every time you inevitably forget what you want, have to go back to the menu, at which point your entire order is lost and you have to start again. Still, that’s easy to solve with a bit of tinkering (read: paying someone to sort it out) and it’s a small price for what will surely be the saviour of many a person too busy piecing together the events of the night previous to even begin thinking about how they can feed themselves. Me? I’m just a lazy cow who likes having breakfast delivered to my door, and I don’t see anything wrong with that.