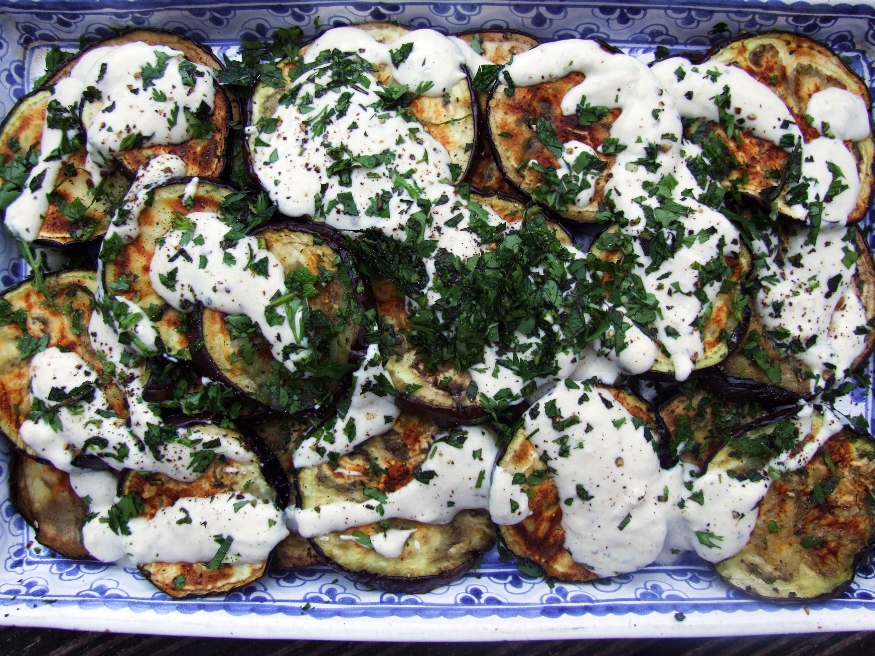 Nearing the end of  The Big Lunch* cook-off, we found ourselves flagging; we’d been cooking for 10 hours straight, only pausing to open the odd beer. There were plans for an aubergine galette and I’d toyed with the idea of baba ganoush but when it came down to it, a super quick and simple recipe was needed. I’d made this a few weeks earlier; the cool, sesame-laced yoghurt lifts the meaty aubergine into salad territory – perfect for a hot summer’s day.

It disappeared quickly at the lunch, with one guest declaring it “one of the best pieces of aubergine” he’s ever eaten. It’s the kind of dish you bust out at a BBQ; minimal effort, looks pretty and much more interesting than your average salad. You could even grill the slices on the BBQ first for extra smoky flavour.

Begin my brushing the aubergine slices with oil and seasoning lightly with salt and pepper. Either grill them for 5-10 minutes each side under a hot grill or do the same on a BBQ – they should be golden brown and slightly shrivelled.

While this is happening, mix the yoghurt, tahini, garlic, lemon juice and herbs (reserving a few herbs for garnish) together in a bowl. Season with salt and pepper and adjust any of the ingredients as you see fit (you may like more tahini for example). If you feel the dressing is too sour, I find a pinch of sugar never hurts. Don’t feel guilty.

When the aubergines are ready, arrange them on a plate and drizzle over some of the yoghurt sauce. Scatter with more herbs and add an extra drizzle of olive oil if you fancy it.

* The donations have continued to trickle in and so in addition to the £200 odd raised on the day, there’s another £115 plus Gift Aid on the Just Giving Page. Thanks so much to everyone who donated.