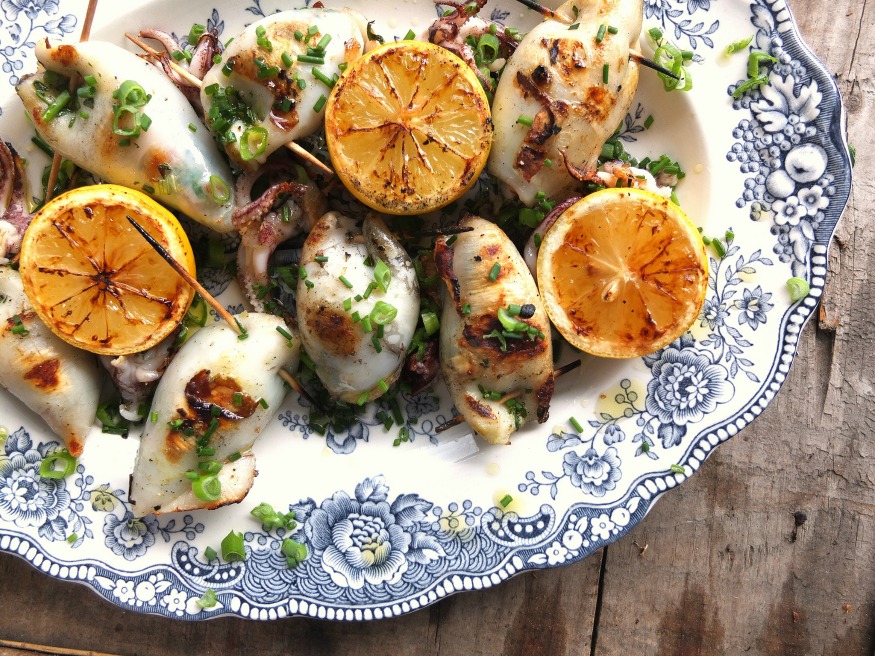 The idea when cooking this dish is to channel a mahogany-skinned Greek, expertly tending the BBQ on the white-painted terrace of his island home, overlooking the glittering turquoise Aegean. 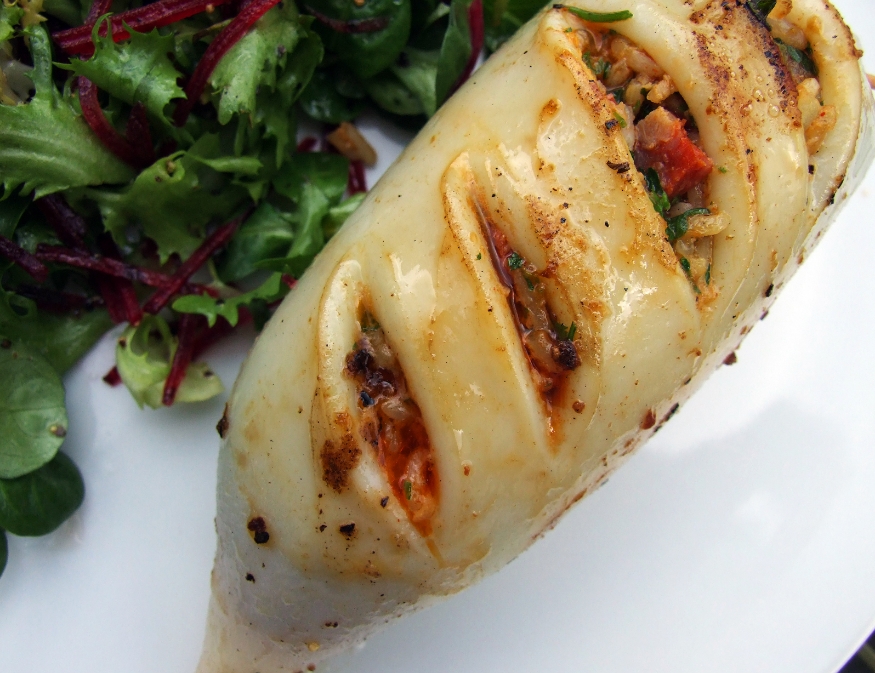 As much as I enjoy the odd winter BBQ, the novelty is starting to wear off. I want to feel the sun beating down on my back and the fierce heat of the grill on my face, knowing that within arms reach is the sweet salvation of an ice cold beer. I look forward to the British summer with the same fierce optimism every year; this time it’s going to be a corker, trust me.

Stuffed squid are perfect for the BBQ but in the meantime we’re OK because they also taste great cooked indoors.

Two points to remember with stuffed squids – firstly, make sure they are medium sized, not great hulking monsters and secondly, don’t overstuff. As we all know you either cook squid very fast or long and slow; you don’t want them too big or else the squid will be done before the stuffing is warmed through. They also shrink a bit as they cook so don’t pack them denser than a gap year students’ rucksack, or they’ll burst. 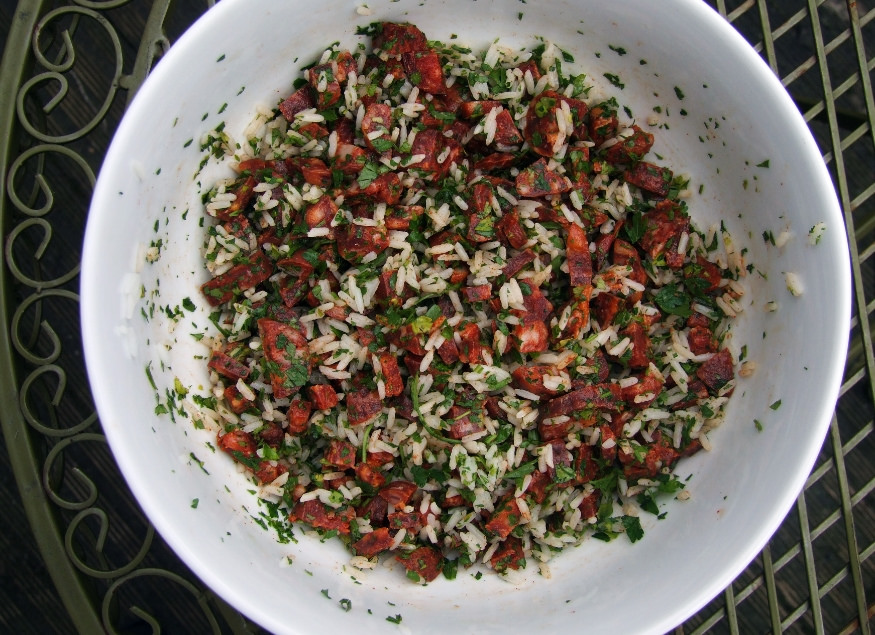 Apart from that it’s child’s play. I’ve made these with cooking chorizo and the cured kind and both are delicious, although I think I prefer cured, as it holds its shape giving you something to really bite down on, each paprika stained nugget exploding with flavour. Ask me tomorrow and I might prefer the alternative.  A sharp, lemon dressed salad is the perfect accompaniment and if it’s summer and you’re living the dream, so is an ice cold beer.

The amount of stuffing you use of course depends on the size of your squid. I used two medium sized squids. Make sure they are well cleaned before you begin. If you use fresh squid then make sure to keep those tentacles for an extra treat.

I used about 150g cooked (and cooled) rice mixed with 250g chopped, cured chorizo sausage, 1 small softened onion and a large handful of finely chopped parsley leaves. I seasoned this with black pepper and stuffed inside the squid, securing with cocktail sticks.Make 3-4 deep slashes in the flesh of the squid – this will help the heat to get all the way through.

When ready to cook the squid, oil them on the outside then season with salt and pepper. You can either grill them on the BBQ – about 4-5 minutes or pan fry them or griddle them indoors. Check they are hot all the way through using a skewer and serve with a lemon scented salad. 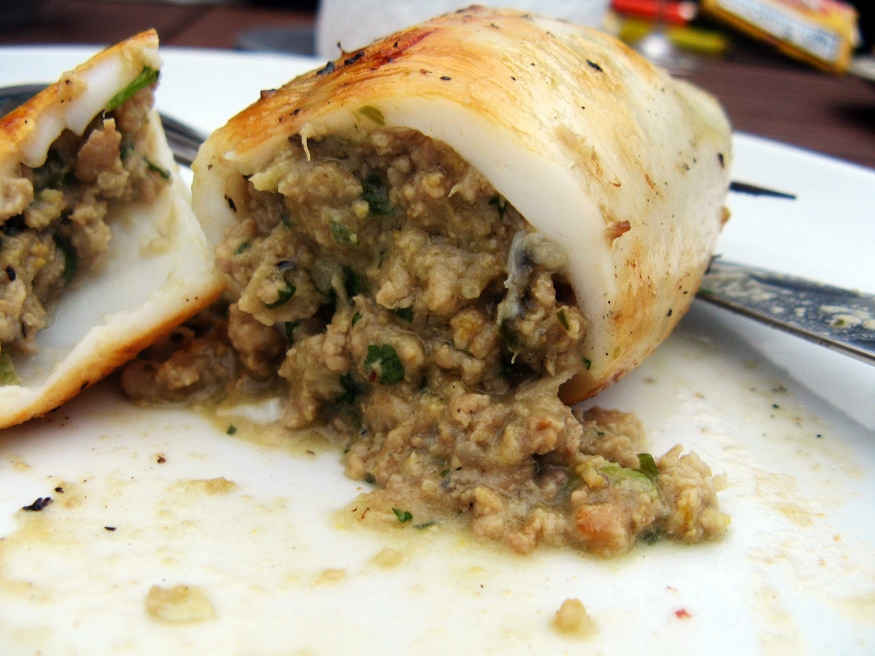 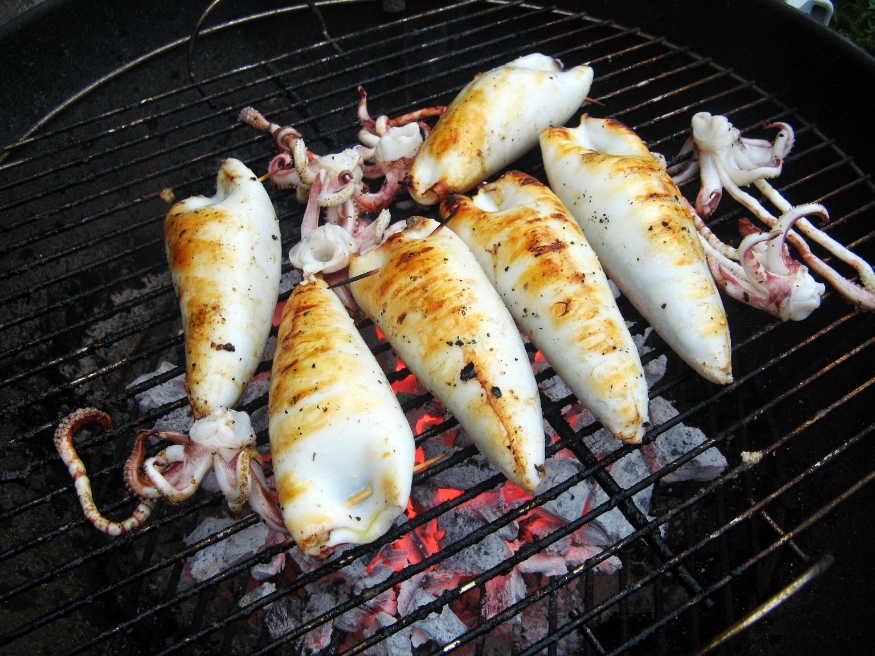