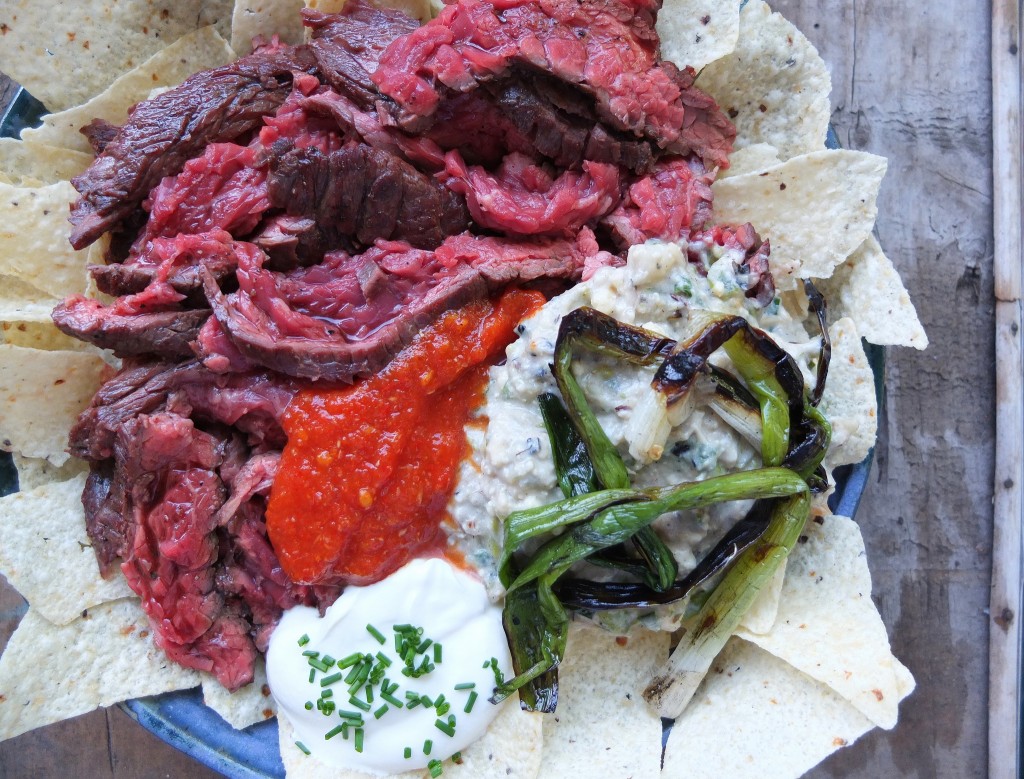 I could have titled this post, ‘how to begin using up 34 kg of spring onions’. Not 3.4, THIRTY FOUR. Don’t ask. Just don’t. Let’s just say there will be lots of spring onion recipes coming your way very shortly. If you don’t like spring onions, you’re a bit screwed really. You’re also a little bit weird because spring onions are fabulous.

Anyway these nachos are great. I imagine you could go to the shops and buy some spring onions in order to make them. A distant memory for old muggins here. After you’ve done that, the first step is to get some decent tortilla chips in – no Doritos. Save those for your hangover or whatever late-night toasted cheese and crisp concoctions may surface from the depths of your sick, sick mind – just leave me out of it. Then you want to get a load of tomatoes, garlic, scotch bonnet chillies and peppers and put them in the BBQ for half an hour or so with the lid on, then blend them up. That’s your tomato sauce. Then the spring onions – char them on the BBQ, chop them, mix them with crème fraîche and cheese as per below to make an awesome dip. Save a few onions for garnish. The steak is a steak – sirloin, bavette, whatever you want – grill it to your liking. Rest, then slice and place on top of the tortilla chips, pour over the juices. Add sour cream. Point face-ward. These were so good I’m almost pleased I was forced to come up with the recipe.

Tortilla chips (good quality, plain)
Steak (sirloin, bavette, even fillet if you’re into that kind of thing. I wouldn’t use a heavyweight like rib eye for this though)
Sour cream
A few chives, snipped

For the tomato sauce

When your BBQ is up to temp and looking ready, whack everything in a tray except the lemon, with a splash of oil, some s and p and leave it in there for about 45 minutes. Allow to cool a little, then remove a bit of the pepper and tomato skin if you can, and also the seeds from the scotch bonnets. Squeeze the half the garlic cloves from their casings and blend it all up. Adjust the seasoning as necessary. You can keep this in the fridge – add a layer of oil on top to lengthen shelf life. I’ve frozen my leftovers.

Coat the spring onions with a little oil, then char the on the BBQ (this is very quick). Chop them up and mix with the other ingredients. Season.

To assemble the nachos

Arrange the chips in a suitable fashion on the plate. Grill the steak (that means get the grill very hot, then season the steak very highly with salt and pepper, then grill it, flipping it regularly to form a nice crust). Rest it, slice it. Put it on the chips. Pour over the juices. Add the other bits and bobs. You know what to do.