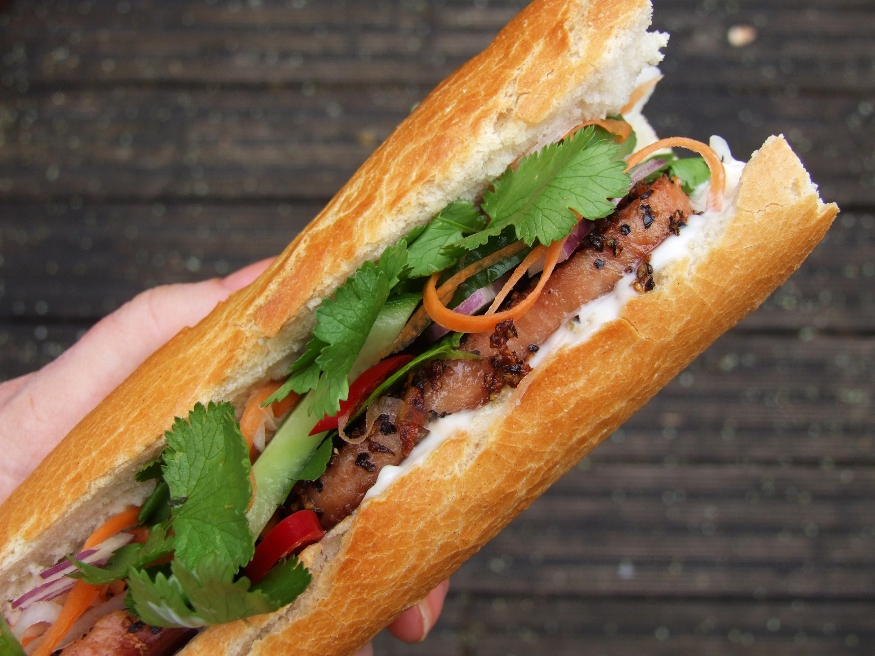 Maybe you are turning up your nose right now, before wistfully reminiscing about the sophisticated little you tugging on your granny’s starched apron strings while she whisked resplendent glossy meringues and taught you all the secrets of perfect pickles. Well while you did that, I was eating SPAM (actually, my nan made stellar pickles and my parents are great cooks but that’s not the point); for me and my childish palate, highlights were salty chopped pig from a tin, and Mr. Brain’s faggots.

As I got older I turned my back on SPAM, deciding I’d grown out of it; I was embarrassed to admit it had ever passed my lips. It was like ditching an old mate because you moved up to big school and decided they’re not good enough to fit in with the cool kids. Harsh. It’s only in recent years I’ve come to terms with the fact that it’s OK to eat something and damn well enjoy it once in a while, even if you know deep down it’s pretty wrong.

SPAM is meat in a can; let’s think about what that means. I’m aware that it doesn’t contain the finest cuts of rare breed swine with a royal bloodline and that what it does contain is salty as hell, conceals a significant proportion of your daily fat intake and slides out of the can with an alarming jelly-lubed slurp. There’s no denying though, that on certain days in certain ways, I’ll chomp my way down memory lane and like it.

And you know what? It’s amazing how many people share in my occasional appreciation. Simon Majumdar for example, revelled in his opportunity to judge at the SPAM cook of the year awards, while my good friend Lizzie introduced me to one of her family’s favourite ways to eat it. Su-Lin serves up a classic SPAM, egg and rice, Sunflower makes some stonking Chinese pancakes and the Hawaiians are mad for SPAM Musubi.

When the people at SPAM offered to send me a cooking set, I accepted with the enthusiasm of the ten year old me. In it were such treasures as a SPAM apron; a SPAM oven glove; two pens (appropriately embellished, obviously); a cook book; a spatula and of course, a tin of SPAM. In return for this gift, the official people have asked me to come up with a recipe. I thought about the best way to use it. It’s a luncheon meat and the only really acceptable time to eat luncheon meat for me is in either something Chinese-style or in a dish similarly spiced, funked and/or pickled…

Enter the SPAM mi (that’s a bánh mì using – you’ve guessed it – SPAM). I smothered slices with a mixture of crushed garlic, black pepper, fish sauce and sesame oil before frying until crisp and stuffing into warmed baguette piled high with familiar bánh mì garnishes. It really hit the spot.

The taste and smell of the pink fried slices transported me back in time almost instantly, but my own personal history with the mystery meat is minuscule compared to the bigger picture. World War II troops practically lived on the stuff and in Hawaii, they still do the same today, feeling sufficiently passionate to celebrate it with the annual Waikiki SPAM Jam festival. It’s even on the menu at Maccy D’s. There’s a fan club, an outrageously famous comedy sketch, a cook book and a museum. While I probably limit my own consumption to a couple of tins per year, it’s a guilty pleasure that I’m happy to embrace because let’s face it, sometimes only the saline whack of a low budget cured pork product will do.

Baguette (to stuff it all into. Apparently the best ones are made from rice flour but I’ve never found one so I just use a normal one and scoop out a bit of the insides if it’s really dense).

For the SPAM, mix the pepper, fish sauce, sesame oil and garlic together well then rub over the SPAM slices and allow to marinate for an hour. After this time, fry the slices in a small amount of vegetable oil until golden and crisp on both sides. Drain on kitchen paper.

To build, lightly warm your baguette in the oven and then smear on the mayo, add the SPAM and all your other ingredients as desired.