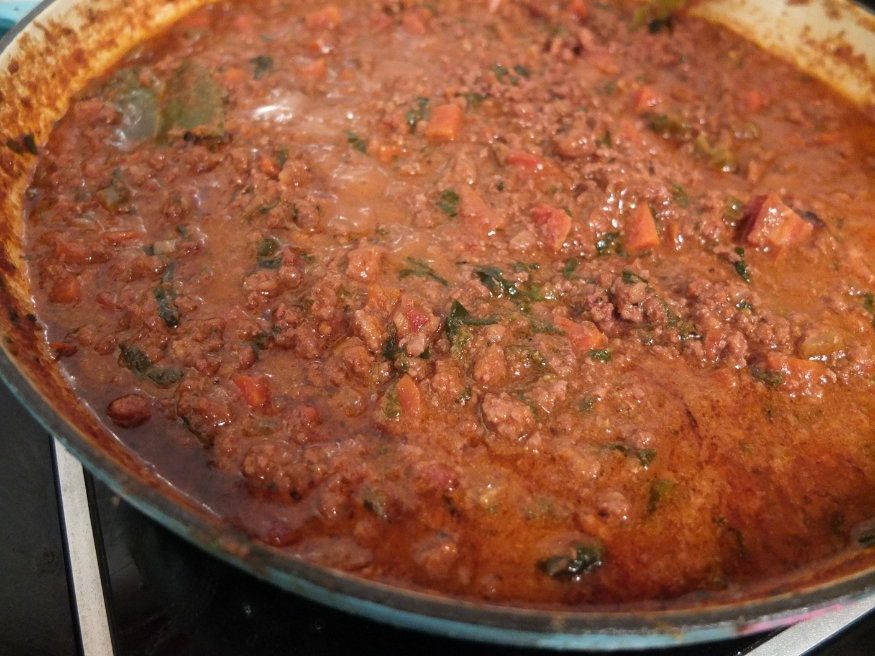 You give me the richest ragu/That’s why I’m in love with you.

Those are Sade lyrics, in case I’ve lost any of my younger readers. She loved ragu, apparently. Couldn’t get enough.

This recipe is from Kenji Lopez-Alt’s book The Food Lab. In case you don’t know him, he writes The Food Lab column for Serious Eats and is also their Culinary Director, whatever that means. Sounds good though, doesn’t it? We’re huge Kenji fans in this house, so much so that we considered building a shrine to him in our living room. Possibly.

His ‘thing’ is that he does lots of recipe testing, to the point where he’s comparing 30 eggs boiled for 30 seconds more each time, side by side, to see which is the best, and he delves into the science of cooking in a Harold McGee kinda way.

I wanted something I could get ready ahead of time since I had friends coming over, so gave his ragu recipe a go. It was fabulous, and had incredible depth of flavour, which is unsurprising considering it contained a paste consisting of anchovies, Marmite, soy sauce and chicken livers, and three kinds of meat. I also went to town with the quality of the ingredients, using Strianese tomatoes, the best Parmesan and hugely expensive pasta. It turns out that last move was a mistake.

Are you hungry? I asked my guests at around the 7.30pm mark. Yes, yes they were. “Magnificent!” I said, and proceeded to be very clever by adding my massively posh pasta to a pan of boiling water. Except it wouldn’t cook. It wouldn’t cook for like, an hour. Maybe more. Those attractive belts of flour and egg which had looked so appealing on the shelf turned into fat flaps of gummy gluten that just would not soften. We ate at around 9pm, after separating the pasta into two separate pans and burning ourselves twice. Someone was so hungry they went to the shop for spaghetti. “No!” I said, shaking from hypoglycaemia, “NO”. We will eat this f*cking clown shoes pasta, mainly because it cost me a tenner.” And so my friends suffered because I can’t control myself in expensive food shops.

Anyway, the ragu is fabulous and you must make it. I’ll admit that the blended chicken livers have one of the most unnerving textures I have ever come across in the kitchen, but you’ll just have to deal. This is an excellent recipe even if it is 100% faffier than any other ragu recipe you’ve ever made. I should also say that it took four hours to cook down, not two as stated in the recipe, which is quite a significant difference. One for the weekend.

This recipe is from The Food Lab cookbook by Kenji Lopez-Alt, published by W.W Norton & Company. I halved the quantities in the recipe and converted them from American measurements, in some cases adjusting them very slightly. I also like to serve it with a gremolata (chopped lemon zest and parsley) which adds some freshness. The original recipe was for 8-10 servings, although I found this half quantity served 8, and you know how much pasta I can eat (at least 300g on my own. What?).

In a food processor, whiz up the chicken livers, Marmite, anchovies and soy. Set aside. In a bowl, combine cream, milk, stock and gelatin. Set aside.

Heat two tablespoons of the oil in a medium saucepan over a medium-high heat until shimmering. Add garlic, oregano, chilli flakes and cook for around 1 minute, stirring. Add tomatoes, with their juice and bring to boil over high heat. reduce to simmer and cook until liquid has reduced by about half. Set aside.

Combine remaining two tablespoons of oil in a large pot with a lid (you will cook the ragu in this) and cook the pancetta for around 6 mins until the fat is translucent. Add onions, carrots, celery and cook until softened but not browned. Transfer to a bowl.

Return the pan to the heat and add the butter, heat until the foaming subsides. Add the three meats and the sage and cook until meat is no longer pink (don’t brown it). Add livers mixture. Stir. Cook for five minutes. Add pancetta mixture. Stir. Add wine. Stir. Bring to boil, then simmer until wine is reduced by half.

Blend tomato sauce until smooth (easiest with stick blender). Add tomato sauce, cream mixture, bay leaves, half the basil and half the parsley to the pot. Stir. Bring to boil, reduce to very gentle simmer. Cover with lid left with slight gap. Cook for two hours. I cooked for two hours, then found it needed two more, one with the lid off. Use your instinct.

Add fish sauce and Parmesan. Season to taste. Remove from heat to cook for 30 minutes. Stir in remaining basil and parsley. Serve with sensible pasta and a gremolata of equal amounts chopped parsley and lemon zest. 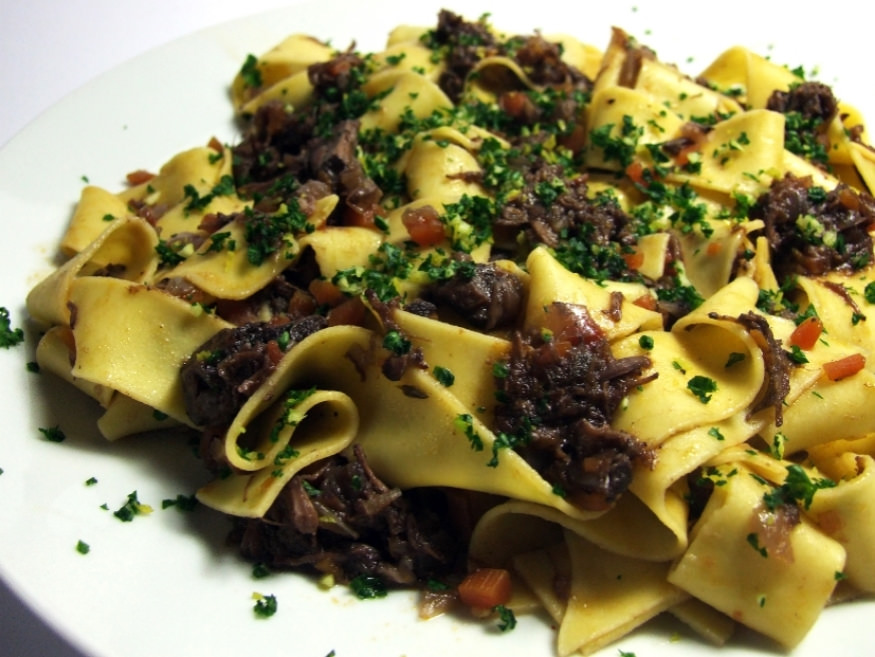 Few things wrap themselves around pasta quite like the ragu. Three and a half hours of gentle simmering and that meat is ready to embrace every fold, nook and cranny of carbohydrate. You wait a long time for it to collapse, reduce and intensify and so a generous portion is essential as a reward. When you’ve finished devouring, it is perfectly possible that you may need a lie down and then, probably, a nap.

I managed to stick out three and a half hours cooking this ragu. At one point I thought it might need four, and in my delicate mental state owing purely to the anguish of delayed gratification I almost shed a little tear. I’m sure none of you lot would be so fragile and unreasonable in the face of a half cooked stew though, so don’t let that put you off. 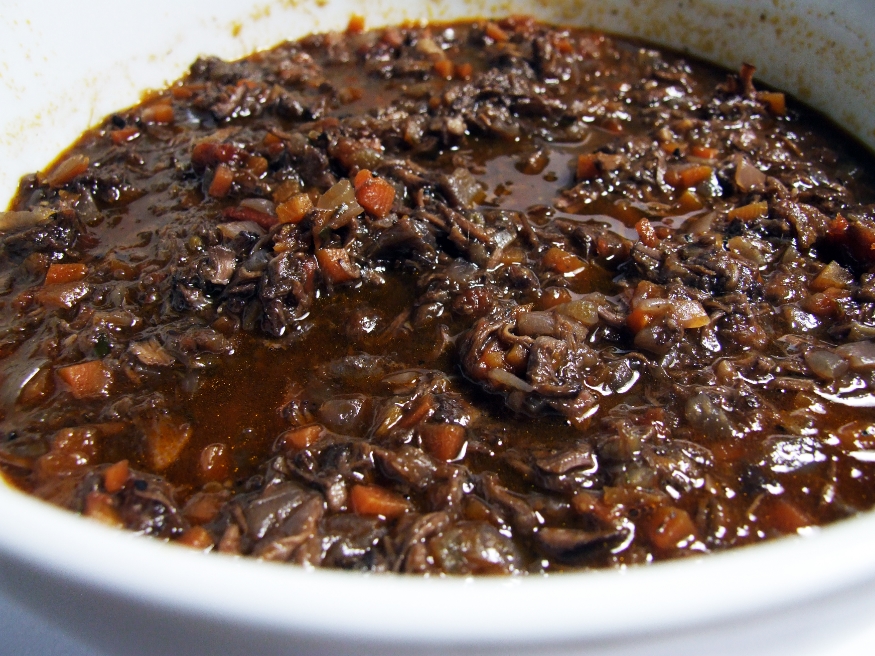 While the persona of the ragu is like that of a mature and erudite gentleman, the gremolata zips in with the energy of a three year old given free reign with the sherbet dip dabs. The chipper mix of lemon zest, parsley and garlic is, for me, the perfect condiment, skipping around those wintry depths with perky high notes.

This is solid Sunday food. It’s indulgent, comforting and takes a long time to cook. It also gives you time to get into character with it; I pretended I was Keith Floyd in his heyday as I poured an entire bottle of gutsy red over some large pieces of meat and then settled down with a glass of my own.

Add some olive oil to a large, heavy based pan and add the onions, celery, carrots, bay leaves and garlic and sweat gently, with the lid on, for 10-15 minutes until they softened. Season the beef shin well all over and add it, plus everything else. Bring to the boil then turn down very low, put the lid on and simmer gently for 3-4 hours, until the sauce is thick and the meat is falling off the bone. Remove all the pieces of bone and discard. Flake up the meat if it hasn’t done so by itself and add back to the sauce. Adjust the seasoning and serve mixed through pasta of your choice (papardelle is good as it is quite big and robust).

For the gremolata, just mix everything together and sprinkle over your pasta.