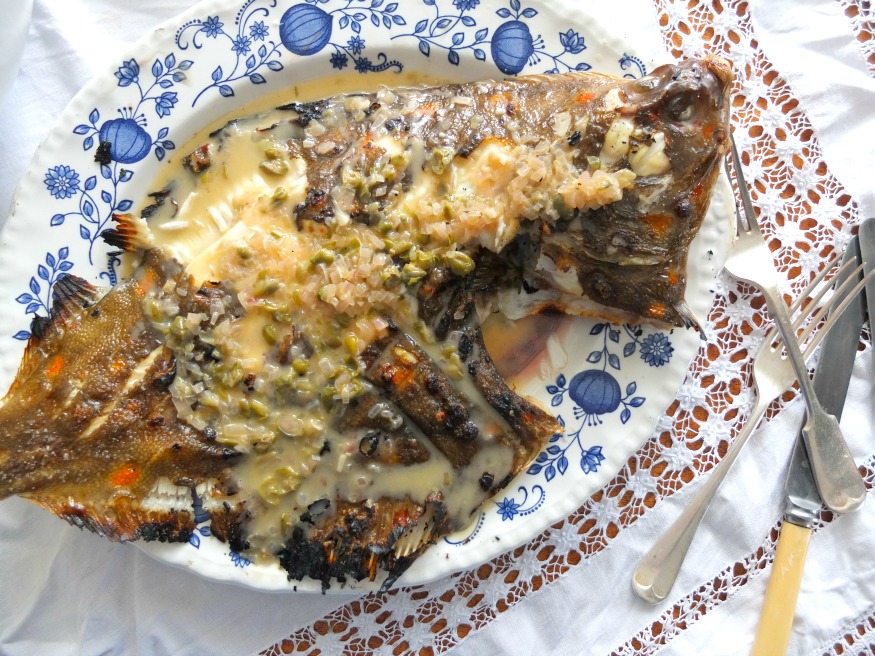 Bear with me because I know the title of this post is ridiculous. I was supposed to be going for dinner this evening, and not just any dinner – a CRAB dinner. I have been denied that opportunity thanks to a bathroom emergency and I don’t mean anything to do with me (ew), I mean an emergency which has had a plumber in there with an angle grinder for the past hour and counting. As I write this he is swearing because the job is proving so difficult and I’m too scared to go in there so I’m sitting here, telling you about this fish and its sauce instead.

This all started with a bottle of wine that had gone a bit wonky. We have lots of bits of wine hanging about in this house because of Donald’s job, which is – wait for it – in wine. He’s a sommelier/consultant/winemaker/general wine dude and you can see how that leads to lots of samples and other bits being thrown our way. Hard life, poor us, etc. Some of it gets oxidised in the bottle which means it goes a bit ‘off’ and tastes all sorts of wrong like someone just peed in it. I imagine. 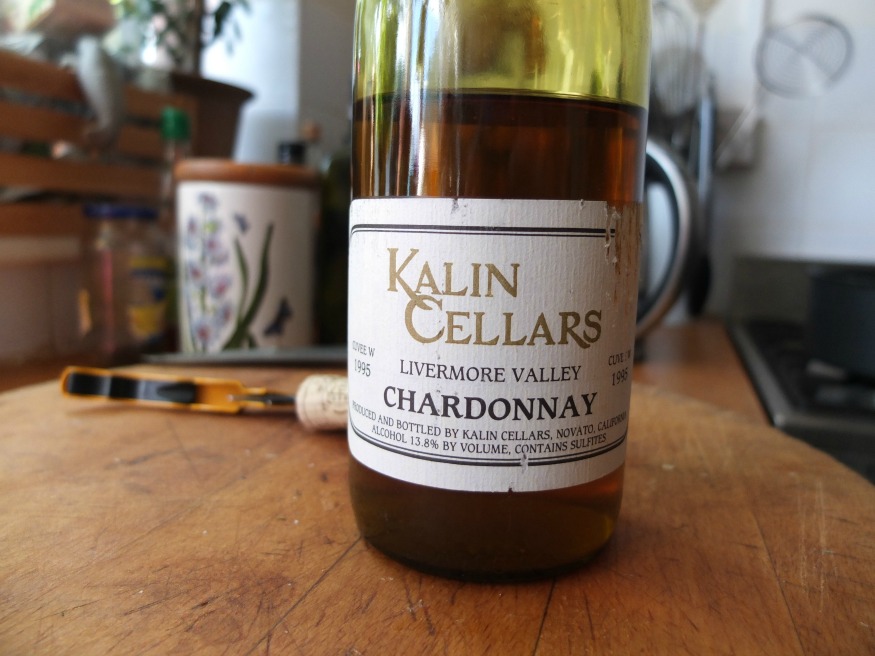 To me, these flavours have a lot in common with natural wine but I guess that’s a rant for another day. I’ve drunk a lot of natural wine in my time because lots of my mates are wine people and Donald is, well, Donald. I am also obviously curious when it comes to these things. I have run the full spectrum from actually quite enjoying natural wine to absolutely f*cking hating the stuff and right now I’m closer to the latter end of the spectrum. This may change again, who knows. At the moment I like a glass of something that’s had a shit load of stuff added in to stabilise it and make it taste better and I have made my peace with that, thanks very much.

Anyway, we couldn’t help but wonder (*Carrie Bradshaw moment*) whether these ‘orrible oxidised bits of wine might be useful in cooking, somehow. That was when Donald hit upon the idea of the sauce. It tasted too grim to drink but some of those qualities we don’t like in the glass might actually be nice in a sauce, we reckoned. On its own, the wine tastes stale but in the pan, it turns to a sort of intense sherried nuttiness, especially with a load of butter lobbed in because… BUTTER. 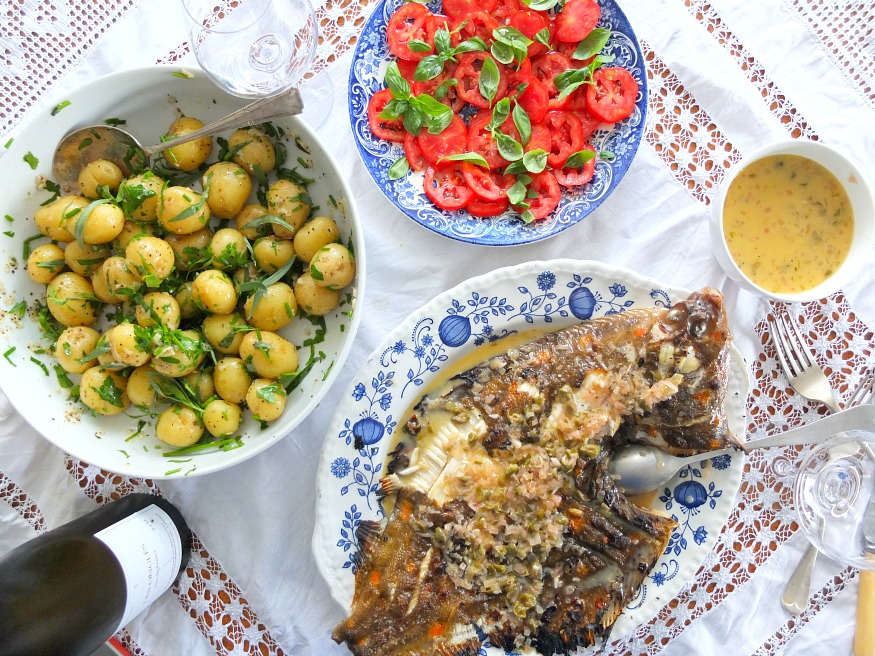 We grilled the fish whole on the barbecue because I obviously like to realise my full barbecue potential whenever possible (#bestself #goals) and it was brilliant. We had a tomato salad alongside, which is something we eat with practically every meal in summer and then potatoes because something needs to be mashed into the sauce (and eaten cold the next day). About the potatoes: they’re covered in an expert-level amount of garlic and all the herbs. Give the potatoes, and the people, what they want.

Barbecued Plaice with an Oxidised Wine and Caper Sauce

1 large plaice
3 shallots, very finely chopped
100g butter
2 large glasses of Kalin Cellars 1995 Chardonnay that was opened one month earlier and then left in a fridge (or, y’know, whatever you have)
2 tablespoons capers, washed then roughly chopped
Olive oil

Heat a barbecue for direct grilling. Pat the fish dry, rub it with a bit of olive oil, season and place (LOL) into one of those barbecue fish cages. It’ll only need around 5 minutes each side as it’s a flat fish.

To make the sauce, melt the butter and gently soften the shallots. Add the wine, whisk it to emulsify it a bit then reduce by half. Add the capers.

When the fish is done, pour some of the sauce over and serve the rest on the side.