In his excellent book, ‘The Yoghurt Cookbook‘, Arto der Haroutunian talks about the health promoting properties of the white stuff, and its supposedly life lengthening power. By my reckoning I should live until at least 180, providing the yoghurt can counteract a history of fags, booze and fast livin’.

Cultures that consume a lot of yoghurt, such as the Georgians, are huge believers in its supposed powers, and have used it as a cure for…well, pretty much everything actually, for centuries. I can’t vouch for the validity of those claims, but I can vouch for the taste, and its hangover-curing properties. This buffalo yoghurt made in a traditional clay pot brought me back from the brink; I’m talking nausea, shakes, the creeping doom…not a whisker of it after I’d gobbled this lot down at the side of a rocky road in Georgia. The yoghurt I tried in Ethiopia recently was a little more…challenging. I asked the lady we were visiting how she made it, and she replied ‘well I just put the milk in this bucket (straight from the cow in the back yard) and leave it on the shelf for three days.’ That’s one approach, although it is of course really just curdled milk and not ‘proper’ yoghurt. The taste was very sour and it had a loose wobbly texture. The Ethiopians often mix it with chilli powder and drink the whole glass like a shot, and I can see why. I spent the next three hours concerned about potential gastrointestinal payback. Labneh, then, is basically yoghurt that’s been strained of its whey. Of course, I adore it because, well it’s like yoghurt to the power of ten. Once strained, the resulting substance is more akin to cream cheese, but with the obvious tartness of yoghurt; that sour freshness that yoghurt-lovers crave.

I’ve found that the best brand by far for making yoghurt is Total. It’s even better than the mega-expensive stuff I bought from the farmers’ market, which relinquished hardly any liquid. It is thick and creamy before straining  which is a good thing if you’re eating it straight up, but with labneh you want some residual sourness. To make labneh, mix the yoghurt with a large pinch of salt, then wrap in muslin, or as I have done, a clean/brand new dishcloth. Hang in the fridge (to be honest I used to just hang it in a cool place but now I have a very hot kitchen so the fridge it is) and allow the whey to strain away for about 5 to 6 hours. The longer the strain, the thicker the labneh, obviously.

After this time it is ready, and can be used or preserved in a number of ways. Try rolling in herbs and preserving in olive oil…it’s then lovely just spread on bread. It’s also delicious rolled in dukkah, or za’atar. Straight up it’s best topped with punchy flavours like anchovy and chilli, or dolloped onto salads as you would use a goat’s curd for example.

My favourite way to use it right now however is to stuff it into Turkish peppers before slinging them on the BBQ. They are lovely when wrapped up inside a flat bread with a kebab, oozing their creamy centres against the sizzling meat. If you’re up for it, you fly bastards, stuff some green chillies instead. In a bowl mix the yoghurt with the salt. Line a bowl with the muslin or cloth and scrape the yoghurt into it. Tie the top with string or whatever you have and suspend it from something. I used to use a cupboard handle but now I have a very sun filled, hot kitchen and so I hung it in the fridge. Set a bowl underneath to catch the whey. Leave for 5 or so hours. It will be usable but soft after 3. If you want to make balls with it and preserve them in oil then the longer the better as the labneh will need to be fairly firm for rolling.

Cut the tops off the peppers and de-seed them without cutting the sides. Stuff with labneh. Rub with oil, salt and pepper and either grill on a BBQ or underneath a hot grill until charred in places and soft. Serve either in kebabs, or on toast, in pittas… 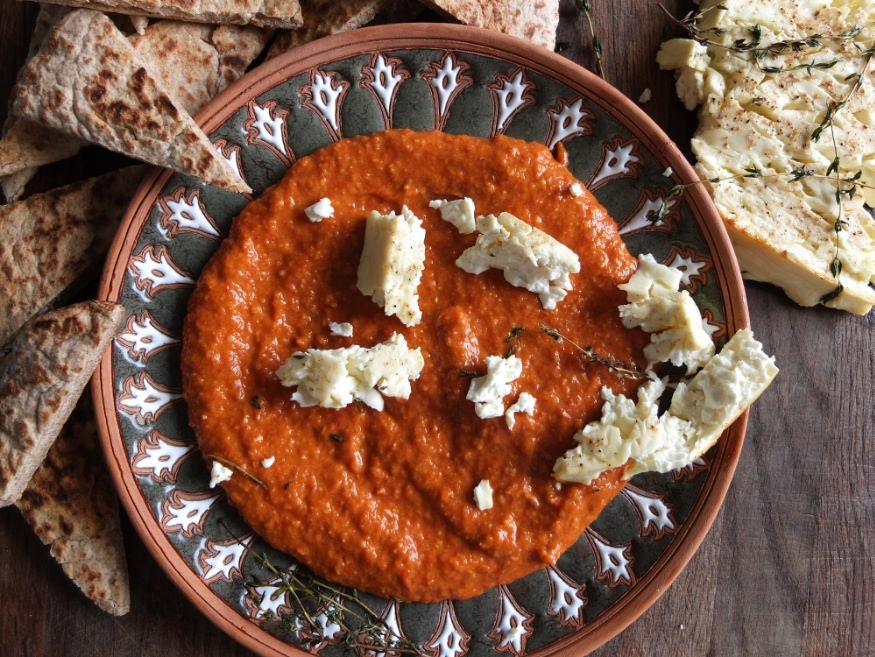 I’ve had a few requests for the muhammara recipe we served at the Warwick Wingding. I’ve updated it recently so it’s worth posting again. Do try to find the chilli pepper paste* if you can as it has a unique flavour, although regular chillies also work. I often leave out the cumin, too.

Put the peppers on a roasting tray, drizzle with olive oil, sprinkle with salt and pepper then use your hands to mix around until all the skins are covered. Roast until the skins are blackened then place in a bowl and cover with cling film. Leave for 10 minutes. The skins should now be easy to remove. Chop roughly, discarding the seeds.

Put the peppers, walnuts, breadcrumb paste, chillies, cumin, pomegranate molasses and garlic in a blender and blend to a paste. Remove from the blender and mix in the olive oil then taste and add salt.

* The chilli pepper paste is available from Middle Eastern food shops and is often labelled ‘red pepper’ or ‘hot pepper’ paste. It comes in jars.