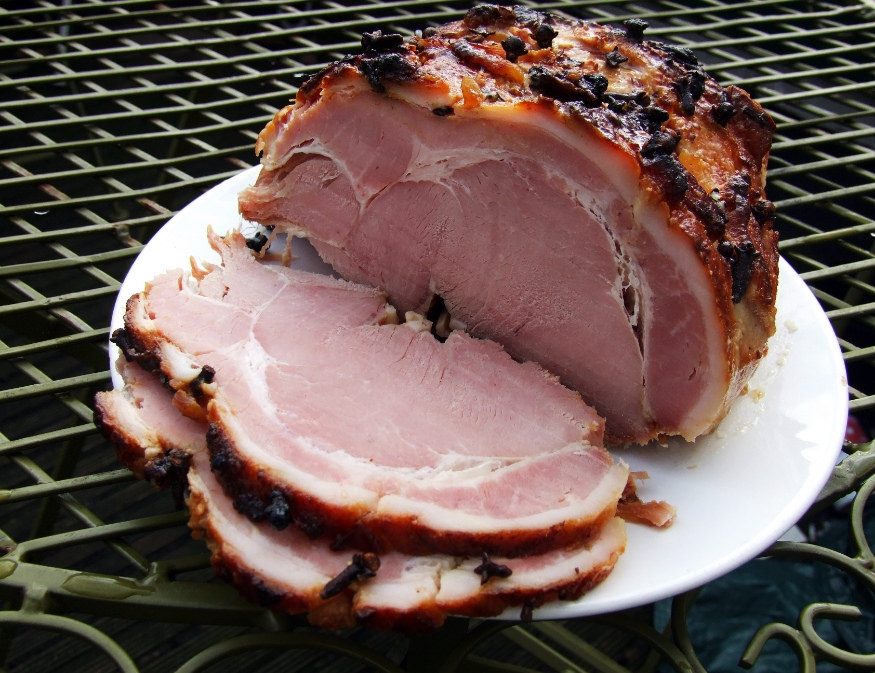 As you can probably tell, I’m into American food at the moment; perhaps the pulled pork with Boston baked beans or wedge salad with blue cheese dressing gave it away? Cooking ham in coca-cola is one of those ideas that sounds just outrageous but is actually brilliant. I’ve cooked it many times now. The cola imparts, as you would expect, a sweet and subtly spiced flavour to the salty ham and I finished it with a sticky glaze of molasses, mustard and rum, which melted into a glistening varnish.

While pondering how to eat it (it takes 2.5 hours to cook, I pondered a lot), my thoughts inched ever closer to the idea of a towering sandwich; a Man vs. Food style beast topped with deep-fried pickles and hot sauce. Yes, deep-fried pickles. I first saw this genius idea on Homesick Texan, a blog partly responsible for this American food phase. Pickles? Good. Deep-fried stuff? Gooood. Together? BOOM! I decided on a combo of traditional dill pickled cucumbers (I always use the Krakus brand since my friend’s Polish mother recommended them – so crisp), pickled chillies and those sweet little silverskin pickled onions which are totally under-rated. A crunchy cracker base (base, base, base) mixture surrounds juicy, crisp pickle. They made an excellent snack and a serious sandwich garnish that says I Mean Business.

The ham was easily torn apart with frantic fingers and stuffed, chunk on juicy chunk into a roll. We topped each with a selection of the pickles and sauce made with 50% home-made hot sauce and 50% ketchup. Oh my. This is what Sundays are all about.

Ham Cooked in Coca Cola with a Molasses Glaze

1 x 2kg ham. Mine was was just over this weight (I used a boneless one; a bone will add more flavour but you need to account for the weight)
1 x 2 litre bottle full-sugar coca cola
1 white onion, peeled and cut in half

Put the ham in a large pan, skin side down. Cover it with the cola and add the onion. Bring to the boil then reduce to a good simmer. Put a lid on, but not tightly; rest it so you have a teeny gap at one side. Cook for 2.5 hours (or just under if your ham is exactly 2kg).

When the ham is nearly finished cooking, preheat the oven to gas 7/210C

When the cooking time is up, drain the ham, put it in a dish then remove the skin so that you are left with a thin layer of fat. Score the fat into a criss-cross diamond pattern. Mix the glaze ingredients together well and brush the glaze all over the ham. Push a clove into the points of each diamond. Cook it for 5 minutes, then brush again with the remaining glaze. Cook for a further 5 minutes then remove the ham from the oven and allow it to cool.

Vegetable or groundnut oil, for deep-frying

Cover a plate with flour and sprinkle with pepper and paprika. In a bowl, mix the egg and buttermilk. Put the crackers in a food processor and pulse to crumbs; spread this mixture on another plate. Dip each pickle first in the flour, then the egg, then toss about in the crackers. Set aside. Heat your oil for deep frying in a sturdy pan until it shimmers. You can test if it is ready but putting a little piece of bread in – if that starts to properly sizzle and fry, you’re good to go.

Fry the pickles in small batches; do not crowd the pan. Put the cooked pickles on a plate lined with a couple of sheets of kitchen paper and put in the oven to keep warm while you cook the rest. 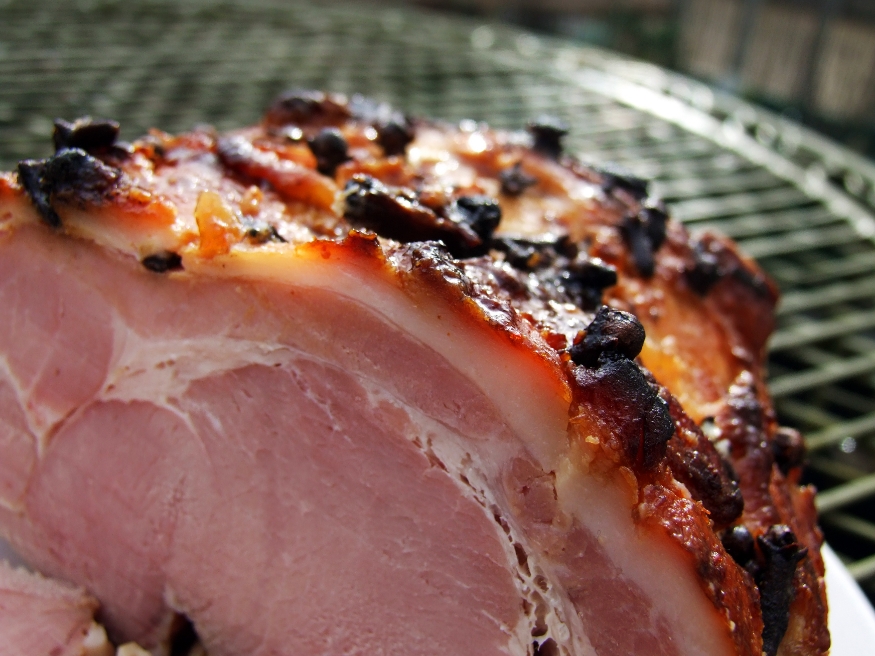 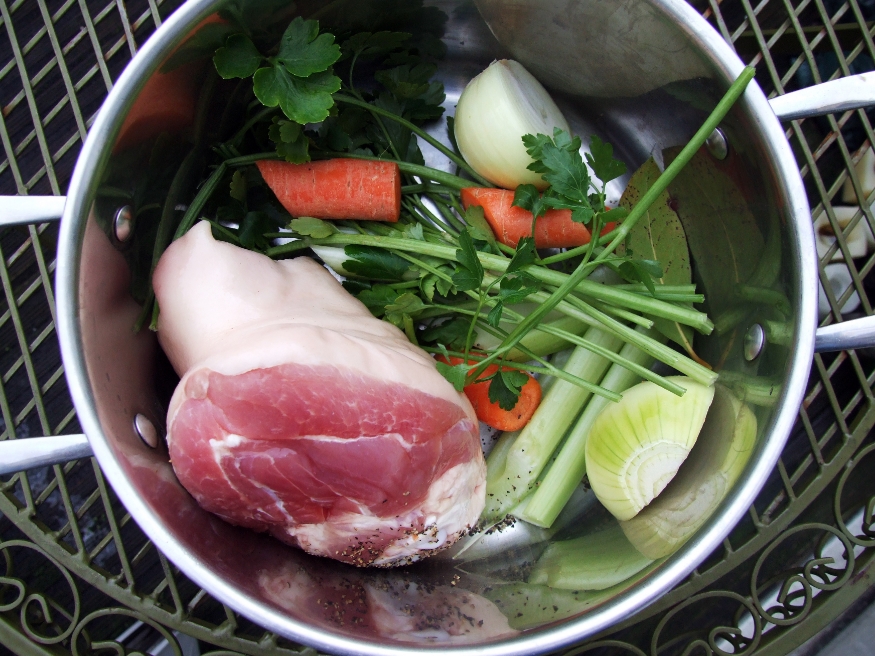 It’s winter, it’s cold and so I crave the pie – all the time. Deep filled, meaty pie with buttery pastry. Pure comfort food. First I toyed with the idea of using lamb shanks in a pie, all St. John style with the bones sticking out the top but I finally decided on a cheap as chips ham hock filling.

Method
– Put the hock, halved onion, carrot, celery, bay leaves and peppercorns in a large pan and cover with water. Bring to the boil then simmer for 2-4 hours, until the meat is falling off the bone.
– Remove the ham and set aside, strain the liquor and reserve for later use.
– Cook the leeks and onion gently in butter until soft – about 10 minutes, then add the garlic for a further 3-5 minutes. Meanwhile, make the bechamel.
– Put the milk, bay leaf, mace or nutmeg and peppercorns into a pan and bring slowly up to simmering point.
– Remove from the heat and strain the milk into a jug.
– In a clean pan, melt the butter gently, add the flour and stir to a paste. Add a little milk at a time, stirring to make sure all is incorporated.
– Start adding larger quantities, as if you are making mayonnaise, stirring with a whisk.
– When the lumps are gone, add the cheese and whisk again until smooth.
– Remove the meat from the hock, taking care to avoid the fattiest bits and combine with the leek mixture and the bechamel. Transfer to a pie dish. Roll out the pastry to desired thickness (I dunno, 1cm?) and top the pie with it. Brush with beaten egg.
– Bake at 190°C/ 375°F/Gas 5 for about an hour until golden brown.