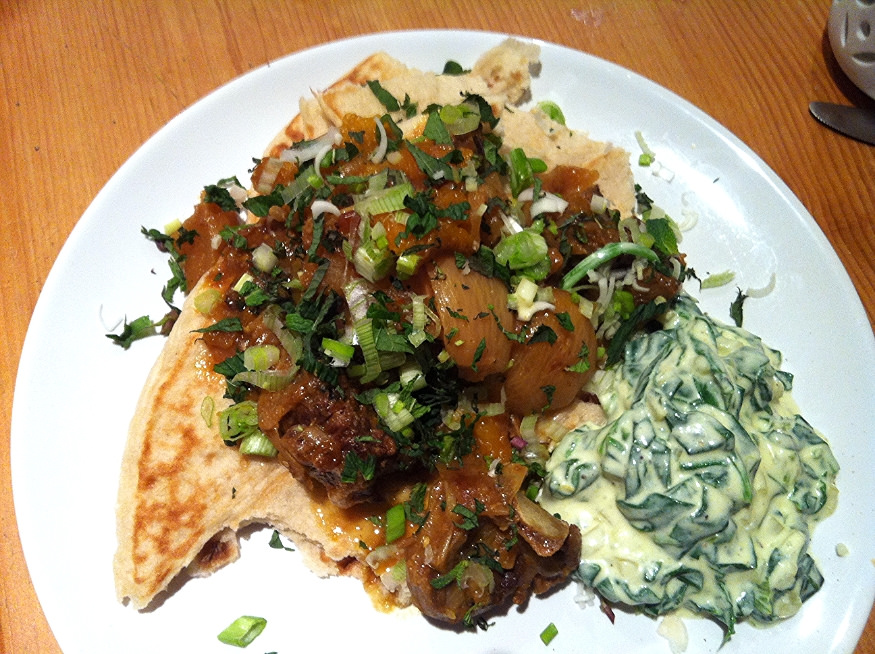 Tagines have always been something I’ve viewed as having great potential to be really tasty, but I’ve never eaten a good one. What I imagined in my head to be a thick, rich, aromatic stew with complex flavours always arrived as a thin, watery bowlful bearing way too much dried fruit.

Because I am a spoiled and lucky girl, I received a magnificent tagine for Chrimbo; a chance to turn things around and make the tadge I’ve always wanted, Peckham style.

The tagine is heated on a little metal thing that looks like a ping pong bat with dimples in it, which helps to distribute the heat evenly across the base. It’s important that the tagine is heated slowly, otherwise it will crack and spoil all your fun before you’ve started.

The base was thickly covered with a bed of onions, the idea being that they would cook down, becoming silken and lush and absorbent of everything above. This being Peckham (bruv), the meat had to be goat, which is very easy to come by here. Its ballsy mutton like flavor is perfect (you could obviously substitute mutton if you can find goat) and it loves long cooking to become properly tender. For veg, some of those little white baby aubergines, which also need a good simmering into submission (they remain stubbornly bitter otherwise) and some small turnips, diced.

For the fruit, which for me is potentially the making but most commonly the breaking of a good tagine, I bought dried fruits from Persepolis, ending up with a kind of Moroccan/Persian hybrid recipe. There are many similarities between the cuisines. In went a dried lime, which the Iranians add mostly to stews where they bob about, gradually releasing a flavor which is like a lime essential oil, emerging at the end shriveled and spent. Apricots went in too, but not those horrible overly sweet and sulphurous supermarket ones but fragrant perfumed Persian fruits. A few scarlet barberries flecked the top, adding sourness, like tart cranberries.

For heat, I couldn’t help whacking a scotch bonnet in. I’m sorry. If I didn’t I’d be betraying Peckham. It was left whole though and just pierced, to contain heat but leach flavour. Having impulse bought a bag of African hot peppers, a couple of those went into a spice paste with loads of garlic, two types of paprika and a shed load of ras el hanout. It could have blown our heads off but didn’t; a bit on the hot side for a tagine, but with an enjoyable slow build.

After three hours of simmering and steaming what emerged was the tadge I’d always wanted; deep and complex, sweet then spicy then sour, lips were sticky from slow cooked onions and goat fat. A scattering of mint and spring onion freshened things up at the end.

This is, as you would imagine, even better the next day and again the day after that. I served it with flat bread and Sally Butcher’s Borani-ye Esfanaj (spinach with yoghurt – from Persia in Peckham), which is one of my favourite yoghurty arrangements of all time.

Ideally I would have marinated the goat overnight in the paste then added it straight to the tagine without browning. I didn’t because I wasn’t organised enough so I’ve set out the method below as I cooked it.

Start by heating the tagine slowly. Add some olive oil, the onions and scotch bonnet chilli. Let the onions cook down gently while you brown the meat.

Cover a plate with flour and season it with salt and pepper. Dust each cube of the goat meat in it. Heat a frying pan and add some oil. Brown the meat on all sides. This will need to be done in several batches. Add this to the tagine, followed by all the other ingredients, including the paste. Season with salt and pepper and cook on a lowish heat for three hours, stirring every now and then after the first hour or so. After two hours, I’d advise you pick out the scotch bonnet chilli, because it’s only a matter of time before it bursts and you get a lot more heat than you bargained for.

Scatter over the mint and spring onion and serve with plenty of flat bread for dipping.