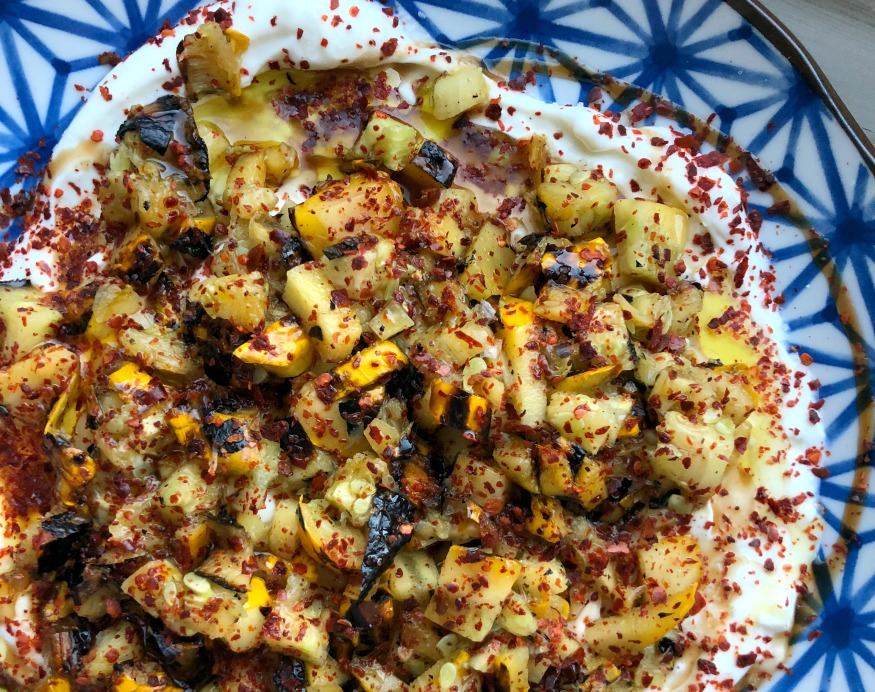 Hello! Yes, I know, it’s been ages. I’ve had a change of job and I’m back in the kitchen developing recipes full-time, doing the odd bit of food writing on the side and of course, working on Pit. I couldn’t be happier because it just feels so right, plus I’ll have much more time to share recipes here.

Here’s something I made off the cuff last night which turned out really well, particularly considering it began with a lonely (albeit sunshine-yellow) courgette. With a potentially watery, flavourless vegetables like this the success of a recipe depends pretty much entirely on the cooking technique; treat it poorly and you will be punished. We’ve all had pallid courgette in an insipid ratatouille or squeaky aubergine in a hastily layered Melanzane Alla Parmigiana. One of my favourite ways to cook courgettes in the summer is to sling them right into the coals, or as we call it in the BBQ game: cooking ‘dirty’. This technique can be applied to lots of different vegetables (as with these tacos) or to steaks (where the direct heat and charcoal help to form a mega-crust).

You just lob the courgette in there whole once the coals are at regular cooking temperature (i.e. not flaming still) and in 10 minutes you have a vegetable that is cooked to varying degrees; charred in places on the outside, starting to collapse near the skin and just cooked through at the centre. Once chopped it’s useful as an ingredient in salsas, or just as a side dish on its own but I recommend you try it this way with yoghurt and pomegranate molasses.

This is best consumed when the courgette is still warm as it’s a pleasant contrast to the cold garlic-yoghurt. The juices also begin to seep out and mingle with the other flavours and if you don’t enjoy this scooped up with toasted bread then frankly we cannot be friends.

This is very easy. When your coals are ready for cooking, put the courgette directly on them. Turn it every so often until blackened patches appear all over and it feels soft (but not falling apart) – around 10 minutes.

Mix the garlic with the yoghurt and spread onto a plate. Chop the courgette and place on top of the yoghurt. Drizzle with olive oil and pomegranate molasses. Sprinkle with good sea salt and the Turkish chilli flakes. Eat with fluffy Turkish bread (or pita, or charred sourdough at a push). 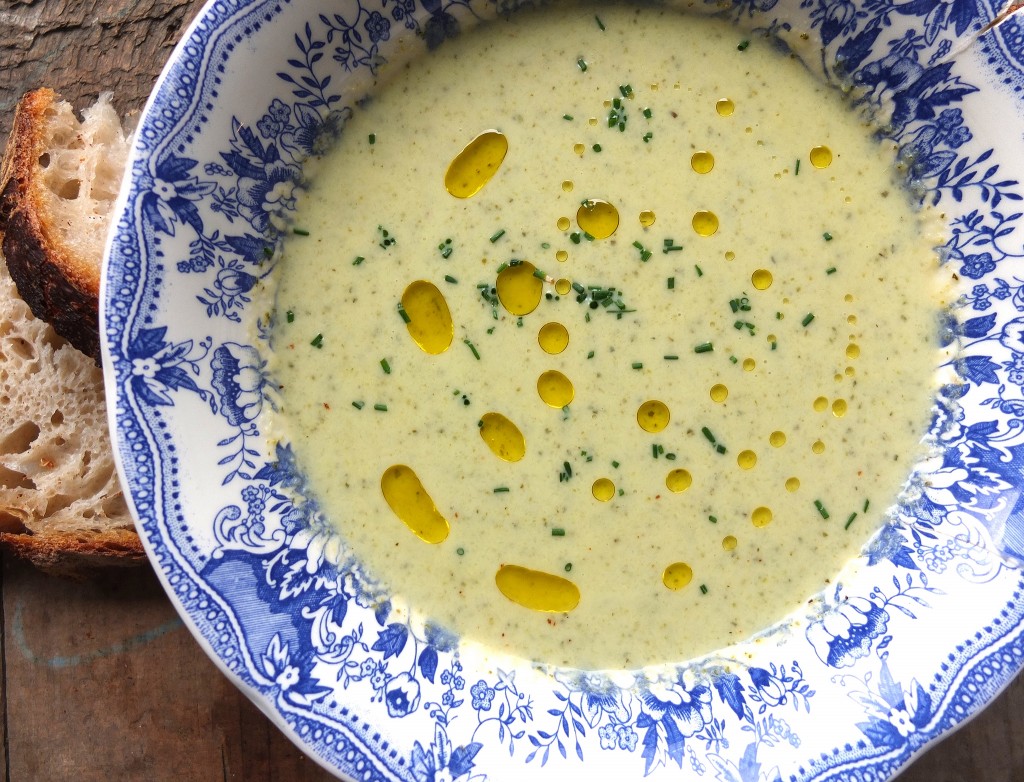 I’ve never really been a soup person. I think this stems back to living in shared houses when someone would always make a vegetable soup with all the leftover rubbery carrots and cabbage cores that had been quietly seeing out their final weeks in the salad drawer. This ‘soup’ would always end up too thick – a vegetable sludge – which is down to the fact that everyone, when they first make a soup, thinks that it’s just about sticking everything in a pot and then blending it up. The novice soup maker has no care for the balance of flavours in the soup, nor the consistency of it. We’ve all made that vat of murky brown/green paste and been stuck with it for a week. If you’re a student then it’s preferable to leave it in the fridge for months until the smell is reminiscent of The Bog of Eternal Stench. Finally, someone else throws it away. That involves a combination of forcing down the sink (it’s too solid) and dribbling into the bin (it’s too liquid). I am scarred.

Only certain hot soups are acceptable to me now (tomato, French onion, bisque) but I am very much into most of the cold ones (gazpacho, ajo blanco and all those that fall into the yoghurt category).

This soup uses courgettes, as you’ve probably gathered. It’s light, summery, fresh and cooling. You can warm it gently though if you prefer, particularly since the weather is so unpredictable. A few edible flowers (chives, pansies) on top would look very pretty as a garnish if you have them.

Sweat the shallots in a little oil until translucent, then add crushed garlic and spices. Cook for a few mins, stirring. Add the courgettes, then cook on a medium heat until softened. Add the stock and cook briefly until it smells awesome. Season with salt and pepper.

Blitz in a food processor (you know the rules here, right? Don’t put too much in at once). Allow to cool, then add the yoghurt. Blitz again, then pass through a sieve. When fully chilled, check the seasoning again, ladle into bowls, garnish with a dribble of olive oil and the chives, snipped. Serve. And so yeah I decided not to make it *cough* this year. It would have to go into my lunch and dinner and so I made this frittata, which I wasn’t even going to bother telling anyone about but bloody hell it was delicious. The key I think is to cook the marrow so that it still has some bite, i.e. don’t let it go soft or worse, mushy or even worse, watery. The courgette flowers look gorgeous of course but when used like this rather than deep fried you can actually taste them. They have a really pleasant peppery flavour that is not really discernible when they’ve been stuffed with cheese and deep-fried, even though of course I do like things that are stuffed with cheese and deep fried because I am NORMAL. The basil is, well it’s basil and you know all about that – tasty, innit. So it’s all very high summer, yah? And I didn’t even pay for the courgette flowers like a knob this time! My friend Tai grew them in her garden. I didn’t realise courgette flowers had so much of a flavour, actually, since I’d only ever eaten them stuffed with cheese and deep fried. I think they deserve slightly more delicate treatment to be honest. I filled them with the elusive crab meat and some itty bitty brown shrimps and fried them in a frying pan with just a touch of oil. Very good indeed with chilli and lemon on top.

Mix the crab, shrimp and ricotta together and season. Stuff this mixture carefully into the flowers – do not overfill, it’s very tempting. In a frying pan, heat a little vegetable oil and gently fry the flowers until starting to colour on the outside. Eat with chilli, lemon and a glass of chilled white wine.