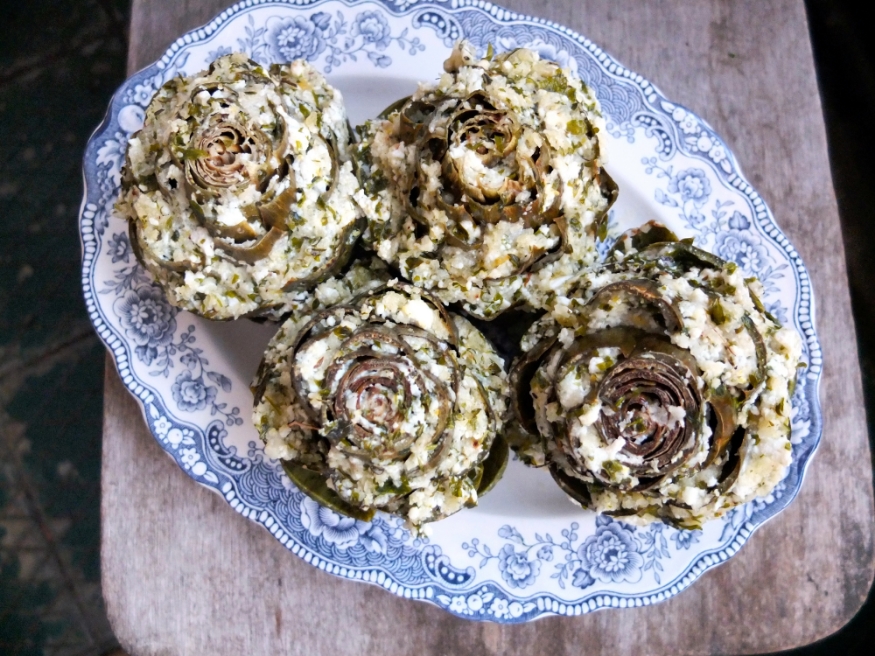 Oxford, despite being a rather famous and much visited city, doesn’t really have many good restaurants. At least, it didn’t when I lived there for a good five years and I haven’t really heard any news to the contrary since. Maybe I’m out of touch.

One diamond in the rough used to be The Magdalen Arms, a pub on Iffley Road, which served food that was everything pub grub should be but rarely is; un-fussed and generous, yet skilfully cooked. I remember a resplendent crab, nothing more than plunged into boiling water and served whole, ready to be worked over, the meat dipped in quivering mayonnaise. We sat in the sunshine and cracked, delved and mined its nooks and crannies for meat, rocking around in our seats on the back of copious amounts of rosé.

Another highlight was a stuffed artichoke, leaves splayed and crammed fat with goats’ cheese, herbs and breadcrumbs, shiny with olive oil. We teased away the leaves and sucked the creamy, intense stuffing from them. This was probably about 3 years ago and the dish still enters my thoughts occasionally, hence, this recipe.

Once the leaves are sucked clean, there is of course the sweet, soft heart to be had. A lovely, leisurely starter.

(serves 2-4, depending on appetite)

Snip the tips off the artichokes leaves and stems, turn them upside down and give them a good rap on the counter top to make the leaves splay out a bit. Give them a bit more encouragement to open up using your fingers, then keep them in a bowl of water with a squeeze of lemon juice. This supposedly stops them from going brown, although they always seem to do it anyway.

Prepare the stuffing by mixing everything together and adding some salt and pepper. Stuff the mixture into the gaps between the leaves then arrange the artichokes in a pan where they fit snugly, you don’t want them moving about in there. The advice is not to cook them in a pan made of reactive metal such as iron or aluminium, again because it makes them discolour although again, I find they do anyway.

Fill the pan with water so it comes about a third to halfway up the artichokes and add the other tablespoon of olive oil. Bring to the boil, then reduce to a simmer and put a lid on. Cook for 25 minutes, or until the leaves come away without too much resistance.

Allow to cool for 5 minutes or so, then serve. With napkins. Lots.