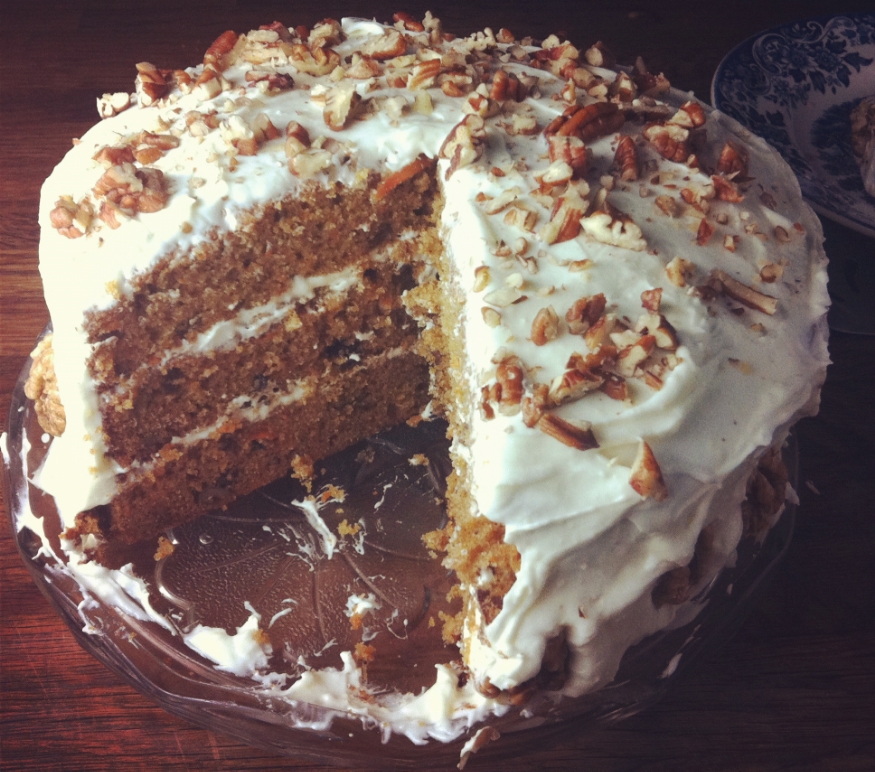 I wasn’t going to tell you about this cake (as you can presumably tell from the shoddy Iphone photo) but it’s so good I can’t help myself. Basically, I’m on a mission to make the ‘ultimate’ carrot cake because I think it’s just the best cake ever. The crumb stays so moist with a particular kind of sweetness from the carrot shreds, which along with the walnuts also give it an amazing texture. The final whammy is of course, CREAM CHEESE ICING, which should be a clincher in anyone’s book because it is the most delicious icing known to woman. Butter, cream cheese, sugar. Hubba.

So anyway, I’m trying out different recipes to get a feel for things. This is the Hummingbird Bakery version.

To their standard recipe I added the zest of half an orange, plus I used half walnuts and half pecans to mix things up a bit. I didn’t use vanilla extract in the cake because I er, forgot and I reduced the sugar in the icing by 100g because I er, ran out. That’s minimal, mostly unintentional tinkering so this is still basically the Hummingbird recipe and it’s excellent. It’s not quite my ultimate, but it’s definitely food for thought.

This behemoth proved far too much for two people, so I lugged it into work and gave it to my colleagues. It barely lasted a day.

Preheat the oven to 170C. Prepare 3 x 20cm cake tins with loose bottoms by greasing then lining the bottoms with greaseproof paper.

Put the sugar, eggs and oil in a freestanding electric mixer with a paddle attachment and beat until all the ingredients are well mixed (don’t worry if it looks slightly split). Slowly add the flour, bicarbonate of soda, baking powder, cinnamon, ginger, salt, orange zest and vanilla extract and continue to beat until well mixed.

Stir in the grated carrots and walnuts by hand. Pour into the prepared cake tins and smooth over. Bake in the preheated oven for 20–25 minutes (mine took 40 minutes, which seems to be the feedback from other cooks, too), or until golden brown and the sponge bounces back when touched. Leave the cakes to cool slightly in the tins before turning out onto a wire cooling rack to cool completely.

When the cakes are cold, spread about one-quarter of the cream cheese icing over it with a palette knife (I used less). Place a second cake on top and spread another quarter of the icing over it (again, I used less). Top with the last cake and spread the remaining icing over the top and sides. Decorate with walnuts around the edges and chopped pecans on top. Hummingbird suggest adding an extra dusting of cinnamon but I’m really not into that at all – the cake is now delicious.