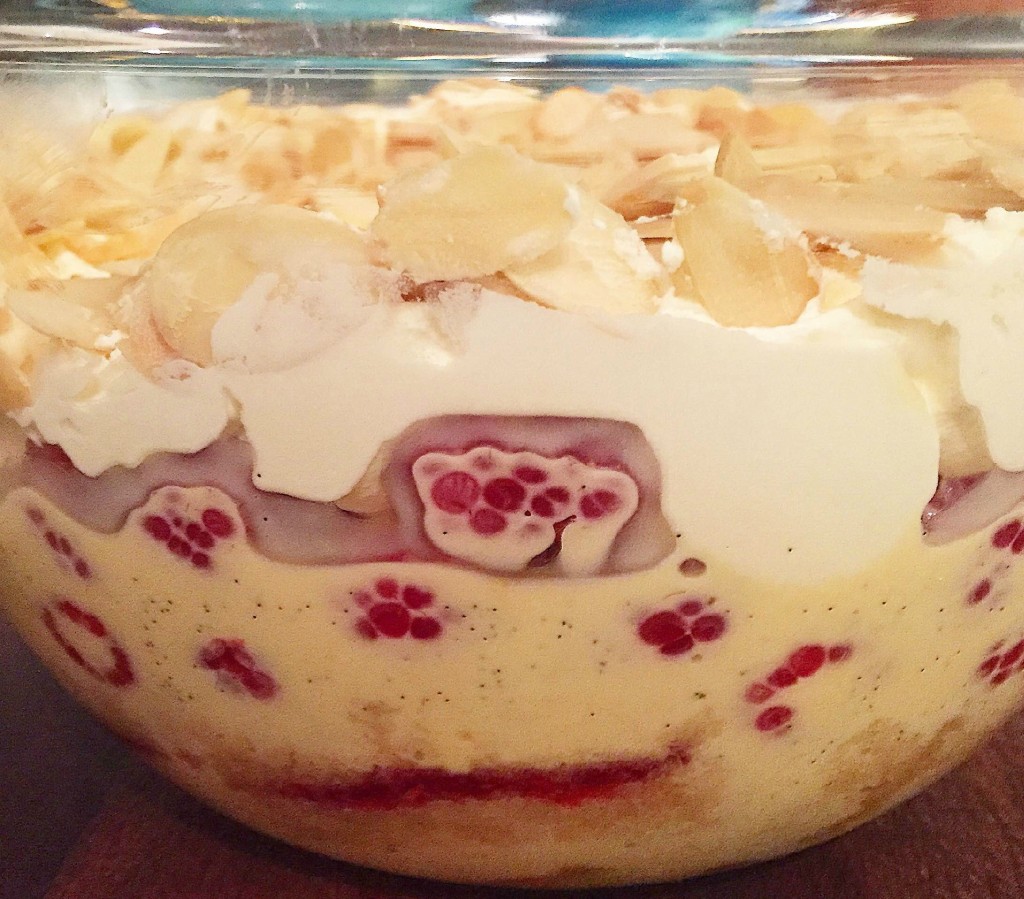 Ooof. So that’s that, then. Christmas is done. I’m convinced that all the over eating is due to the fact that the run up is so stressful. Presents, people, parties. It all adds up to a big ball of anxiety, no matter how much you enjoy the bits where you’re chucking gin down your neck or eating gravadlax in bed while watching Harry Potter.

New Year’s Eve also happened of course. I’ve stopped going out on NYE, as I expect many of you have. Now, it’s all about MASSIVE STEAKS. As usual I stood in my favourite local butchers, Flock and Herd, encouraging the nice meat man to inch the knife further and further along until the steak was borderline obscene before triumphantly announcing, “PERFECT! Two of those, please” then bouncing off to spaff more money on excellent cheese.  We cooked the steaks on the BBQ and ate them with bearnaise,  potatoes sauteed in goose fat and a herb heavy salad. After that, we had trifle. I wasn’t going to write about it, but it was my best ever, so here we are.

Trifles are often rubbish because they’re essentially very simple, so we end up with all kinds of variations which are arrangements of confited fruits, flavoured custards or (so 2015) salted caramel. I like them to be traditional, but this year I had a happy accident when I subbed in Madeira cake, because the shop had run out of the cake I wanted. It’s lovely and buttery-rich but also dense, so it soaks up the booze without going all wet and bitty at the bottom which is something that has always made me deeply uncomfortable. I sliced it and spread with raspberry jam a la Delia and Hoppy, as jelly in trifles is also gross, then soaked it in Marsala (picked it up by mistake instead of Madeira – again, lovely), topped with raspberries (their acidity is perfect with all the sugar), homemade custard (I’m not an animal), whipped cream, toasted almonds. Done.

This, for me, is the perfect trifle.

For the custard (this is Delia Smith’s recipe)

Toast the flaked almonds in a dry pan or under the grill until golden. Set aside. Slice the Madeira cake into little fingers, then make sandwiches with the raspberry jam. Use it to line the base of a bowl (preferable clear so you can see the layers), then pour the Marsala evenly over the top and set aside for it to soak in.

Make the custard by putting the double cream in a saucepan and heating. Scrape the seeds from the vanilla pod and add them to the cream, along with the pod. In a bowl, mix together the egg yolks, cornflour and sugar. When the cream is hot, add it to the egg mixture, whisking it constantly. Return the mixture to the pan on a low heat and cook, stirring all the time until it is thickened. Set aside in a shallow dish with a piece of greaseproof paper on the top (touching the top of the custard, to stop it forming a skin), until cool.

Layer the raspberries on top of the Madeira cake, then add the cooled custard. Whip the cream to soft, floppy peaks and spoon on top. Finish with the almonds.