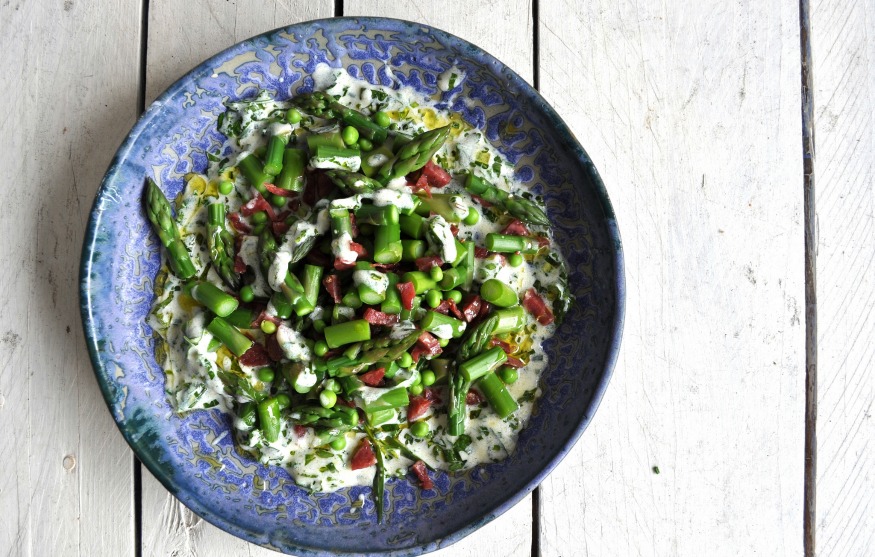 I’ve been sick for the last week and holy crap if it hasn’t been the most boring stretch of time in recent memory. The thing about being low-level sick is that you feel too awful to do anything, but not quite bad enough that you can ignore all those e-mails rolling into the inbox, shouty and attention-seeking like wheels on a fruit machine. Being self-employed is a wonderful thing in many ways, but one of the major downsides is that when you’re ill, there’s no one else to take over. You have to carry on because you made your choices.

There’s also the isolation. If I didn’t go to the gym (yes I have been working out, thanks for asking), then some days I actually wouldn’t see another living soul apart from the cats, and although wonderful, they’re a bit light on chat.

As soon as I could move again even slightly (Lemsip Max Strength Cold and Flu Capsules are the freakin’ future), I was craving Many Green Things. I wasn’t even interested in carbs, which is unheard of since that time I got salmonella in Borneo and couldn’t eat anything without… actually never mind. I wanted vegetables, and I wanted them chopped so I  could just sit in bed and fork plant niblets into my mouth like an endless vitamin conveyor belt.

I added some cured pork too, which I had because… actually, this seems like a good time to tell you about the ‘snacky box’. So we have this plastic tub in our fridge which is always full of meat and cheese offcuts. They come from D’s wine bar, (I’m calling him ‘D’ now to avoid usage of unsatisfactory ‘significant other’ words) because there comes a time when the ends are too small to serve to customers.

Think Tomme de Savoie, ends of Iberico ham, mini lumps of lardo. You get the idea. I like to use these small quantities to pep up salads. Here I’ve used the end of some cured ham or other, diced and then fried until crisp – you could use any number of fatty cured meats really, or even diced English ham (but don’t fry it).

Apart from the salty meat addition, it’s all fresh ‘n green and in keeping with that, I’ve done a light buttermilk dressing full of English garden herbs. I don’t have a garden, but if I did it would have a vast, tangled herb bed alongside rambling roses and beds of wildflowers with fuzzy stems and floppy, dusky-hued petals. I bought my herbs from Sainsbury’s and had to use my imagination.

Cook the diced sausage in a frying pan until the fat has come out and it’s crisp. Drain on kitchen paper.

Vigorously whisk the buttermilk, olive oil vinegar and a pinch of salt in a bowl or shake in a jam jar. Stir in the herbs and check for seasoning.

Mix everything together and serve. You won’t use all of the dressing (or you might, I dunno, it’s your life).