I sharpened my elbows and scythed through the hoards of tourists lining the South Bank, eyes firmly on the prize: Pitt Cue Co. Stationed underneath Hungerford Bridge, a purpose built van is serving up American-style BBQ for the next four glorious months; be still my beating heart. A friend and I have been waiting for this place to open for weeks, following their every move on Twitter, waiting for that call. As said friend is currently living it up in Japan eating warm cod’s sperm (I’m told), I took it upon myself to check it out and report back.

This food is different to the BBQ style we are used to in the UK; Americans, as far as I can tell, tend to dry rub large pieces of meat then smoke them for a long time, cooking indirectly, before finishing with sauce. Pulled pork with slaw and pickles anyone? Brisket with beans and more pickles? Ribs? Rotisserie chicken? Smoked corn? Hello! No woman should plunge into a meat feast without lining her stomach appropriately; we ordered two ‘picklebacks’, which come either with, or without, ‘skin’. A pickleback for those of you who don’t know (I didn’t), is well popular in the Deep South, and consists of a shot of Bourbon (never too early) followed by an equal-sized shot of pickle brine. The ‘skin’ is strips of pork crackling. You drink the bourbon first, its peaty warmth shooting down your throat, soothing anaesthetic; you follow quick smart with the brine, sweet and really pleasant, extinguishing the effects of the bourbon like it never happened. I felt momentarily sad and empty until a little pot of bubbly pork crackling arrived; we demolished the salty pig snacks in seconds. 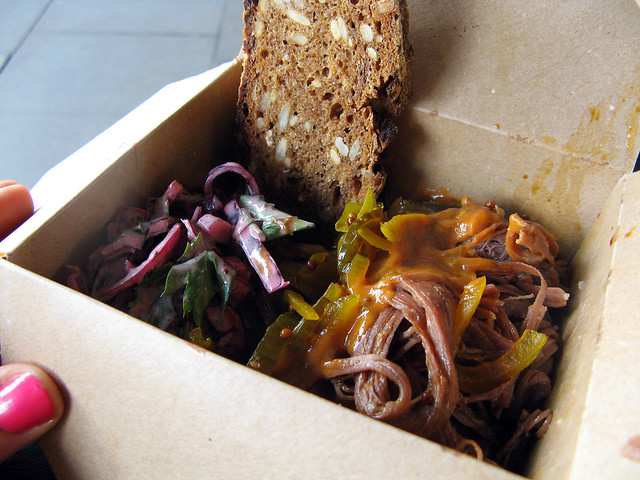 Attention turned to the brisket, billed as a special. Cooked for 12 hours plus, the meat was, in the words of my boyfriend, ‘so tender it’s like beef spaghetti’. Each bite exploded with juice, sauce and all round BOOM, flavour. Wearing white trousers while eating this = major error. It came with slaw (you can choose between beans and slaw) and sweet, crunchy, spiced pickles: inhalable. On the side, two slices of rye, made by Bridget who runs Wild Caper deli in Brixton; she bakes it every morning in the burning furnace of Franco Manca’s pizza oven, before they start service. The pulled Gloucester Old Spot pork had also benefited from 12 hours plus in the smoker. I marvelled at the tender strands which swerved any danger of claggyness. Beans too; baby-food comfort with bite. A hunk of bread is necessary to soak up juices but doesn’t dominate; a wise decision not to serve the meat in buns in my opinion.

We chat to Zeren Wilson as we eat, perching on stools out front. He tells us that Tom Adams, the chef behind the show has worked at the Blueprint Cafe before embarking on this and he’s only 22. He cheers as we order two picklebacks, “the first two of the day!” and he seems bursting with excitement, as he should be. There are drinks too, Brew Dog’s Punk IPA, now in cans (one of my all time favourite beers); The Kernel, a London pale ale; Sambrook’s Wandle; Burrow Hill cider. We are strongly encouraged to think about picklebacking ‘Fighting Cock’ bourbon next time we visit. These people are talking my language. Go.
Pitt Cue Co.

Under Hungerford Bridge from 1pm to about 10pm, Wednesday-Sunday. How to do Afternoon Tea. Properly.