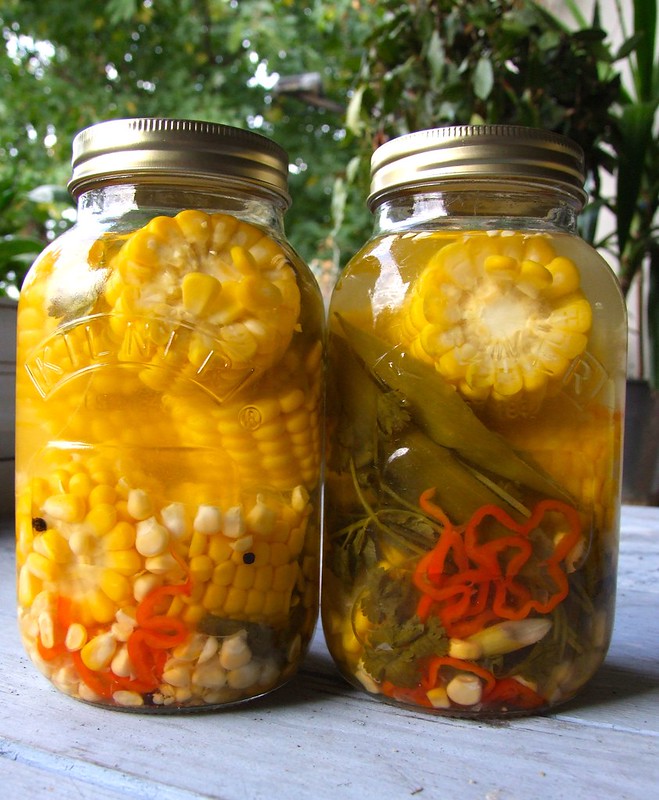 I have adored pickles since I was a little girl. Apparently, at one of my birthday parties I refused to join in with anything because I wanted to hide on the stairs and concentrate on consuming a jar of pickled onions. I didn’t want anyone else to have any. Thinking about it now, I’m not sure too many other 6 year olds were that into them.

Back then I remember only pickled onions, beetroot, cucumbers and red cabbage being widely available in the UK, but nowadays pickling is fashionable. We preserve everything from carrots to American-style watermelon rinds. Corn is particularly good as a pickle. In my recipe there’s a whack around the chops from the scotch bonnet chillies, but they’ve been crucially mellowed by the vinegar, and I can’t wait to finely chop them to use as a garnish. Spring onions and coriander went in too. This pickle is great straight from the jar but I’m going to try it on breakfast tacos. Recipe soon.

Simmer the corn chunks for 4 minutes, then plunge into ice water (leave the shaved corn raw). In a pan, heat the vinegar, sugar and salt until boiling. *See note below if using old style Kilner jars.

Divide the lime juice, chilli slices, coriander, spring onions and peppercorns between sterilised jars. Add the corn and divide the pickling liquid between them. Top up with water if necessary.

Seal the jars and leave for a few days before trying.

* A note about Kilner jars: the new ones have clip seals but if you’re using the old style, it suggests you heat your liquid to 82C rather than boiling, before pouring it into your jars. You then put the round disc on top and screw on the outside bit. The instructions say that a vacuum will be formed inside, and the top will be pressed down and sealed (not popped up so you can press it down with your fingers). What no-one tells you, is that this doesn’t always happen straight away, sometimes it takes a few hours. This is pretty obvious when you think about it. Maybe I was just being a bit dense.