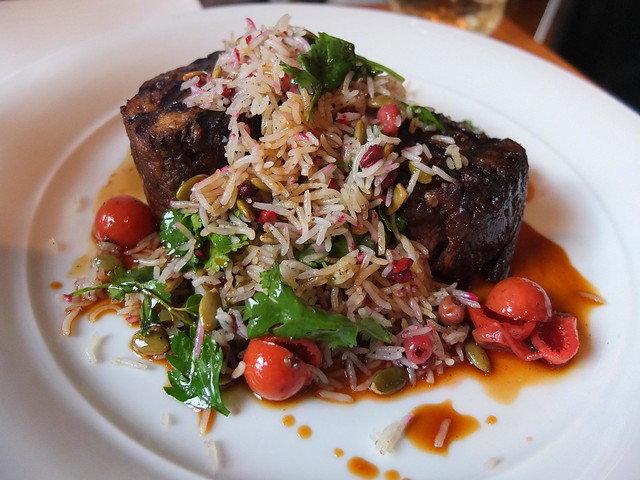 People in the UK are a bit weird about Aussie food, I think. We tend to bang on about brunch all the time. Every time I mentioned brunch to Aussies when I was there, they just looked at me, really confused, and said “maybe in Sydney”. That’s their answer to a lot of things, actually, “maybe in Sydney”, like it’s a different continent or something. That’s a joke, kind of, because Australia is massive. A few people I got talking to would say things like “you’ve been to FRANCE?! Woah, cool!” and I was like, “yeah it’s 2 hours away on a train, seriously, it’s next door and our food’s better anyway”. Then they just stared at me.

Anyway, when I went to Adelaide and Melbourne recently I ate food cooked by people hell bent on creating a cuisine that is 100% Aussie. They’re using native ingredients, and Aboriginal cooking techniques. One of the most famous faces of this new wave of cooks is Scottish, obviously. Jock Zonfrillo moved to Australia in 2000 and became hooked on learning about the history of the land and what it is capable of producing. I ate at his restaurant, Orana. That was a head fuck. I have never sat down to a tasting menu on which there were so many ingredients I didn’t recognise; some of them may well have been plucked from the lines of an Edward Lear nonsense rhyme. Here’s the menu I ate on the night (click to enlarge in Flickr). 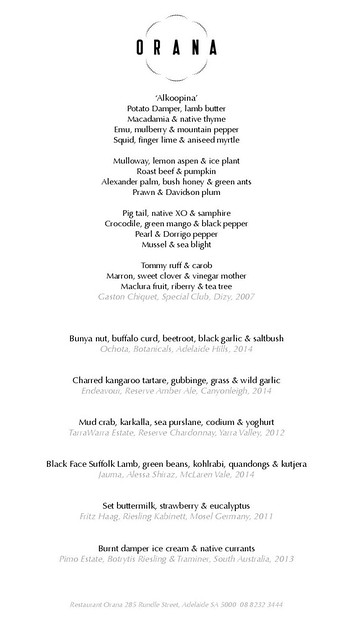 See where I’m coming from? Sometimes, when chefs start using little known ingredients, what ends up on the plate is something that makes you think ‘I can see why no-one else bothers’. Not here. Some of Jock’s food was rub your thighs tasty, and some was just so intense as to be shocking. There were a few touches which will annoy people, like the green ants on one of the ‘snacks’, which give up their formic acid when you bite into them (Zonfrillo worked at Noma). To be honest, I was just thankful they weren’t alive.

Mostly, I really digged Orana. From the mini damper bread I got to toast myself over hot coals and spread with butter made with lamb fat, to the Dorrigo pepper which was so hot I was 30 seconds short of tripping my tits off. I discovered the incredible range of sea succulents that grow on the coast of South Australia, bursting like caviar with every salty bite. I found out about fruits like quandongs, a sort of sweet and sour wild peach. Kangaroo tartare came with something from the ‘gubbinge tree’, which tasted fermented, similar in flavour to the Sichuan vegetables that come in clay pots and open with mighty guffs. There was a wonderful take on brown bread ice cream for dessert (remember that Jock is Scottish), with the charred damper from the starter snacks used instead. The highlight of the meal, though, came in the form of ‘saltbush’ leaves that tasted like the ‘fish and chips’ crisps I used to eat as a kid – fizzing with salt and vinegar flavour and crisp from frying, they prickled in the mouth. Replace crisps with these, I say, and be done with it. Up yours, Walkers. 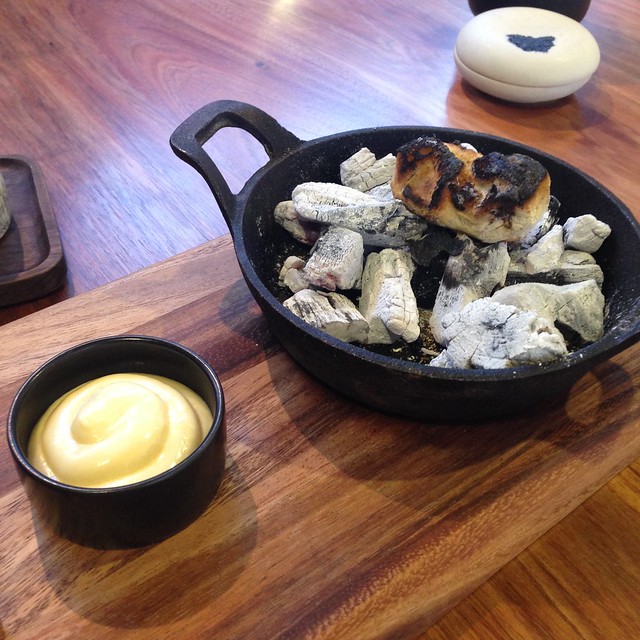 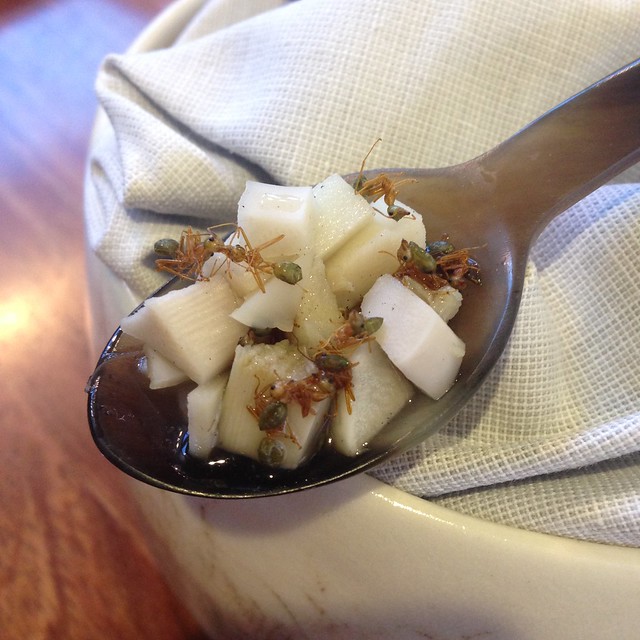 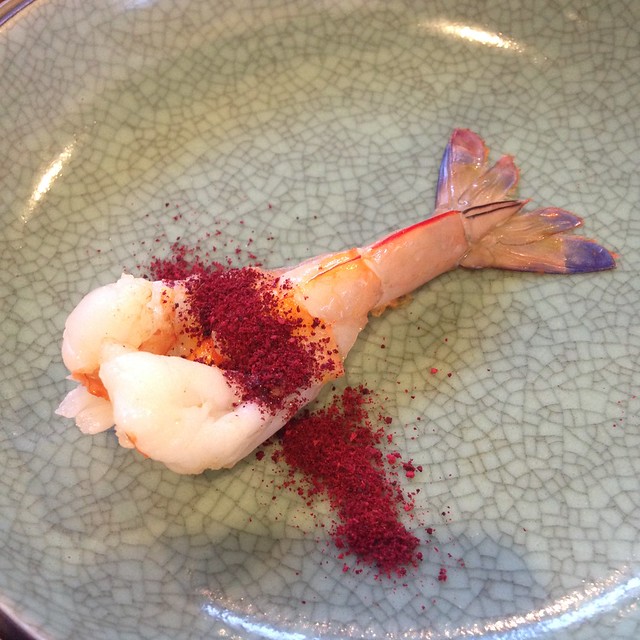 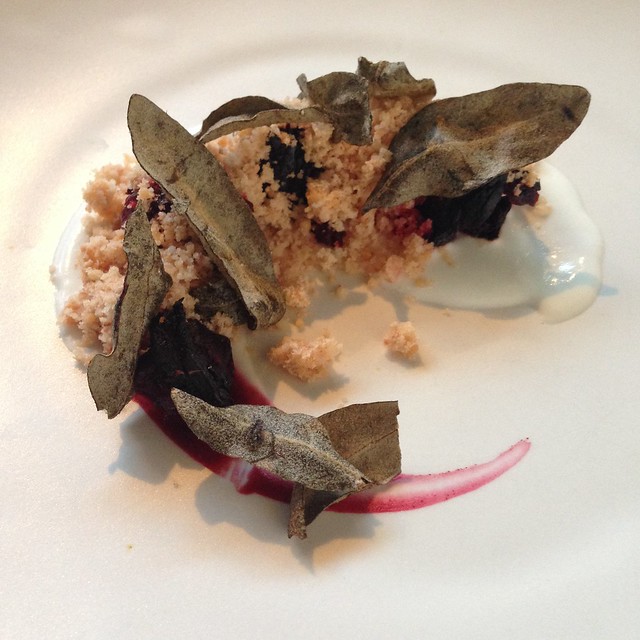 Jock isn’t the only person cooking this way, of course – there’s Kylie Kwong using quandongs and the like in Sydney, and Ben Shewry at Attica. I ate, too, at Charcoal Lane in Melbourne – a much more informal meal, but with a menu full of all the right bits and bobs. It’s a part of Mission Australia, a social enterprise which provides work opportunities for young people, many of them Aboriginal. A summer salad came with Paperbark smoked tomatoes, stone fruits and herbs, popping with colour from edible flowers. Salt bush lamb (top photo) was twice cooked (tender, basically) and served with wild rice, pumpkin seeds and quandongs. Look, quandongs are tasty, okay? 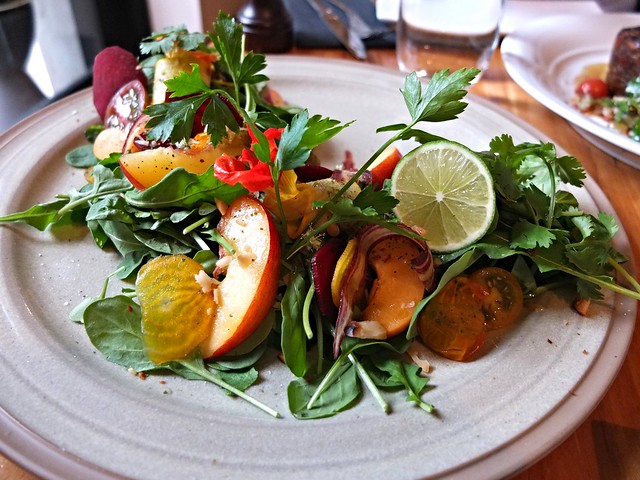 The Australians have developed a very multi-cultural palate, which is great, but they’re sitting on all these ingredients that are too good to ignore, and it isn’t a case of chefs scratching around for scraps either, we’re talking exciting, abundant, genuinely interesting stuff. Fostering a sense of national culinary identity is a wonderful thing of course, and Australia is a country that wants to harmonise past and present. It’s basically a win win situation and you should feel very happy for them, because you’ll need something to be getting on with while you save for a ticket to the other side of the world.

My meals at Orana and Charcoal Lane were paid for by Tourism Australia. Fries with Your Misogyny, Madam?