Fries with Your Misogyny, Madam?

EDIT: This post was picked up by The Guardian, The Metro, The Telegraph, The Independent and The Big Issue.

EDIT 02/09/2014 16.53: Almost Famous have posted a statement on their website saying that they are removing the offensive statements from their ladies’ loos! Result.

Go here to see the statement and a picture of them being removed.

Almost Famous is the name of a chain of restaurants serving burgers that aren’t very good. That doesn’t bother me, because I just don’t go there. What does bother me is the way they go about their business, because when it comes to decorating their restaurants, video advertising on their website or naming the dishes on their menu, they never miss an opportunity to either sexually objectify women, or use derogatory terms to describe them.

I’ve written about this before. The reason I am writing again is because I was angered by an e-mail I received from a friend who visited their latest opening in Leeds and was seriously offended by what she found in the ladies loos. Painted large and loud on the wall were these messages to women who thought they were okay to just go for a pee in a restaurant. 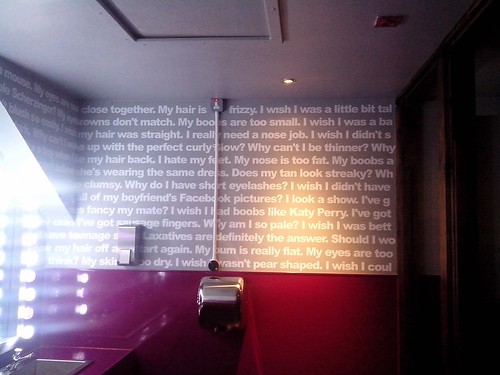 Your eyes do not deceive you. It’s a list of women’s potential insecurities, written on a toilet wall. What could motivate someone to do this? And surely more than one person is responsible. Surely this piss poor excuse for interior design wasn’t dreamt up and sanctioned by a single person? A committee of people must have sat around a table and agreed this was a great idea. Apparently there is nothing equivalent in the men’s toilets. Quelle fucking surprise.

This kind of pathetic woman-bashing is straight out of the Almost Famous school of ‘edgy design’. But what about the people that don’t get angered by this, like me, or my friends? What about the people who are affected and as a result feel awful about themselves and whichever part of their body Almost Famous has reminded them they’re not satisfied with? As my friend put it, ‘we have enough of this shit already in magazines and other media’.

As I mentioned in my other post, their menu writing is equally anti-female. Fancy some ‘slut sauce’ for your burger? How about some ‘bitch juice’ to wash it down? Yes, items on their menu are gleefully named after derogatory terms for women. Almost Famous think that misogyny and sexism is cool. This is completely unacceptable; it’s ignorant and lazy and it should not be allowed to continue. There isn’t anyone to police this kind of amateur bullshit so people need to speak up. People need to complain, because this is 2014. Women are equal members of society now guys! We don’t sit back and let insults wash over us. We don’t tolerate being belittled, or judged sexually and aesthetically. We don’t need you to pitch in with the evaluation of our self-image, and neither do we need to be portrayed as weak or submissive. Do catch up.