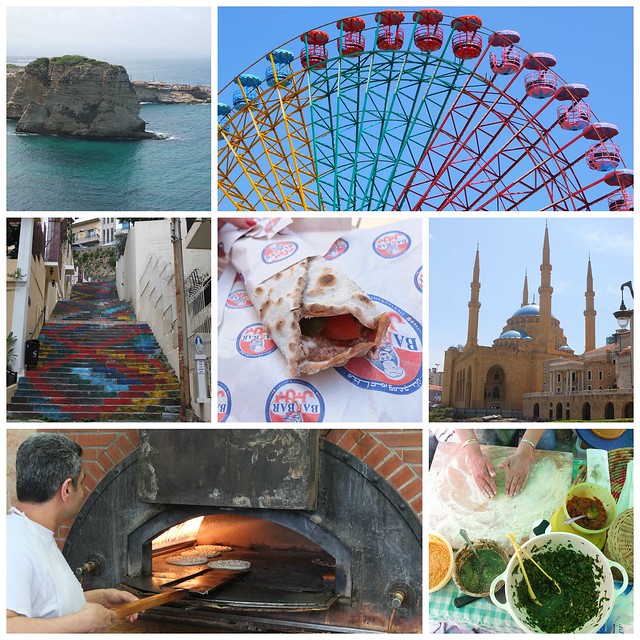 Beirut is a confusing place. It’s also potentially quite dangerous at the moment. Oh and it’s difficult to get around. Also it’s hard to find things. The people speak several languages and use two different currencies. Don’t let any of that put you off though… The food is incredibly good, and when Beirut eventually gets a (well-deserved) break, you should go. When you do, these recommendations may be helpful.

This is a fairly swanky restaurant serving traditional Lebanese food. As we rocked up in a taxi (you have no choice but to travel everywhere by taxi in Beirut), I really wasn’t expecting to find a vast, high-ceilinged restaurant, all lantern twinkles and tiles. We ate in a conservatory filled with palms, which apparently opens up in the summer. I loved it. Perhaps you can get the same food elsewhere for a fraction of the price, I dunno. As I said, Beirut is confusing. What I do know is that everything we had was excellent, and rest assured that we did eat everything. In true Lebanese style we put that table to work. It amuses me/makes me spit splenetic juices to see some central London restaurants now serving this style of food in minuscule portions for extortionate prices. They’re taking the piss, basically, not least because it undermines the spirit of generosity so central to the Levantine meal.

We motored through a vast scarlet sweep of kibbeh nayeh – the national dish of Lebanon – chopped raw lamb mixed with bulgur wheat and spices. If you’re nervy about getting ill with this kind of thing, then a swish place like Abdel Wahab has got to be your best bet for a place to try it. I don’t generally fret in restaurants, but I do remember a particularly hairy moment in Ethiopia, deliberating over a dish of kitfo (chopped raw beef); I couldn’t help myself, wolfed it all down, then dashed back to the hotel in a panic, before necking a shitload of hardcore ‘upset stomach’ tablets I’d got from a private clinic in the hope they’d have some kind of prophylactic effect. They did. Bit of travel advice for you there – throw some money at the potential problem if you want tablets capable of actually killing things that have found their way inside you. Imodium is utterly useless. Is this inappropriate talk for a food blog? I’m afraid I worked in healthcare for years – you get used to talking about diarrhoea over lunch.

Moving on. We mined our way through sumac-sharp fattoush, fresh cheese salads, smoky kebabs, perky plates of snozzcumber-like pickles and – joy of joys – a huge plate of cod’s roe, simply sliced into buttery tongues and served with thick slices of garlic. There was loads of fluffy bread and no room for dessert. 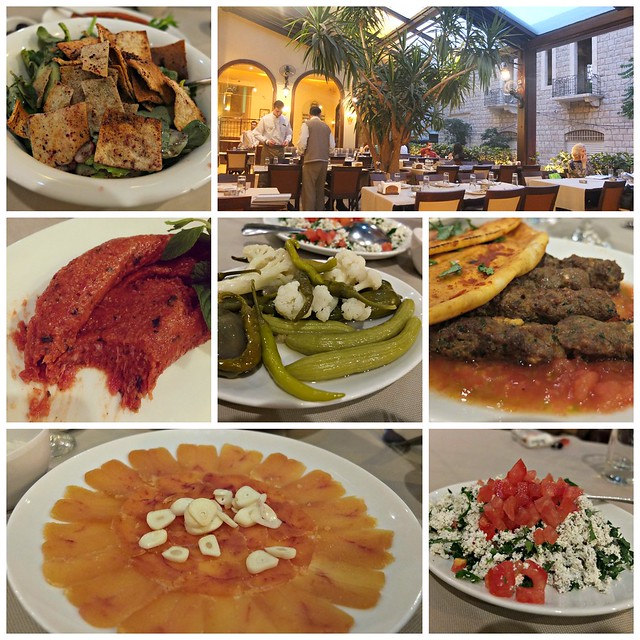 Abdel Wahab, el Inglizi, Achrafieh (opposite a church if I remember rightly).

Souk el Tayeb is officially Beirut’s ‘first farmers’ market’ in the newly rebuilt part of town (post civil war), and Tawlet is the restaurant associated with it. Be warned, market and restaurant are in completely different places. I don’t think this is particularly clear from their website.

I’ve written about both of them in more detail in this post. 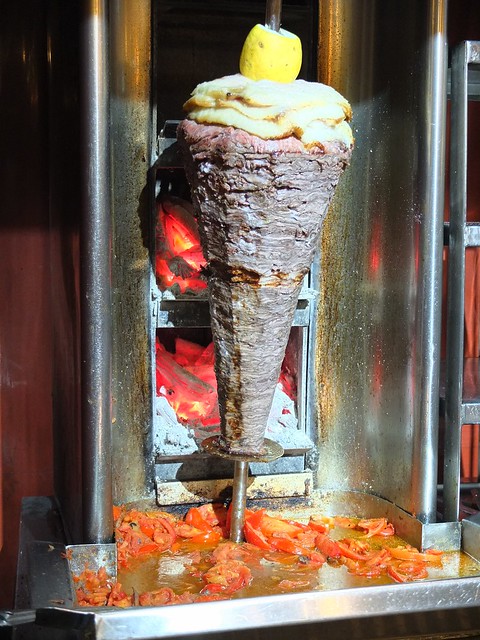 This is the place to get a shawarma. The dining room at Boubouffe is rather charmless, with big TVs hanging off the walls, plastic, easy-wipe tabletops and giant fish tanks containing a few slow, bloated fish. Forget about all that though, because the shawarma is tasty as hell. It’s cooked in front of charcoal and most importantly of all, is topped with a hefty wadge of lamb tail fat, which melts and drips down to baste the kebab as it cooks. Of course I looked into getting some in the UK but we don’t do lamb tail fat. It is possible however, to get kidney fat. It isn’t quite as pungent, but isn’t a bad substitute. Anyway if you can find Boubouffe (again, you’ll see), it’s well worth a visit: smoky meat, bathed in that delicious fat, served under flatbread with roasted tomatoes which have been allowed to cook under the spit, collecting all the precious juices. 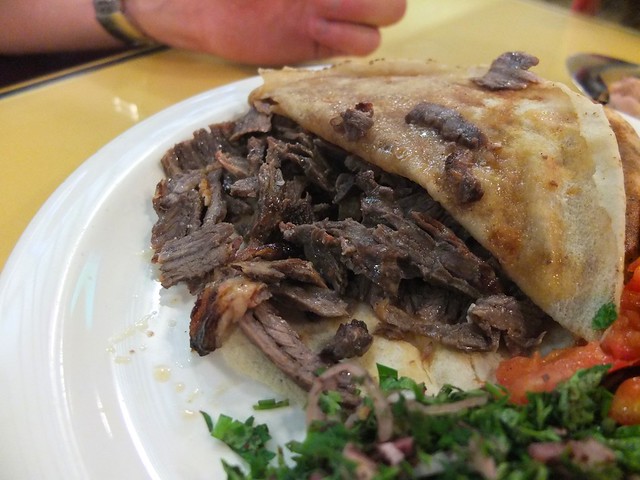 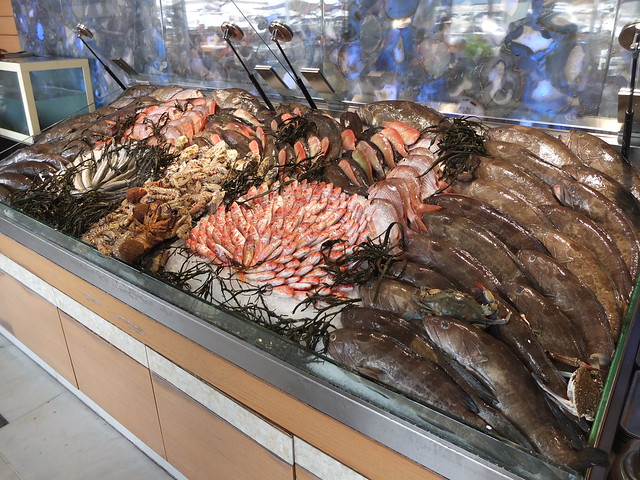 This place isn’t cheap, but if you’re plugging the gaps with shawarma and man’oushe, it shouldn’t matter too much. There are very much two faces to Beirut, the war battered, bullet-pucked, dilapidated face, and the very rich, plastic-boobed, botoxed to high heaven face. This restaurant is popular with the latter. It looks out over a harbour crammed with yachts, and yeah, there are a lot of tossers in this part of town (we spent a long time watching an obviously rich family treat their nanny with barely concealed contempt), but I’ll admit it, I had a great time sitting there sinking a bottle of chilled white and saying things like “can you believe his or her boobs/lips/clothes/bad attitude/scowl/amount of hired help?”

We picked Karam Al Bahr as it seemed like the best of a bunch of places along the harbour front, sticking out amongst the chain coffee shops (Starbucks has reached Beirut) and absolutely packed burger bars. Thankfully, it served some really damn slick Lebanese.

The first thing you notice is that fish counter. Yes someone had gone to town on the arrangement but those fish were still sparkling. You can go up, have a gander, pick your fish and then order with the rest of the meal. The only mildly disappointing thing was a Morton Bay bug, which I had to try because I’d never seen one before and it looked like some sort of giant water woodlouse. Turns out it’s a bit like lobster but nowhere near as sweet. Everything else though, was excellent. We sank a couple of bottles of rose and settled in for a couple of hours, mopping up meze like muhammara, rich with walnuts and sweet with pom molasses, and crunching on fried fish.

And then there was the hummus. This was, without doubt, the most incredible hummus I’ve ever eaten. If anyone in the world can make hummus better than this then I’d like to hear about it, and then I wouldn’t believe them anyway. It can’t be possible. ‘Hummus beyruti’ was a whippy bowl of chickpea white witchcraft. A puree of such superior smoothness we talked about it for weeks afterwards. We still talk about it in fact, and this is nine months later. It’s worth travelling to Beirut for that bowl of hummus alone. Yes. 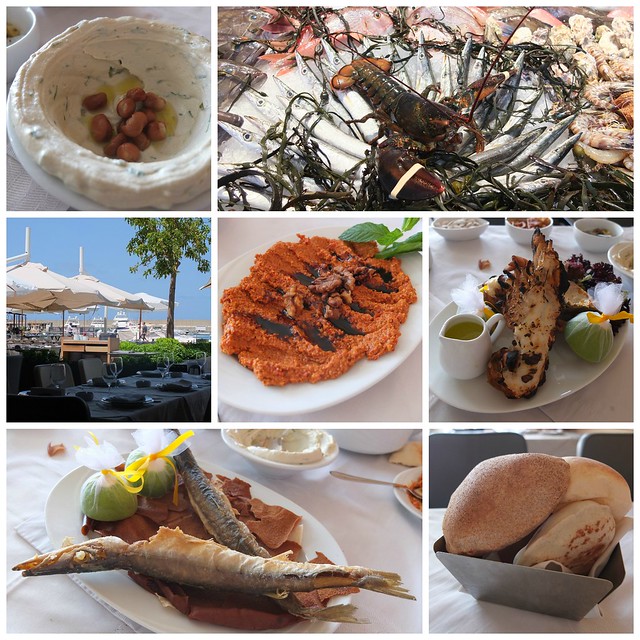 A few final tips and/or points of interest:

– Avoid Middle East Airlines like the plague, unless you want to be served the WORST SANDWICH IN THE WORLD. Also, no booze.

– The hotel room we stayed in had a kitchen area with a sink, an electric hob and cupboards. I have no idea if this is common to all hotels, but I found it amusing.

– Take a mixture of American dollars and Lebanese pounds. Taxi drivers in particular seem to expect you to pay in dollars.

– It really helps if you speak French.

– If you’re in town and you fancy a burger in between all that hummus and shawarma, check out ‘Smoking Bun‘. These guys are proper burger fanatics, and had visited all the big places in London. It was quite surreal to sit in a quiet backstreet in Beirut talking about burgers; so many people in London are ‘over’ burgers and these guys were so bouncy. The translation in this review is quite endearing.

– Wine is expensive. Actually everything is a bit more expensive than you may expect so just be prepared for that.