I’ve decided to separate my Camberwell and Peckham food and drink guide into two obvious sections because it was getting rather large. This is, duh, the Camberwell section, which I’ve updated first. I’ll now work on updating Peckham. That will take longer because everyone has decided it’s a cool place to be and they’re flocking here. As I always say, that’s simultaneously brilliant and annoying.

Anyway check out that photo of lovely leafy Camberwell up top (photo by Peter Gasston on Flickr). People tend to visualise the shitty area around the post office when they think of Camberwell (although that’s recently been given a makeover), but actually the majority of the area is really pretty. I love all the leafy bits, particularly around St. Giles Church (designed by Sir George Gilbert Scott) and obviously the wisteria tangled Camberwell Grove, where some of the houses go for millions. The Camberwell Beauty butterfly was also discovered in the area, although now is found only in Northern Europe. The closest you’ll get to seeing that in Camberwell is the mural on Wells Way.

Silk Road is simply one of the best Chinese (Xinjiang) restaurants in London, full stop. I have only met two people who didn’t like the food; everyone else loves it to the point of obsession. I’ve actually had to limit the amount of visits I make there for fear that the worst will happen and I’ll get too familiar. Best dishes: cold seaweed salad thing; cumin lamb skewers; home style cabbage; pork with fungus; home style aubergine; fried dumplings; smacked cucumber; lamb shish noodles; their handmade noodles in anything. It’s virtually impossible to spend more than £15, including drinks.

This for me is the best Eritrean/Ethiopian restaurant in London. I went to Ethiopia and I can tell you that this is absolutely the real deal. It is also run by the nicest lady. I crave injera like nobody’s business and I am currently working on a recipe that is practical. In the meantime, it’s plenty of scran at Zeret Kitchen for me. Read Chris Pople’s review of a meal we had here. A Turkish grill restaurant that is never less than rammed. F M Mangal are famous for their spice-smeared flat bread and pomegranate dip with comes with grilled onions and garlic cloves. Fairly recently I discovered the takeaway section at the front, which is where I am usually to be found ordering a tuvuk sis, a chicken kebab which comes with salad, chilli and garlic yoghurt sauce, all wrapped in a (crucially) thin wrap which makes eating it all too incredibly easy. The Turkish salad is the best side dish. Always order a double raki while you wait. I hesitated to put Wuli Wuli in to be honest; what used to be a really good Sichuan restaurant just suddenly went downhill when they started toning down the amount of chilli and Sichuan peppercorns in the food. It all became a bit tame which was hugely annoying as I used to order from them once every few weeks. Still, it’s worth giving them a go. Also I should say I haven’t been for about a year. Make sure to order from menu B. I have a copy on-line here. I’d avoid the food in the main but Kazakh Kyrgyz is such a fun place to have a drink just because it’s so ridiculous. There are mannequins in the corridor dressed in Turkish outfits, they have Turkish baths, the restaurant boasts a stream with a bridge over it and, well it’s just so silly it’s brilliant. Also, where else in Camberwell does one get a glass of Georgian wine?! Read my full post about it here.

I’ve had an utterly exquisite squid ink pasta dish here and I’ve had a god awful dessert. The best thing about No. 67 though is the space itself; all cosiness and twinkly lights and tables that you nestle into and never want to leave. Okay so it’s not the most amazing banh mi in the world but come ON, we are in Camberwell, we are not overwhelmed with choices. I actually really enjoy the ‘chicken satay’ – novel in that it doesn’t taste anything like chicken satay. Review on my sandwich blog here. 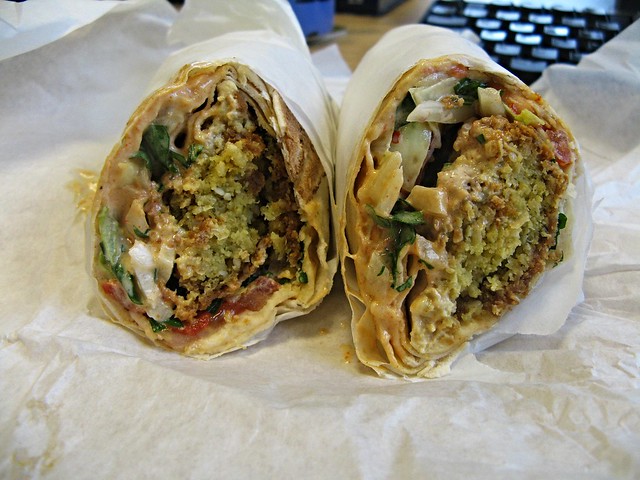 No prizes for guessing what these guys sell. It’s so sparse inside you’d be forgiven for thinking it was one of those shops you used to buy weed from that would just have a fish tank in the corner and a man behind the counter or something. What? Someone told me that okay? The falafel is actually rather decent and they will wang it into a wrap with really fresh salad, sumac dusted onions, a garlic sauce and a chilli sauce that actually has a bit of heat to it. Not a lot, but a bit.

This is really both a restaurant and a pub but it’s so hardcore on the food I’m sticking it in this section. I’ve written a full post about it here. 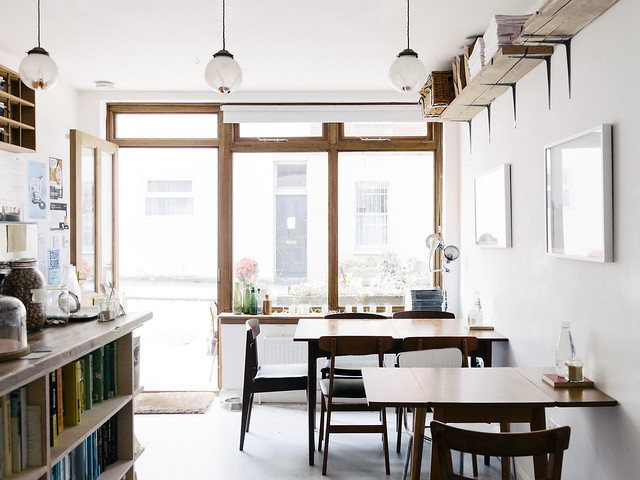 This bright and airy little cafe is now my first choice for early morning meetings. They serve bacon butties, salads, charcutierie, cocktails, coffee. They sell a bit of everything, basically, including all the furniture. Yes, all the furniture is for sale.

Despite looking a little bit trendy (filament lightbulbs etc.) this place is actually really cool. Fancy that! These guys do ‘serious’ coffee but they don’t have a manifesto on the wall and they don’t shout at me when I put sugar in it. Yes, that has happened to me before. It’s my coffee, pal, I’ll put hallucinogenics in it if I want to. They also sell Ali Baba juices (see Peckham guide) and the most excellent sourdough from Little Bread Pedlar.

This Neapolitan pizzeria is open and it is excellent. Read my review on Londonist.

This is a restaurant from Mike and Ollie who make these fabulous wraps at Brockley Market. I’ve written a full review which you can read here.

This is more of a gastro pub really, but I prefer to just drink there if I’m totally honest. They do a decent martini, or at least they did the last time I had one which was fairly recently. Aside from that it’s just a really pleasant space to sink a few.

Camberwell’s craft beer pub. It has quite a wide range of beers which change frequently. They had my beloved Jaipur on recently which I still maintain is one of the greatest beers ever produced. It does suffer slightly from Craft Beer Pub-itis which I did a rant about here and the ladies toilets need some attention – HOW LONG CAN IT BE BEFORE YOU REPLACE THE LIGHT BULBS??

This place looks like a bit of a shithole which is why I like it. They have some decent beers on though – I’m told – I went right off ale a while ago, something to do with it being body temperature – like I say I just appreciate the way it’s so bedded in. A proper boozer. It’s got nothing on the Grosvenor in Stockwell but hey, not many pubs do.

So many people rate this place highly that I’m putting it in despite not having had the chance to really spend any time there yet. Despite being rather lacking in charm as a space, The TFC is great for buying cheeses like helim, feta, halloumi and the other ones I don’t know the name of, including those that come in a can. I am more than partial. Herb bunches are large and fresh and they sell the mild, pointed, waxy peppers I became fond of in Hungary. Obviously there are staples like pomegranate molasses, tahini, sumac etc. – ingredients you’d be hard pushed to find in Camberwell (nearest other shop for such delights = Persepolis). They also sell wonderful borek, which I am quite reluctant to tell you about actually, since I am dependent on the supply.

Good for large, flat, sesame seeded loaves at under a quid. That’s the only thing worth buying here, in my opinion. 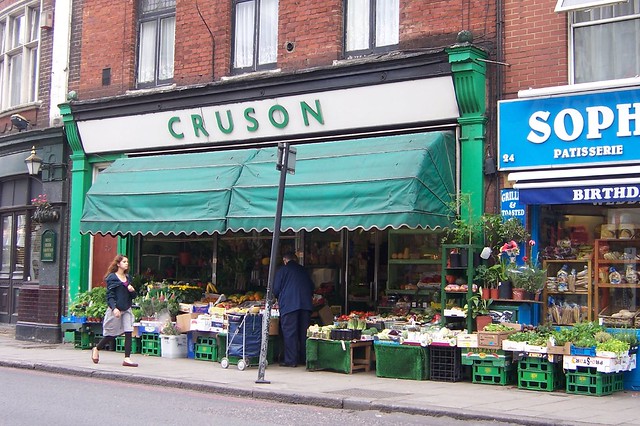 Cruson winds me up in so many ways but it has to be said there is nowhere else in Camberwell to buy a globe artichoke or patty pan squash. The problem with them having so much variety is that a lot of it is always going off. Perhaps that’s why they charge nearly twice as much for a jar of Hellman’s as anyone else has ever done in any shop in the world, ever.

Edit: I am coming round to this place and recently they seem to have been a lot better in terms of quality. There was one incident involving a stick of lemongrass that still makes me fume but hey, I’ve just got to move on…

Fresh blood! The Hill Bakery has been open for just a few months, selling a selection of breads they bake themselves and also some deli products like fresh pasta, cheese and Things in Jars. I find them a bit expensive, but they do have some lovely products like booze cured smoked salmon from The Pished Fish. One to watch as they find their feet.

Oh dear oh dear. This usually consists of three stalls at the most. I bumped in to the woman who manages it recently, and she said the reason it’s so pathetic is that people just don’t come. PEOPLE OF CAMBERWELL! WHAT IS WRONG WITH YOU?

Any other recommendations, do let me know in the comments! I’ve probably forgotten somewhere. Other places I have intentionally left out, such as The Vineyard.