This article first appeared in The Peckham Peculiar.

It’s a bright Sunday morning and I’m wandering around under the railway arches in Blenheim Grove, trying to find No. 229. It’s tucked away in a corner, and inside it are three young guys creating serious cooks’ knives using rare methods. Friends James Ross-Harris and Jon Warshawksy founded the forge, and Rich Warner later joined them. I met with James and Jon to found out why on earth they spend all their time bent over hot steel when they could be down the pub.

“Don’t put that there!” says James as I dump my phone on the floor next to our chairs, there’s a magnet in your phone and this place is full of steel.” I quickly pick it up, none the wiser as to why I shouldn’t leave it there. Apparently all the tiny little filings of steel will find their way into the crannies of the phone and stop it working. I very quickly realise that this isn’t my comfort zone.

The place feels Dickensian at first, as we sit chatting by a forge and an anvil. As we walk around, it’s mostly dust and metal everywhere, plus lots of terrifying tools, and of course, plenty of knives. I guess it’s not that surprising that three young lads want to play around in a workshop with bits of wood and metal, but it becomes apparent quite quickly that this is no joke, even if they did get started “by accident”. Jon tells me how they couldn’t get enough of “making stuff” and would spend all their spare time working on little projects, “we would regularly occupy our weekends with a random DIY project from stuff we collected in skips. These included an outdoor hot tub, a spit roast that runs off an old bike, a meat smoker, a distillery in an old oil drum and a motorised back massager [made] out of a potato. Eventually we came across a knife making video and got James’s old workplace to allow us to use their forge on a Sunday.” This was a major improvement on the forge they had built at home; “we had a big fire and an anvil in the garden.” They must have been really popular with their neighbours. Jon shows me ‘pattern welded blades’, made from Damascus steel, which is when two types of steel are forge welded (fused together at a very specific high temperature) repeatedly to create a single billet that is composed of multiple layers. The resulting blade has a distinctive swirly, organic and very beautiful pattern, something which is achieved by a process of stretching and folding, “it’s supposed to be really difficult to do” Jon says, “so we came down and thought we’d give it a go. We didn’t know anything about it, really, and it went really well.” The boys’ initial success was short lived however, as it turned out the first knife was “a bit of a fluke; we were using the worst methods, I mean what we were doing was crazy, but somehow it worked and then it basically took us over a year to get back to that stage. We just made hundreds of knives, and ruined them all; probably thousands, actually.” They became obsessed with re-creating the knife and “within a few weeks” were spending all their time reading about metallurgy and forging techniques. 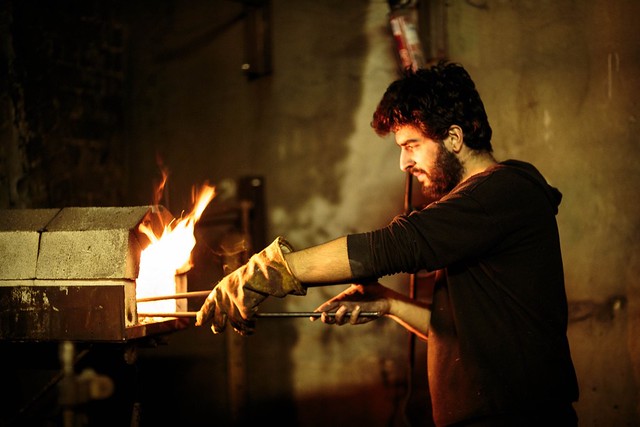 The process of knife making starts in their unique forge, which is fuelled by a mixture of coke and charcoal, to ensure minimal oxidation of the steel. Jon describes how “the blades are differentially hardened and tempered so that their edge is extremely hard while the spine is as flexible as possible. The blades are then highly finished by hand, and sharpened on fine grit Japanese water stones.” A huge amount of work goes into making each knife, with one piece involving around 30 hours of work. “We prefer to work slowly and carefully, says Jon, “and have deliberately avoided automating any part of the process. We insist on completing the entire production process in our Peckham workshop. It’s worth it, because the knife will last you a lifetime. You have to look after them a bit more than standard knives because they’re high carbon steel, so they rust, but you get way more performance from them, so it’s a trade off. We don’t touch stainless, because if you’re a professional knife sharpener you can’t get a proper edge on it.”

The triple layer knives they make, from Japanese blue paper steel, require a similar level of care, but again, have incredible performance, “when steel is really hard, it chips much easier, so that kind of knife gets a really sharp edge, and you get a really good performance on it, but if you’re cutting into a chicken, and hit a bone, you might chip it. So it’s more like a formula one car, not a truck.” The steel is considered superior to other steels amongst knife makers, as it has a very fine grain structure and lack of impurities. 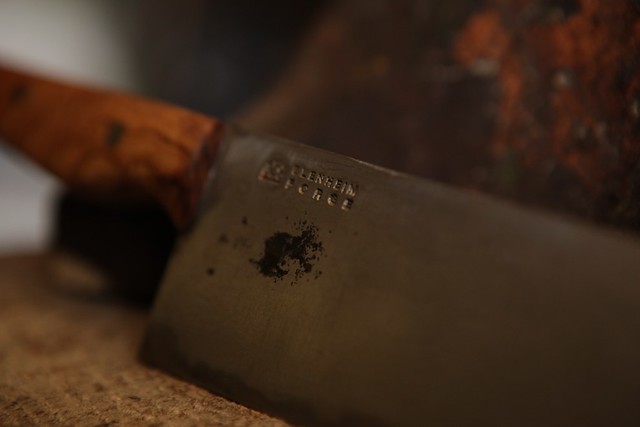 James shows me a knife that someone has just ordered, with a beautiful handle made from ram’s horn. Is it normal for people to bring their own materials for the handle? “Yeah people bring us stuff the whole time; anyone who cuts down a tree” James laughs. “It’s quite good because you only need such small pieces.” And has anyone ever brought anything really weird? “Bits of wood from peoples’ gardens, shotgun offcuts, someone brought in some antler, and it has even been suggested {we} make a handle out of a highly polished turd.” With the knives we’ve been looking at priced at £350, I’m not sure the turd would be the best choice. As a serious cook though, the prices seem reasonable to me. These are knives to invest in, to care for, to cherish and enjoy.

I ask James and Jon about their plans for the future, and it’s clear this isn’t something they’ve really thought about. There is no PR campaign on the horizon, no grand plans for expansion; they really are just three regular young guys who, genuinely, really like making knives. It’s a huge labour of love for them: “for every knife we offer for sale there is at least one other that has either been destroyed through testing its performance or discarded if we are not completely satisfied with it.” They spend every spare moment at the forge, and I note the presence of one of their girlfriends curled up in the corner, reading a book. “This is it” Jon says, “I don’t do anything else. My passion is knives”.