Tours can be bloody awful. I was reminded of this fact recently when lumbered with the Tour Guide from Hell. It’s possible, you see, that I used up all the good tour vibes back in February, when I went on something called the Turista Libre Taco Tour in Tijuana. It was just brilliant fun, involving a lot of excellent food, booze, laughs and an extraordinary amount of glitter.

The founder of this magical foodie fun bus is a young journalist from Ohio called Derrik Chinn, who adopted TJ as his home (TJ is short for Tijuana, do keep up), and now runs tours of monuments, craft beer breweries, water parks and probably some other things, but forget about those, because the taco tour is where it’s at. The idea, basically, is that you get on a rattly old decommissioned school bus (yes like the one in The Simpsons) driven by a brilliantly cheeky moustachioed Mexican guy, and then neck shots of tequila between stopping off at some of the best taco joints in town. Now if that doesn’t sound like your idea of a good time then I’m afraid we will never understand each other. 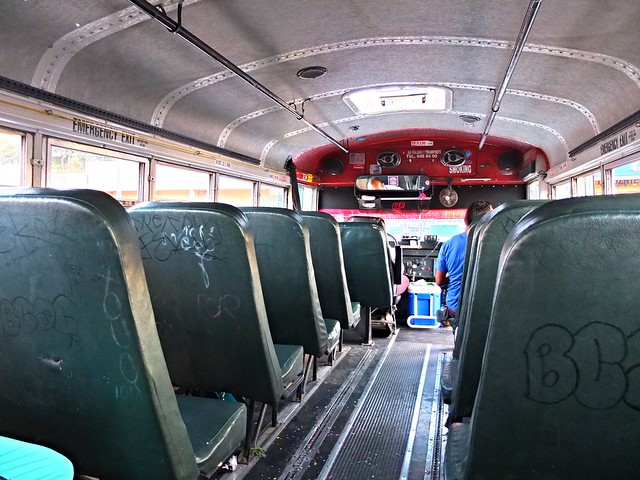 I went on this tour because I was in San Diego, and you can toddle over the border with virtually no hassle at all; it was just a short drive down a freeway for us, past the signs reminding us to ditch the weed and guns because that kind of thing might be okay for dumb Americans but in Mexico we got standards, comprende? So a group of er, 25 of us plus 2 children (I have a friend in California and she has friends and they have friends), piled onto the bus on a hot, bright day, flung open the windows, perched ourselves on tatty leather seats, excavated frosty beers from a cool box, cranked up the Mexican tunes and shot off into town. 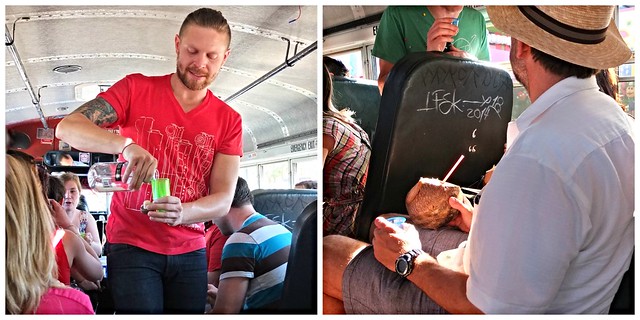 This was my first time in Mexico, and I knew that I would fall in love with the place. It’s a photographer’s dream, a foodie’s dream, a traveller’s dream. Every corner you turn there is something happening, something beautiful, something to get involved with. It’s just as colourful as I expected, both visually and metaphorically; walls stained bright turquoise like the clearest tropical waters, the smell of lime and smoke in the air, and the sense that the pace of life is both hectic and laid back at the same time. The street life is amazing; men walking with guitars slung casually over shoulders, others with ancient ghetto blasters, beautiful faces with skin the colour of teak.

We made our first stop at a place called Machatlán mariscos chávez, for fish tacos, all of us spilling out into the street, hungry for the first fix. I’m not usually a fan of deep fried fish in a taco, but these were so fresh and light that I changed my mind, and I’m a stubborn bitch so that means they were very good. Tilapia strips were meaty, steamed inside their batter, topped with creamy sauce and salsa that tasted of tomatoes properly ripened in the hot, hot sun. Drops of lime juice twinkled in the light as they rained down through my fingers and I remember thinking to myself that I was really very happy indeed. 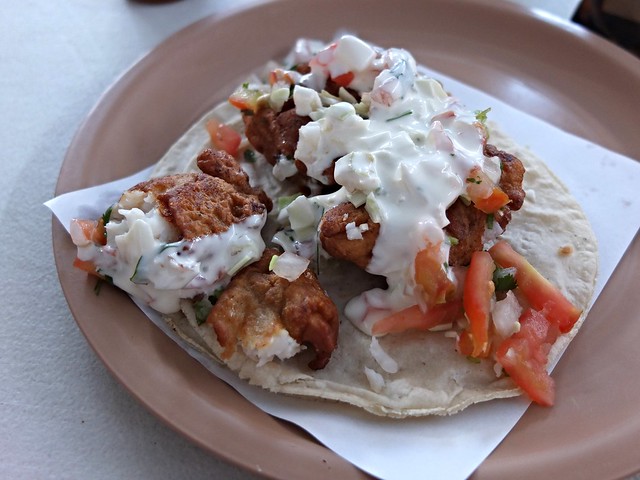 Machatlán mariscos chávez used to be a mechanics’ yard, and that fact is plainly obvious, but also of no importance. What is important, is that there is space for a grill and a taco filling station, and there is space for me to eat the tacos that are made at it. Long tables bear plastic tablecloths, napkins, and several hot sauces ranging from approachable through to Don’t be Stupid. The cooks work at great speed, flipping, filling, saucing, smiling (my friend Chris has a video of this on his blog) and they managed to whack out 25 tacos before our bums had barely touched the plastic garden seats. 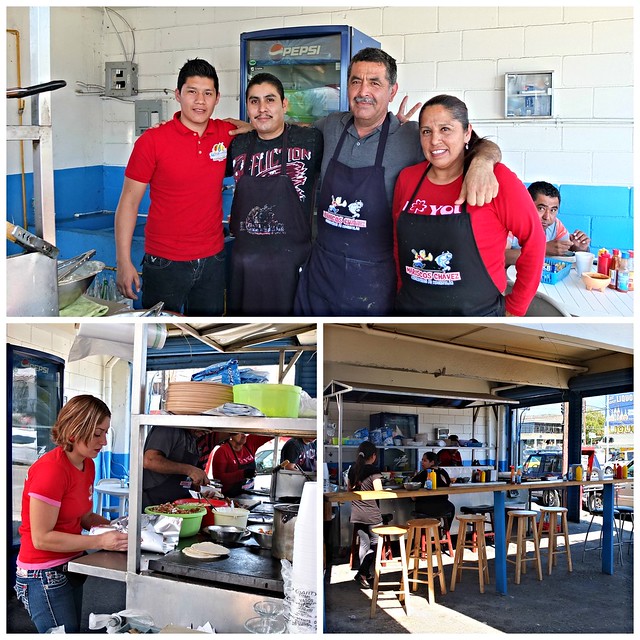 Our next stop was Las Ahumaderas Tacos El Paisa, which was all about the meat. A small space filled with sizzle, sweat and smoke, we packed it out instantly. Their adobada pork tacos are not to be missed if you visit; rich, moist meat, humming with chilli, tangy with vinegar. The tacos themselves were particularly good, too; I’m a huge fan of the earthy flavour of masa, and the tortillas are so soft when freshly pressed, nothing like the hard, mealy discs sold in London markets or online. I’m excited to use my new press at home. Also, I’ve said it before but yes, I will say it again – I was staggered at the pure, sun-soaked perfection of the avocados in Mexico and San Diego; to taste a fruit at its full natural potential, rather than rushed along, squeezed, prodded and nagged into the supermarket – well, it’s just a wonderful thing. 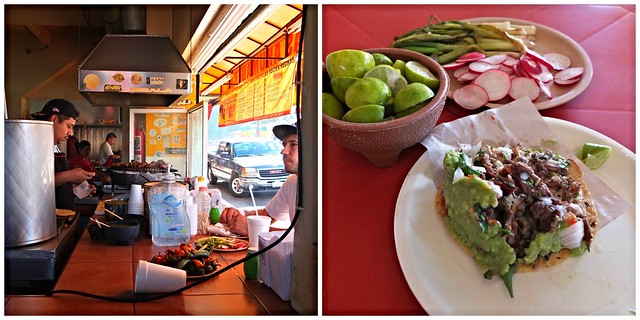 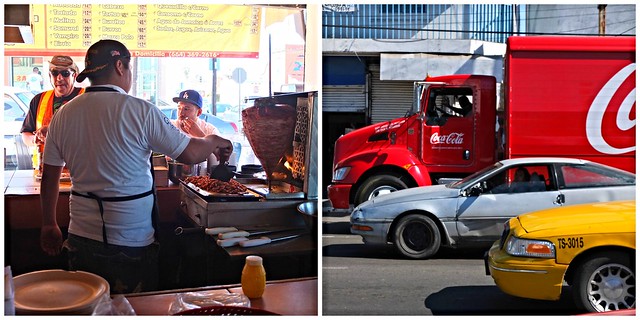 Anyway so then we had some more booze. One of our group had procured a bottle of aged tequila in a nearby shop. Now there’s a sentence that sticks out as marking the beginning of the end. There’s nothing like a few shots of hard liquor to get a group of 25 people fired up for a chaotic food market in a foreign country, and so off we went, absorbed into the crowds, our host shouting desperately after us to meet back at the bus at whatever o’clock. We piled into the nearest bar for a round of frozen margheritas. 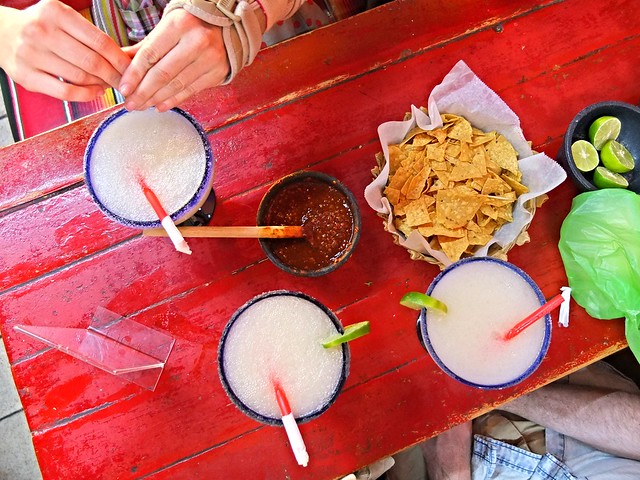 Armed with ice cream headaches we stumbled back out into the market, blinking in the sun, bouncing between shops like a particularly hectic multi-ball bonus in a game of human pin ball. I would’ve loved to have spent more time in the market, truth be told. It was an impromptu stop, and I think he’d do well to add it in as an official item on the itinerary. Here are some snaps. 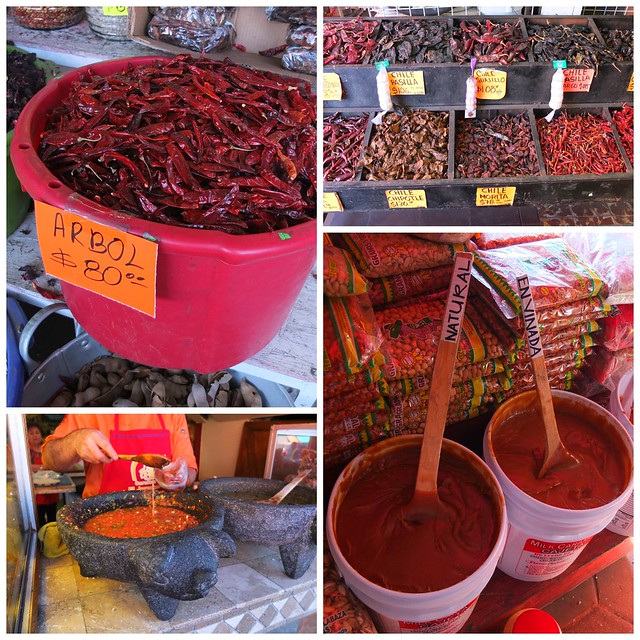 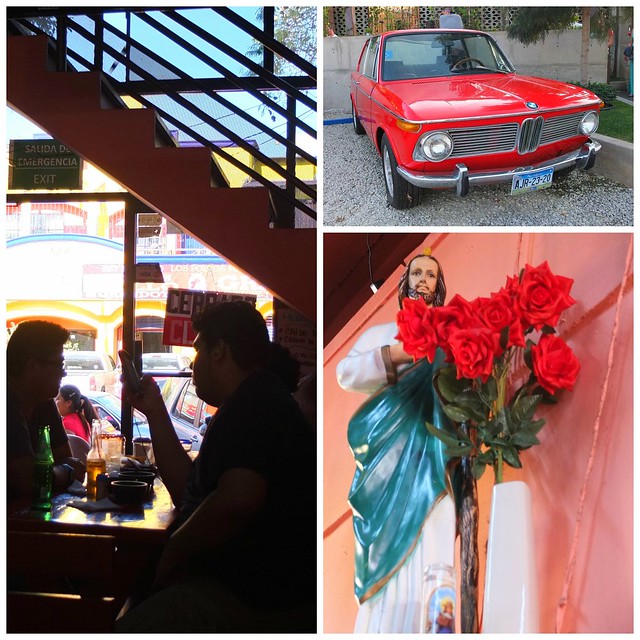 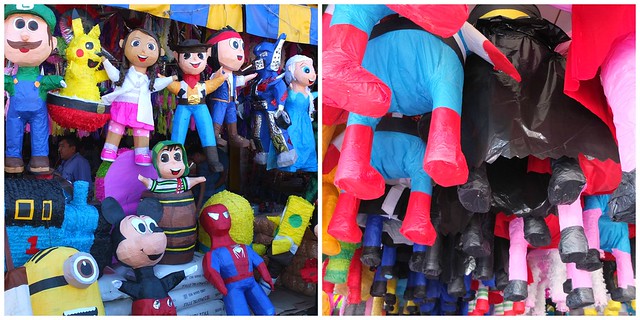 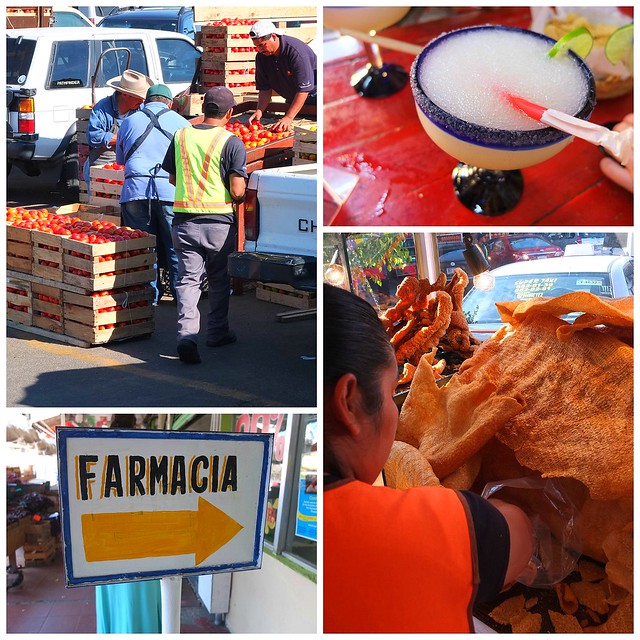 Back on the bus, tanked by now of course, we were in what you might call ‘high spirits’. If you were being diplomatic. Fistfuls of glitter (again, from the nearby shop) flew around the bus, puffing out of the windows and settling on pavements as we careened around corners. Whooping, cheering and singing we pulled up to our final stop, which I can unfortunately only really describe as the genuinely civilised restaurant that it was. I felt a little sympathy for the other customers as we arrived en masse riding a tequila fuelled gust. I struggle to remember the finer details of the food. It was nice, I know that, but fancy tacos served on a wooden board were never really going to do it for me in the same way as the gutsy, street food style of the other places. 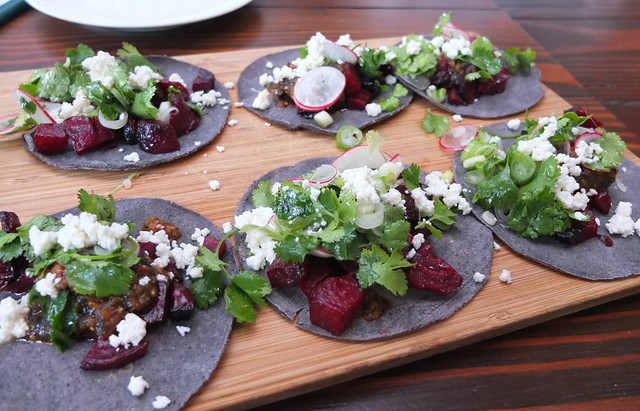 We went somewhere for ice cream afterwards, I think. Perhaps a coffee. I dunno. We partied that bus hard, and I have to say all credit to Derrik for allowing us to do it. To be fair, he was the first one to crack out the hard stuff. He’s only got himself to blame for the clean up job that was several packs of glitter welded to a sticky, tequila-soaked bus floor. We’ve all had parties. We all know he’ll be finding that shit for WEEKS. 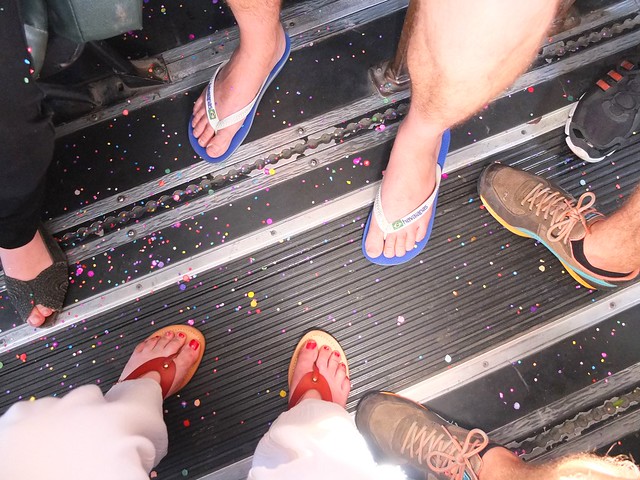 I remember queuing to get back across the border into America, but I don’t remember the security checks or x-ray machines, although I am assured that they did exist. What I do remember, is a hangover the next day, punctuated with lovely returning memories, like bubbles rising and popping on the surface, of the wonderful food and fun we had on our taco tour of TJ. I’d go back in a heartbeat. And I will.

See the Turista Libre website for details of tours. Prices vary depending on numbers – we paid $50 each. 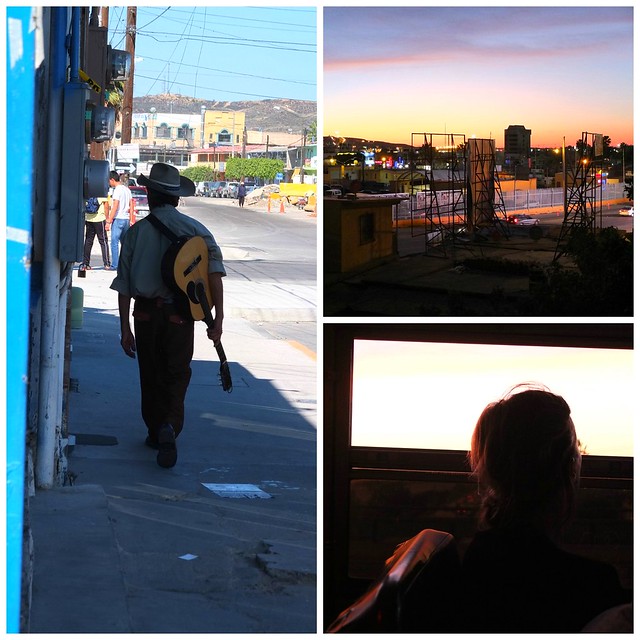 Now *that* is a toad. My recipe for @pitmagazineuk